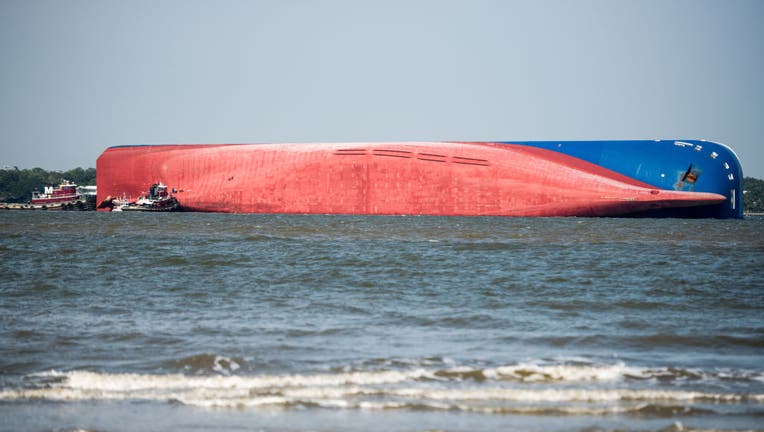 SAVANNAH, Ga. - A U.S. Coast Guard analysis found that a cargo ship overturned after departing a Georgia seaport because of unstable loading that left its center of gravity too high, making the vessel susceptible to rolling over, an expert told officials investigating the shipwreck Tuesday.

Coast Guard Lt. Ian Oviatt testified that his analysis found no fault with the design of the South Korean-owned Golden Ray. He said the ship lacked enough water in its ballast tanks, used to add weight at the bottom of a vessel, to offset that of 4,200 vehicles in its cargo decks above.

A naval architect with the Coast Guard’s Marine Safety Center, Oviatt testified during seventh and final day of public hearings on the Georgia coast to examine what caused the 656-foot (199 meter) ship to tip over soon after leaving the Port of Brunswick on Sept 8, 2019. The crew was rescued safely. The ship remains partly submerged off St. Simons Island, waiting to be dismantled.

The Golden Ray’s instability caused it to lean during a starboard turn, Oviatt said, likely at a sharp enough angle that seawater began flooding the ship through a pilot’s door that had been left open on a lower deck. That flooding would have pulled the ship down even faster, he said.

Oviatt said his team calculated how weight was distributed aboard the Golden Ray using documents from the port showing how its cargo was loaded as well as data stored on the ship’s computer, including how much water was in the ballast tanks.

“The cause of the vessel capsizing was lack of righting energy due to the way the vessel was loaded,” Oviatt said. “The vessel could have taken on additional ballast to be in compliance.”

The Coast Guard analysis showed the Golden Ray failed to meet stability standards required by the International Maritime Organization at the time it capsized, as well as during its two voyages before departing Brunswick, Oviatt said.

He said the crew discharged roughly 1,500 metric tons of ballast water on Sept. 3, 2019, while sailing from Freeport, Texas, to Jacksonville, Florida — the ship’s last stop before heading to Georgia.

That raised the ship’s center of gravity enough that its forward speed and the angle of its final turn imparted enough force to nudge the Golden Ray onto its side. Audio from the ship’s black box recorder picked up the voices of sailors scrambling to right the ship.

But once the Golden Ray began to capsize, there was likely little they could do, said Jeffrey Falzarano, a professor of ocean engineering for Texas A&M University who also testified Tuesday.

“Dealing with a vessel that’s unstable, it’s like trying to balance a pencil on its tip,” Falzarano said. “It’s very hard to do.”

Crew members told investigators the Golden Ray before heading to Florida had taken on extra ballast as a precaution when Hurricane Dorian approached the southern East Coast. They said the additional ballast was jettisoned once the storm passed.

Investigators from the Coast Guard and the National Transportation Safety Board will use evidence from the hearings to publish a report of their findings, with recommendations aimed at improving safety.

The hearings provided “a clear direction for our analysis and recommendations,” said Capt. Blake Welborn, the Coast Guard officer leading the investigation. He has said the final report could take another year.

As a precaution against coronavirus infections, the public was not allowed to attend the hearings in person. Instead, the proceedings in Brunswick, 70 miles (199 kilometers) south of Savannah, were streamed live online.

Separate from the investigation, a multiagency command has spent the past year making plans to carve the ship into eight giant chunks to be hauled away by barges. Officials hope to begin the first cut sometime in October.