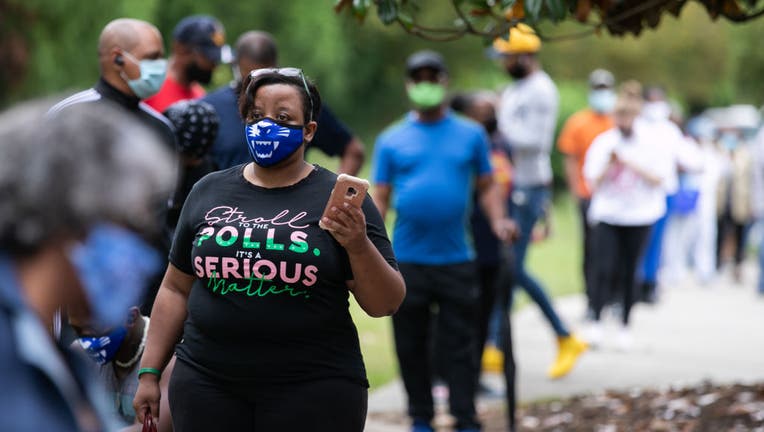 Tamara Ross waits in line on the first day of early voting for the general election at the C.T. Martin Natatorium and Recreation Center in Atlanta. (Jessica McGowan/Getty Images)

ATLANTA - Early voting turnout is continuing to break records in Georgia this weekend.

According to the Georgia Secretary of State, more than 1.4 million ballots have now been cast for November's election.

That number includes both in-person and absentee ballots.

Saturday alone, the Secretary of State reports that more than 60,000 people cast their ballots, bringing the total number of in-person votes to more than 780,000 so far.

On Monday, the first day of early voting in the state, more than 128,000 Georgians went to the polls, a record for the first day.

The high turnout surpassed the nearly 91,000 votes cast on the first day of early voting in 2016 and left eager voters waiting in hours-long lines across the state to cast their ballots.

The secretary of state reports more than half a million absentee ballots have been returned so far - more than double the number reported in 2016.

Election officials and advocacy groups have been pushing people to vote early, either in person or by absentee ballot, in anticipation of record turnout and concerns about coronavirus exposure.

People can continue to vote early in person through Oct. 30. While voters must vote at their assigned polling place on Election Day, they can vote at any open polling place in the county where they live during early voting.

Georgia’s elections have drawn national scrutiny in recent years. That was renewed in June when the state’s primary election was marred by long lines caused by equipment problems and high turnout, as well as coronavirus-related consolidations of polling places and shortages of poll workers.

Concerns about voter disenfranchisement have resulted in a flood of election-related lawsuits seeking to have judges order changes.

A federal judge on Tuesday dismissed a lawsuit filed in August by Democrats that asked him to order Georgia election officials to take steps to prevent long lines at the polls on Election Day. U.S. District Judge Michael Brown wrote in an order Tuesday that it appears election officials have taken steps to address the issues that previously caused long lines.

Voting in Georgia 2020: Registering to vote, absentee ballots, and more

“It is possible, of course, these measures will ultimately prove insufficient and long lines will still arise,” he wrote. “But that is not the point; no one, including this Court, can guarantee short lines.”

Separately, U.S. District Judge Amy Totenberg late Monday declined to order Georgia polling places to increase the number of emergency paper ballots they have on hand to allow voting to continue if there are problems with electronic voting equipment.