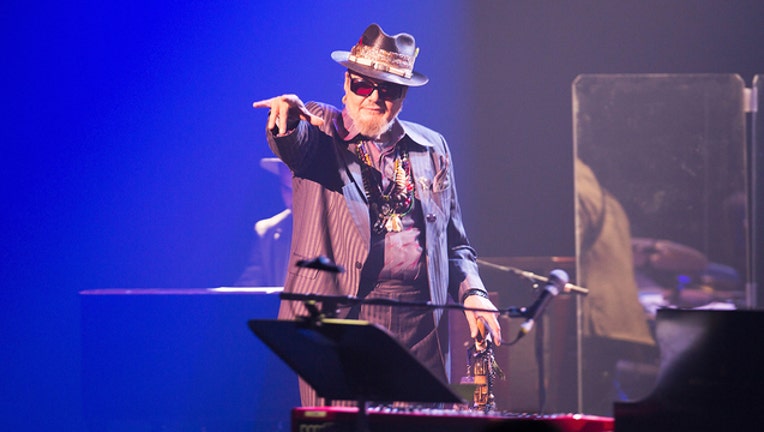 In a statement released through his publicist, the family said Dr. John, who was born Mac Rebennack, died "toward the break of day" of a heart attack. They did not say where he died or give other details. He had not been seen in public much since late 2017, when he canceled several gigs. He had been resting at his New Orleans area home, publicist Karen Beninato said last year in an interview.

Memorial arrangements were being planned. "The family thanks all whom have shared his unique musical journey, and requests privacy at this time," the statement said.

"Dr. John was a true Louisiana legend," Louisiana Gov. John Bel Edwards said in a statement. "He showed the world Louisiana's rich musical heritage, and his passion for music has left a mark on the industry unlike any other."

Drummer Ringo Starr was among the first musicians to weigh in on Twitter. "God bless Dr. John peace and love to all his family I love the doctor peace and love," the Beatles legend tweeted.

Fellow New Orleans singer Irma Thomas said he was loved around the world. "He was just a mystical person," Thomas told WVUE television when asked what made his music special. "He did what he liked best and was very unique with his style."

His spooky 1968 debut "Gris-Gris" combined rhythm 'n blues with psychedelic rock and startled listeners with its sinister implications of other-worldly magic, employing a piano style both rollicking and haunting. He later had a Top 10 hit with "Right Place, Wrong Time," collaborated with numerous top-tier rockers, won multiple Grammy awards and was inducted into the Rock & Roll Hall of Fame.

A white man who found a home among black New Orleans musicians, he first entered the music scene when he accompanied his father, who ran a record shop and also fixed the P.A. systems at New Orleans bars.

As a teenager in the 1950s, he played guitar and keyboards in a string of bands and made the legendary studio of Cosimo Matassa his second home, Rebennack said in his 1994 memoir, "Under a Hoodoo Moon." He got into music full-time after dropping out of high school, became acquainted with drugs and petty crime and lived a fast-paced life. His gigs ranged from strip clubs to auditoriums, roadhouses and chicken shacks. The ring finger of Rebennack's left hand was blown off in a shooting incident in 1961 in Jacksonville, Florida.

He blamed Jim Garrison, the JFK conspiracy theorist and a tough-on-crime New Orleans district attorney, for driving him out of his beloved city in the early 1960s. Garrison went after prostitutes, bars and all-night music venues.

The underworld sweep put Rebennack in prison. At that time, he was a respected session musician who had played on classic recordings by R&B mainstays like Professor Longhair and Irma Thomas, but he was also a heroin addict. After his release from federal prison in Fort Worth, Texas, at age 24, Rebennack joined friend and mentor Harold Battiste who had left New Orleans to make music in Los Angeles.

Rebennack, who'd long had a fascination with occult mysticism and voodoo, told Battiste about creating a musical personality out of Dr. John, a male version of Marie Laveau, the voodoo queen.

In his memoir, Rebennack said, he drew inspiration from New Orleans folklore about a root doctor who flourished in the mid-1800s.

Battiste, in a 2005 interview, recalled, "It was really done sort of tongue-in-cheek."

But Dr. John was born and Rebennack got his first personal recordings done in what became "Gris-Gris," a 1968 classic of underground American music.

In the years that followed, he played with The Grateful Dead, appeared with The Band in director Martin Scorsese's "The Last Waltz" documentary, jammed on The Rolling Stones' "Exile on Main Street" album and collaborated with countless others - among them Earl King, Van Morrison and James Booker.