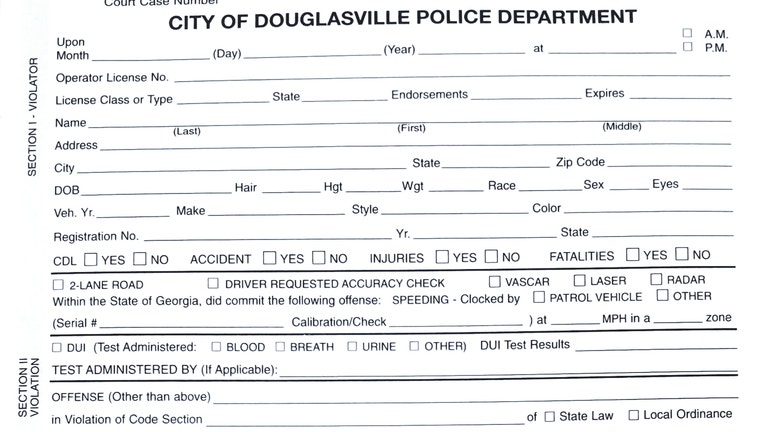 DOUGLASVILLE, Ga. - The police chief calls it a ticket goal. Critics call it a ticket quota.

Regardless, Douglasville's top cop says it was wrong for one of his lieutenants to offer incentives to officers if they wrote a certain number of traffic tickets.

What sort of incentives? How about a BBQ dinner or an award for being the "Top Performer?"

"I know that looks wrong," admitted chief Gary Sparks who grew up in Douglasville and has been in law enforcement for 36 years. "We don't condone that."

Douglasville cops wrote 4,000 fewer tickets this past year than the year before. That prompted some in the department to try to figure out why, and to make some questionable promises. 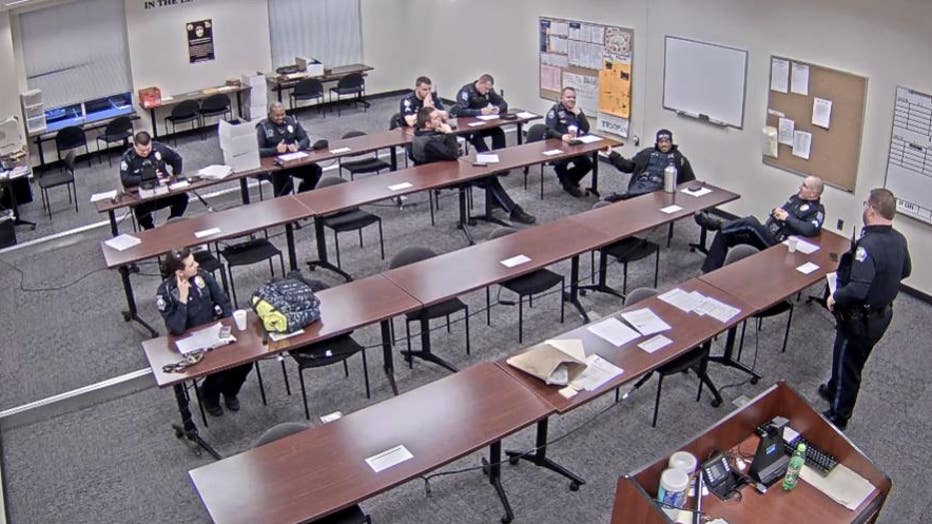 These Douglasville police officers were told if they kept up an average of six tickets each per shift they'd get rewarded.

On Jan. 23, Lt. Brandon Nutter held the usual roll call meeting for 10 members of the night shift. In addition to the usual agenda items, he had numbers on his mind.

"The numbers came out for traffic stops last year dropped from 14,000 to 10,000," he told the officers as they sat at tables listening quietly.

So he asked each officer to write a certain number of tickets for each shift.

"We're shooting for six," Nutter explained. "That's kind of a goal. One thing we thought about is if we average over five a shift ... one month ... quarter, we can go out and buy some steaks, pull the grill out, and do like a steak dinner for the shift."

He suggested creating an award for the “top performer.”

"I think if everyone's hitting that benchmark of five or six ... they should get a certificate for that," he told the officers.

"Captain Weaver said if we write 75 tickets this rotation he will do something for the shift. He may come up and grill out for us or something. Just a challenge for us."

A few days later, the lieutenant emailed the entire shift:

"Captain Weaver said if we write 75 tickets this rotation he will do something for the shift. He may come up and grill out for us or something. Just a challenge for us."

We asked Chief Sparks if Captain Weaver really said that.

"He said he didn't,” answered the chief. "It's a misunderstanding as far as I know."

Does Douglasville have a quota system when it comes to how many tickets officers are required to write?

"No Randy, we do not have a quota system," stressed chief Sparks. 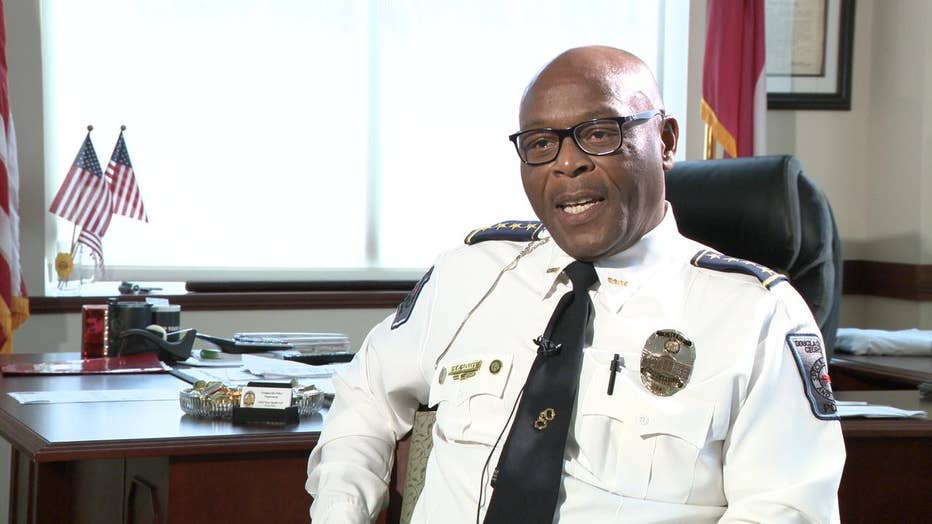 Chief Gary Sparks grew up in Douglasville. He insists his city has never had a quota system when it comes to writing traffic tickets.

Like other cities, Douglasville budgets how much it expects to collect in fines and forfeitures each year. This year it’s $1.8 million. It sounds like a lot, but that's only around 7 percent of all the revenue collected by the city.

Is that really enough to pressure police to write more tickets?

In a series of January emails obtained by the FOX 5 I-Team, police command staff tried to understand why the numbers had suddenly dropped. One analysis showed officers writing fewer tickets but more warnings, fewer tickets likely because they were busy responding to a jump in emergency calls for service last year.

Joanna Weiss is the co-director of the Fines and Fees Justice Center, a nonprofit that challenges cities to rely less on police revenue to balance their budget. She said going on more calls is a good thing.

"Just to say you have to write a certain number of tickets, there's no connection with what the public safety issues are," she explained. "The truth is, if officers are responding to more calls for service, they're being more responsive to the community. So that to me is a very good reason for ticket writing to go down." 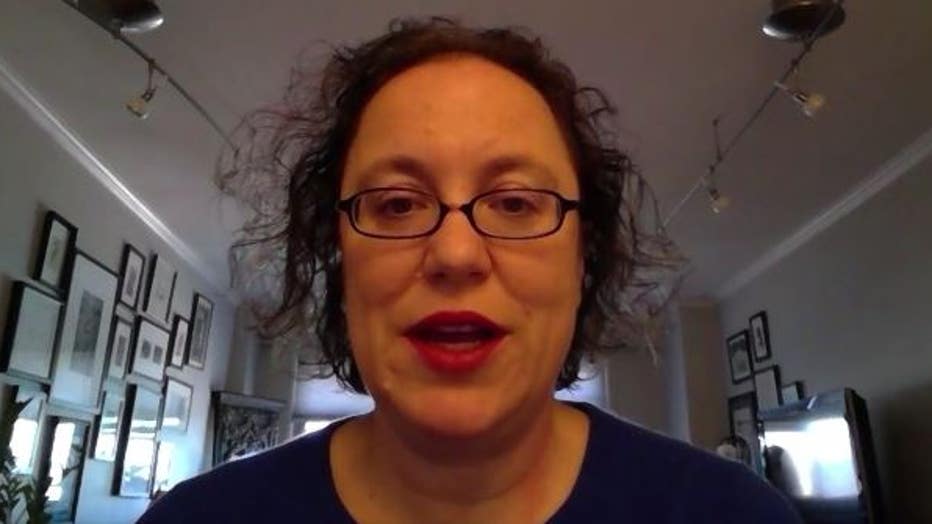 Joanna Weiss is the co-director of the Fines and Fees Justice Center. She's troubled by Douglasville PD's efforts to increase ticket numbers.

She was also disturbed by another document we obtained.

In January, the court clerk's office compiled a six-month report showing how many tickets each officer wrote and how much money those tickets could be worth to the city in judgments. Each officer in the city had a dollar figure connected to their name.

Sparks said he never looked at the money column and is not sure how that information got there. The city clerk who generated the document told us the money totals were automatically included. 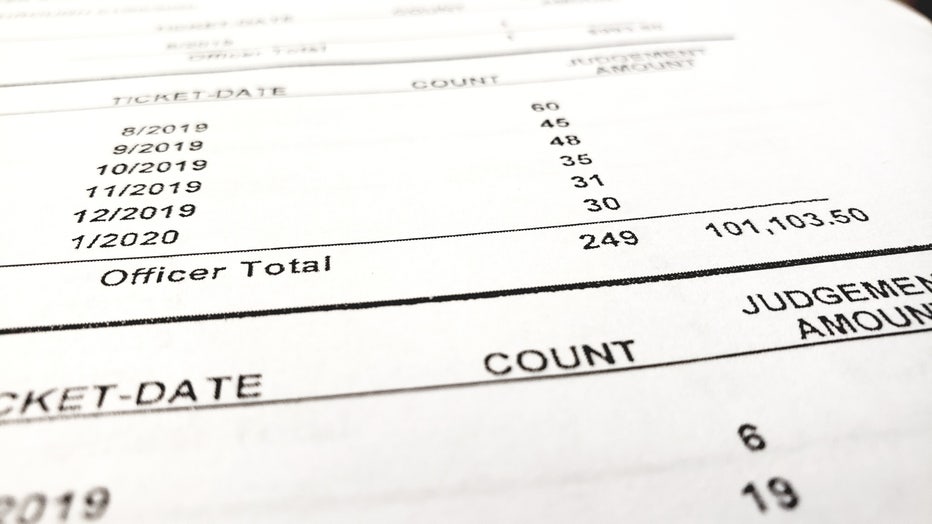 In January, the Douglasville city court clerk's office ran a report listing every officer's name and how much money the tickets they wrote last year could be worth.

"Nobody lost their job (based on those numbers)” he explained. “And nobody going to lose their job in this!"

So why is that information even necessary to have in a report?

“Because that's my job to know as the chief,” responded Sparks. "But we didn't go to any of them officers and tell them you haven't written these tickets."

Not in the video we reviewed from those roll calls. Not individually. Instead, a lieutenant said this to a group of officers:

"They see a drop in traffic stops and they start getting a little upset about it so ... if we're getting our six a night like we're trying to shoot for, we shoot for that, we're going to be doing our part."

An emotional chief told us that lieutenant has been counseled.

"He. Did. It. Wrong. He. Made. A. Mistake. The mistake has been rectified.” Then, turning to our camera, the chief continued. “And to the citizens of Douglasville, there has never been and never will be ... quotas."