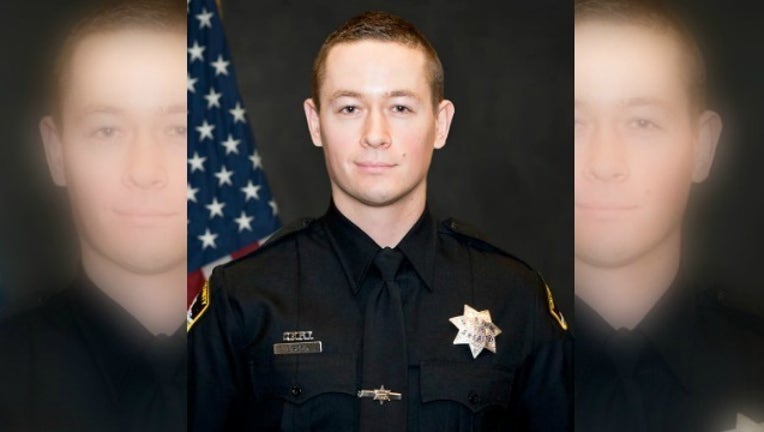 RANCHO CORDOVA, Calif. (AP) - A Sacramento County sheriff's deputy was killed and another wounded in a shootout that started with an argument at a Pep Boys store, authorities said.

The suspected gunman and a bystander were wounded in Monday's shootout but they were expected to survive, Sheriff Scott Jones said.

About 2 p.m., deputies answered a report about a dispute between a customer and an employee at the auto parts store in Rancho Cordova, just outside of Sacramento.

The deputies were answering a "routine call" that gave no indication the customer had a gun, Jones said.

"As soon as they arrived and engaged the subject he turned as if to run or flee and then immediately turned around and started firing without warning," the sheriff said.

Deputy Mark Stasyuk, 27, was shot in the upper body and killed. Deputy Julie Robertson, 28, was hit in the arm but shot back as the attacker fled. He was taken into custody by other officers after a second shootout, Jones said.

Neither deputy was wearing a body camera.

Monday's shooting was the second fatal incident for the Sacramento County Sheriff's Department in little more than a year. Deputy Robert French was killed and two California Highway Patrol officers were wounded last August during an investigation into a car-theft ring in an unincorporated area outside Sacramento.

"It's an incredible hole that never quite gets filled in the hearts of our department," Jones said.

Stasyuk had been with the department for four years, while Robertson has been there for about three years, according to the Sheriff's Department. Both were assigned to patrol in Rancho Cordova, which contracts with the sheriff's office for law-enforcement services.

"We are very thankful for his sacrifice and very sorrowful for his family," Mayor Linda Budge said of Stasyuk.

Gov. Jerry Brown issued a statement of condolence and said flags at the Capitol would be flown at half-staff in the deputy's honor.