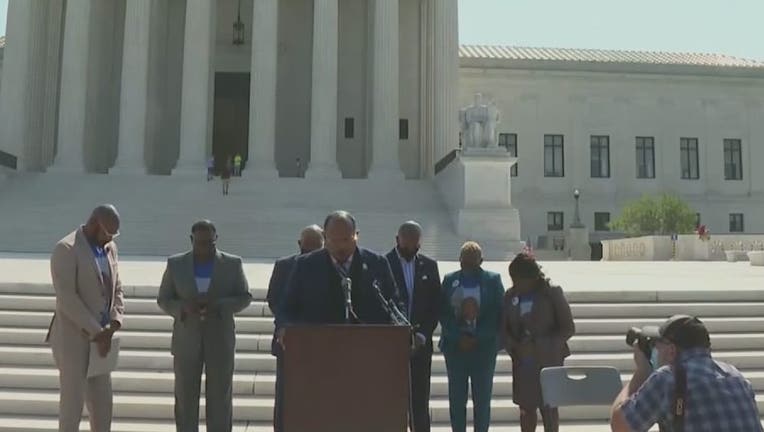 Henry Lewis, the late-Rep. John Lewis' brother, speaks on the steps of the US Supreme Court urging Congress to follow his brother's legacy in the push for voting rights on Aug. 11, 2021 (FOX News)

WASHINGTON - Democrats are renewing their push to enact their marquee voting bill, pledging to make it the first order of business when the Senate returns in the fall even though they don’t have a clear strategy for overcoming steadfast Republican opposition.

Senate Majority Leader Chuck Schumer announced early Wednesday his plan for floor action in September on the bill, known as the For the People Act, which Democrats have tried to pass for months. The measure, blocked by Republicans from the debate in June, would affect virtually every aspect of the electoral process, curbing the influence of big money in politics, limiting the partisan considerations in the drawing of congressional districts, and expanding options for voting.

Democrats acknowledge that their latest effort is doomed to fail — and that’s the point. They are looking to show that Republicans will not waver in their opposition to voting and election legislation, which Senate Minority Leader Mitch McConnell, R-Ky., has called "a solution looking for a problem."

That could help make a case to moderate Democrats that there is little chance of making headway on this key issue for the party unless changes are made to Senate rules that require 60 votes to overcome a filibuster.

"Republicans have formed a total wall of opposition against progress on voting rights," Schumer said just after 4:30 a.m. "That’s what we have come to: total Republican intransigence."

His remarks came after a marathon voting session that paved the way for Democrats’ big-ticket spending goals before the Senate adjourned for its August recess.

"After ramming through this reckless taxing and spending spree, here in the dead of night, they also want to start tearing up the ground rules of our democracy," McConnell said, "writing new ones, of course, on a purely partisan basis."

Democratic leaders have said the voting legislation would serve as a powerful counterbalance to a wave of new restrictive voting laws approved in Republican-controlled states after the 2020 election. But the effort stalled in the Senate months ago.

Liberal activists have advocated for the elimination of the filibuster, though a handful of moderate Democrats, including Sens. Joe Manchin of West Virginia and Kyrsten Sinema of Arizona, have rejected such an approach, denying Democrats the votes needed to make the change. 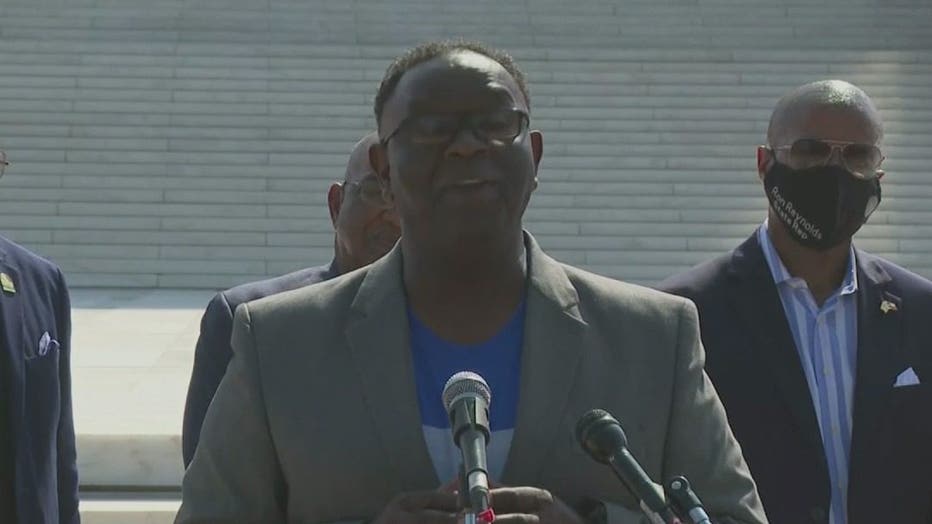 Henry Lewis, the late-Rep. John Lewis' brother, speaks on the steps of the US Supreme Court urging Congress to follow his brother's legacy in the push for voting rights on Aug. 11, 2021 (FOX News)

At a rally held outside the Supreme Court on Wednesday, the Rev. Jesse Jackson and the family of the late Rep. John Lewis, who made voting rights a defining issue of his congressional career, urged Democrats to act.

"Let’s just keep this fight going, keep this drive going, keep his dreams alive, because if we don’t keep it alive then all of his work will be in vain," said Henry Lewis, a brother of the late congressman.

President Joe Biden is also facing increased pressure from the party’s base to get more involved in the fight. Many activists say Biden has only paid lip service to the issue, instead prioritizing a $1 trillion bipartisan infrastructure package, which the Senate approved Tuesday.

With that done, they hope he will be more engaged.

"The White House must now prioritize voting rights legislation with the same level of urgency and commitment as the bipartisan infrastructure bill," NAACP President Derrick Johnson said. "Time is running out."

Though once an area where there could be a bipartisan compromise, election laws have become an increasingly partisan flashpoint after President Donald Trump falsely blamed voting fraud for his 2020 election loss. Republican and Democratic election officials across the country certified the outcome and Trump’s own attorney general said he saw no evidence of widespread voter fraud.

But it’s also proved difficult for Senate Democrats to unify their own caucus around the issue. Manchin initially balked at voting for the bill, though he agreed to do so after Senate leaders pledged to work with him to narrow the measure’s focus.

Speaking from the floor of the Senate early Wednesday, Manchin said he’s worked to "eliminate the far-reaching aspects" of Democrats’ marquee proposal while calling on Republicans to support a narrower measure expected to be released in September — a doubtful prospect.

"I urge my colleagues, Democrats and Republicans, to allow us to debate this critical issue and come up with a bipartisan solution that protects every American's right to vote," Manchin said.

But that’s not the bill they voted on Wednesday.

Instead, they took a piecemeal approach. First, Democrats tried to take up the For the People Act, which Republicans blocked.

After that, Schumer tried to advance other popular provisions from the bill, which would limit partisan gerrymandering and force so-called dark money groups to disclose their donors. The provisions were broken into two separate bills that Republicans also blocked.

"It’s pretty clear to me that we’re not going to get much Republican help, " Schumer told reporters after leaving the Senate floor.

Time is of the essence if Democrats want to get the measure signed into law before the 2022 midterm elections.

"There is a tight deadline for getting all this done," said Sen. Raphael Warnock, D-Ga.