Dr. Jesus Samaniego is the chief of obstetrics and gynecology at Kelsey-Seybold Clinic in Houston, Texas and discusses the results of a recent study that found COVID-19 vaccines could temporarily impact the length of a woman's menstrual cycle. (Credit: FOX 26 Houston/KRIV)

A recent study funded by the National Institute of Health found that a small portion of women who received the COVID-19 vaccine saw a temporary change in the length of their menstrual cycles.

A team of researchers led by Dr. Alison Edelman of Oregon Health & Science University observed 3,959 individuals (vaccinated 2,403; unvaccinated 1,556) and over half of the cohort (55%) received the Pfizer-BioNTech COVID-19 vaccine, 35% received Moderna and 7% received Johnson & Johnson.

Researchers analyzed data from a birth control app called Natural Cycles, cleared by the Food and Drug Administration for women to track their menstrual cycles and tell when they’re most likely to become pregnant.

Edelman said the study included women with "the most normal of normal" cycle length, averaging between 24 and 38 days. Researchers tracked vaccinated women for three cycles before the shots and the immediate three cycles after, including the months they received a dose -- and compared them to unvaccinated women. 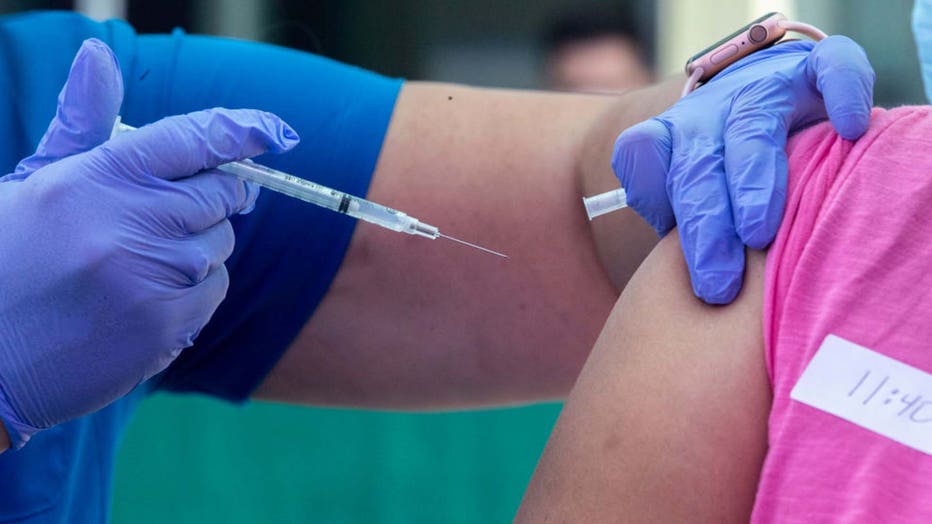 FILE - RN inoculates a woman at a COVID-19 vaccine.

The women who received a vaccine saw an increase in cycle length of nearly one day for each dose, according to a news release based on the study.

"Among women who received a two-dose vaccine, the first dose was associated with a 0.71-day increase in cycle length and the second dose with a 0.91-day increase. After adjustment for age, race and ethnicity, BMI, education, and other factors, the change in cycle length was still less than one day for each dose," the news release said.

The women who received both doses of a two-dose regimen within the same menstrual cycle saw their cycle length increase further—about two days on average.

About 10% of women had a change of eight days or more, but subsequently returned to normal ranges, the researchers reported in the journal Obstetrics & Gynecology published on Jan. 5.

Edelman said one theory is that when the immune system revs up at certain times in the cycle, "our body clock or what controls the menstrual cycle can have a hiccup."

Study authors noted that a woman’s menstrual cycle timing is regulated by the hypothalamic-pituitary-ovarian axis and it can be impacted by life, environment and health stressors.

mRNA vaccines, which is the recipe used for both Pfizer and Moderna, can create a robust immune response which can also be categorized as a stressor in the human body, the study continued.

"It is reassuring that the study found only a small, temporary menstrual change in women," said the National Institute of Child Health and Human Development Dir. Dr. Diana Bianchi, "These results provide, for the first time, an opportunity to counsel women about what to expect from COVID-19 vaccination so they can plan accordingly."

Edelman plans additional study to tell if there are changes in the heaviness of menstrual bleeding or if women who have irregular periods react differently.

The findings provide "important new evidence underscoring that any impact of the COVID vaccines on menstruation is both minimal and temporary," Dr. Christopher Zahn of the American College of Obstetricians and Gynecologists said in a statement.

The Associated Press and FOX 26 Houston contributed to this report. This story was reported out of Los Angeles.