A couple was asked to exit a San Diego-bound flight at Fort Lauderdale-Hollywood International Airport, Florida, on Sept. 8, 2021, following a dispute over mandatory face masks. Credit - Alice Runkevich via Storyful

FORT LAUDERDALE, Fla. - A couple captured in a widely-viewed video was asked to leave a JetBlue flight prior to take-off for failing to comply with the mandatory mask requirement and berating the flight attendants, according to the airline.

The incident happened Sept. 8 on a JetBlue flight from Fort Lauderdale, Florida, to San Diego, California. Video shared by Alice Runkevich, who was also a passenger on flight B6 529, shows the dispute between a man and crew members at the front of the plane.

A female companion, who pulls her mask down under her chin while speaking to other passengers, can also be heard threatening to sue the airline and telling passengers filming the scene to "let it go viral."

The pair both eventually get off the aircraft, which prompted other passengers on board to cheer and applaud their removal.

Runkevich told Storyful that the flight was delayed by roughly three hours and that the incident happened while the plane was fully boarded and on the tarmac.

In a statement, JetBlue said the two travelers had been asked "multiple times but would not comply with the federal mask mandate" and apologized to other customers on the flight who experienced the incident.

"Eventually the customers were asked to leave the aircraft at which time one customer became verbally and physically aggressive toward crewmembers before eventually exiting the aircraft," the airline told FOX Television Stations. "The customers will not be allowed to fly JetBlue in the future." 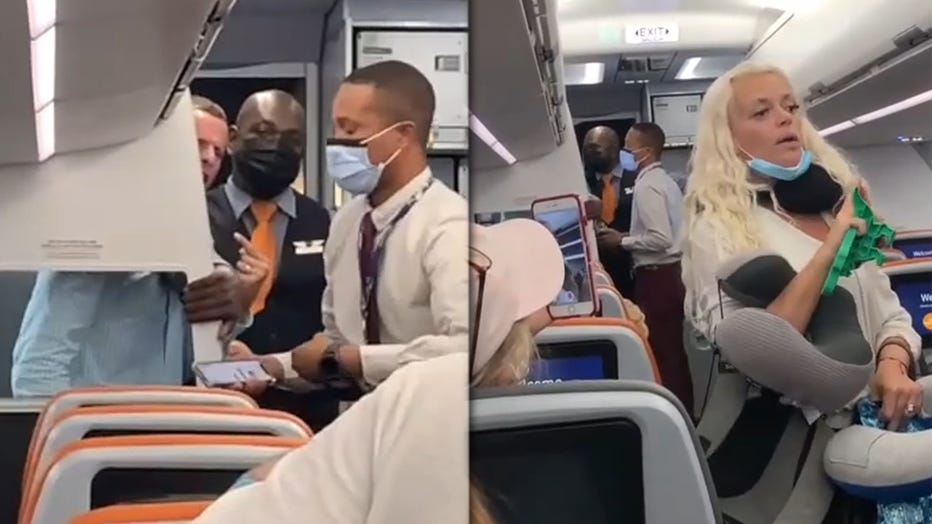 The passengers are pictured in screengrabs from a video recorded on Sept. 8, 2021, on a JetBlue flight prior to takeoff in Fort Lauderdale, Florida. (Credit: Alice Runkevich via Storyful)

JetBlue added that crewmembers are specifically trained to deal with travelers who do not follow airline policies.

"If a customer refuses to wear a face mask after being asked, crewmembers will work to de-escalate the situation to the best of their ability to gain compliance prior to removal. The safety of each customer and crewmember is our first priority, and we must work together to follow the federal mask mandate during the travel journey," the statement said.

U.S. federal law requires passengers wear a face mask amid the ongoing spread of COVID-19, regardless of vaccination status. Masks must be worn at airports, on commercial aircraft, and in various modes of other transportation, including passenger railroads, intercity bus services. The face mask requirements remain in effect until at least Jan. 8, 2022.

Several incidents of unruly passengers not following mask requirements have been reported this year since being implemented by the Transportation Security Administration in February.

The TSA announced last week it will double fines for individuals who violate the federal mask mandate on public modes of transportation. The new range of penalties is $500-$1000 for first offenders and $1000-$3000 for second offenders.

"We appreciate the majority of travelers each day who voluntarily follow the requirement, but find this action necessary to maximize the protections for those who use and work within the transportation system, and to contain COVID-19," said TSA Administrator David Pekoske. "By doubling the range of penalties, we seek to reinforce the importance of voluntary adherence."

The federal mask mandate-related civil penalties are separate from the civil penalties issued by the Federal Aviation Administration for individuals who engage in unruly and unsafe behavior.

Between Jan and August, the FAA said it has received 3,988 reports of unruly passengers. More than 2,900 of those calls pertained to passengers who refused to wear a mask. Six hundred and ninety-three calls prompted an investigation and 132 cases resulted in penalties.

Alcohol is another common factor regarding unruly passengers. American Airlines extended its ban on alcohol sales in the main cabin through January 2022, matching the timing of the federal mask mandate.