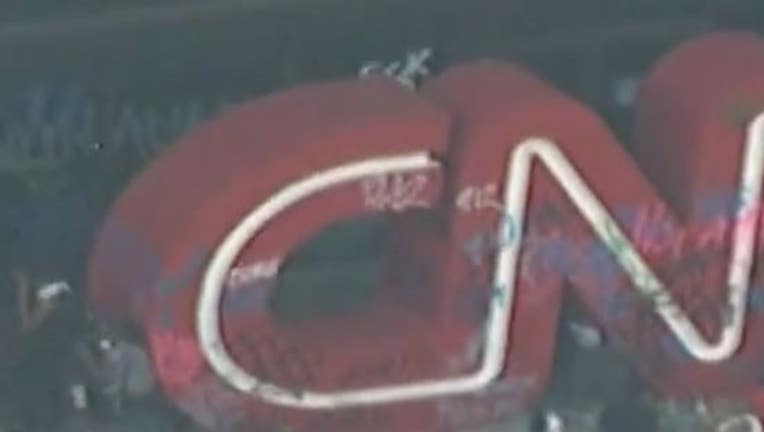 ATLANTA - The exterior of the CNN Center in Downtown Atlanta was heavily vandalized during demonstrations Friday evening over the death of George Floyd, a Minneapolis man who died while in police custody.

SKYFOX5 flew over the CNN Center, located at 190 Marietta Street NW, where protesters could be seen climbing on top of the giant CNN letters outside the building. Graffiti littered the sides of the building. At one point one of glass doors to the front of the building was shattered by a demonstrator. Bottles were being thrown at police working to maintain order and prevent further damage. 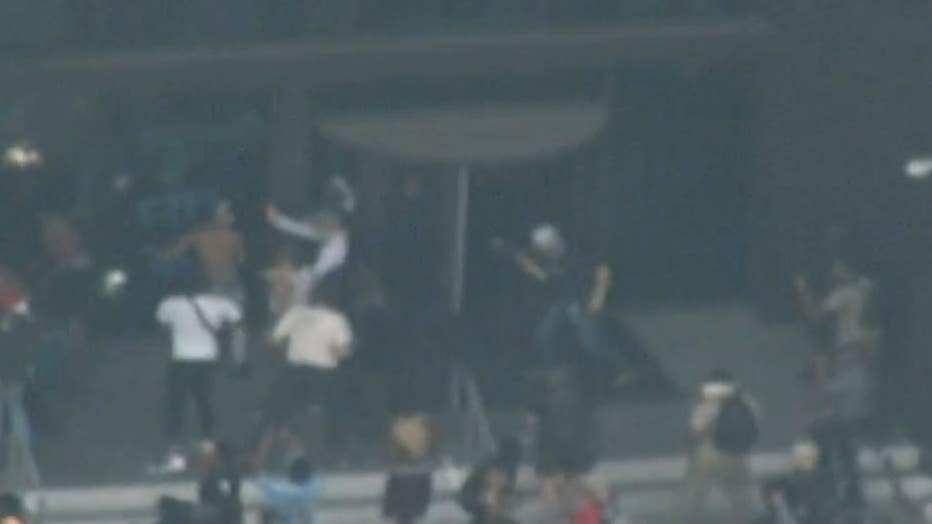 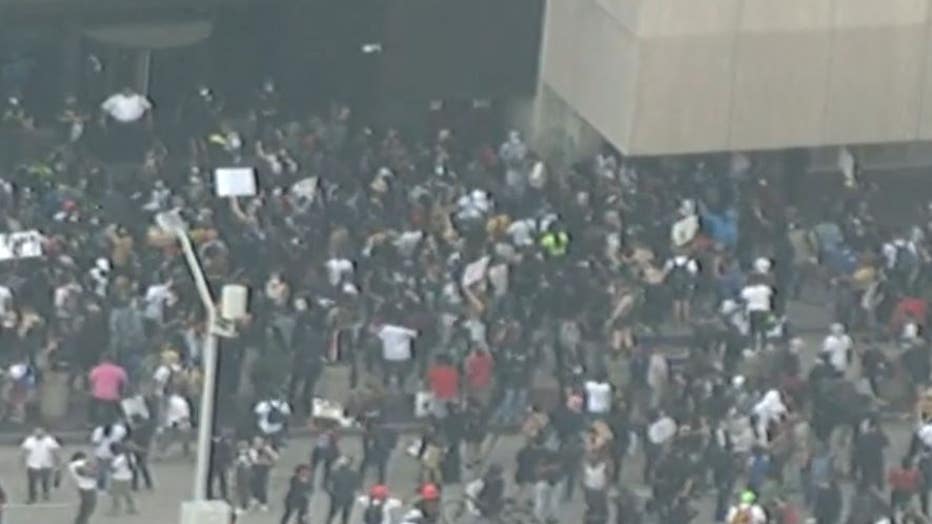 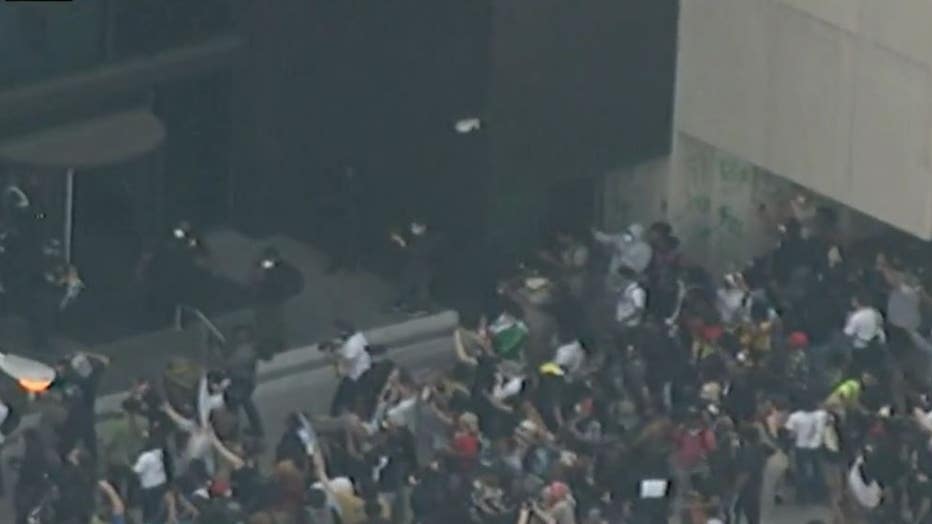 Protests started around 3 p.m. when hundreds of people gathered around Centennial Olympic Park, located at Park Avenue W NW and marched to the Georgia State Capitol. Demonstrators then made their way to the CNN Center where there were a few brief confrontations with police. 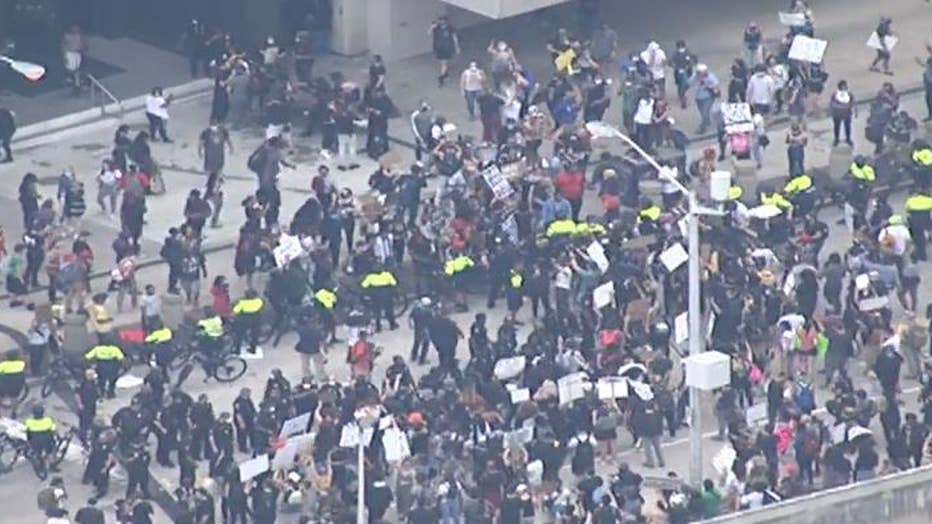 Demonstrators gather outside the CNN Center in Downtown Atlanta Friday, May 29, 2020 to protest the death of George Floyd, who was killed by a police officer in Minneapolis.

At one point, a group of demonstrators surrounded an Atlanta police officer inside his patrol vehicle. Additional officers arrived and began to push protestors back away from the vehicle, which led to a number of scuffles between police and protestors and at least three arrests, according to Atlanta Police.

One officer was pushed to the ground and sustained minor injuries. APD said pepper spray was utilized several times during the confrontation.

Police said they were attempting to allow the protestors to continue with a peaceful demonstration.

"Officers have been subjected to water bottles, eggs and other items being thrown at them. However we remain hopeful this activity will cease and there will be no need for further arrests or clashes with protestors," APD said in a statement to FOX 5. 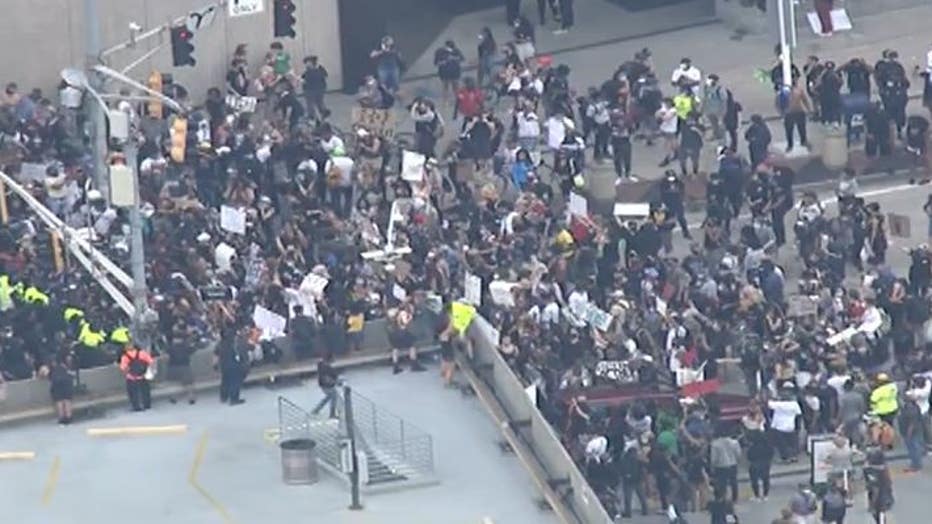 The incident involving Floyd sparked oputrage across wth country after video showed a Minneapolis police officer pressing his knee on Floyd's neck while Floyd said he couldn't breathe. Floyd was pronounced dead at a hospital after being detained by police.

Hennepin County Attorney Mike Freeman announced charges Friday against Derek Chauvin, one of the officers involved in Floyd's death. He has been charged with third-degree murder and manslaughter. 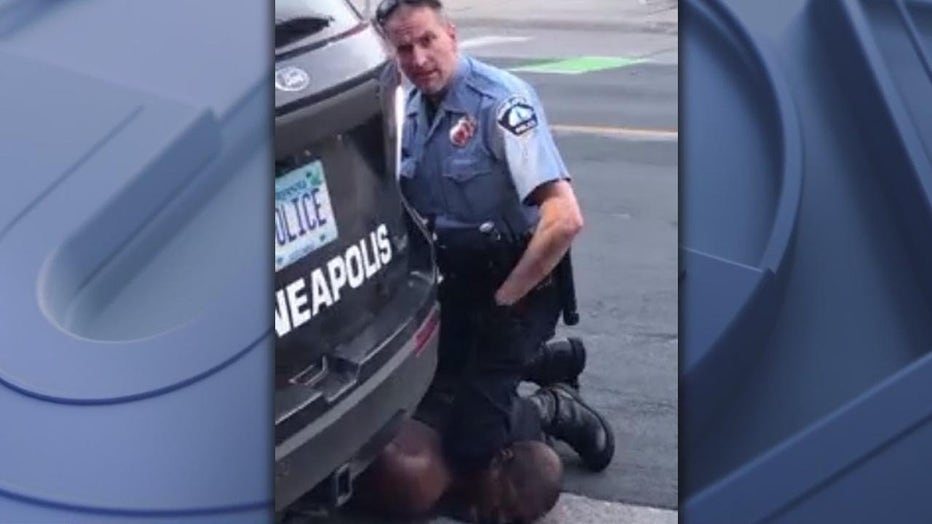 Chauvin and three other police officers were fired following the incident. The BCA and FBI are investigating.

Atlanta Mayor Keisha Lance Bottoms released a statement, calling on peaceful protest and for those who gather to embody the city's legacy.

"When lives and the conscience of this nation are at peril, we as a people are expected to exercise our Constitutional rights to peacefully assemble and have our voices heard. Atlanta embodies these values, and I encourage all who exercise these rights to remember Atlanta's legacy of peaceful protest leading to progress," the statement read.

Several other law enforcement organizations across the country have released statements condeming the Minneapolis officer's actions.