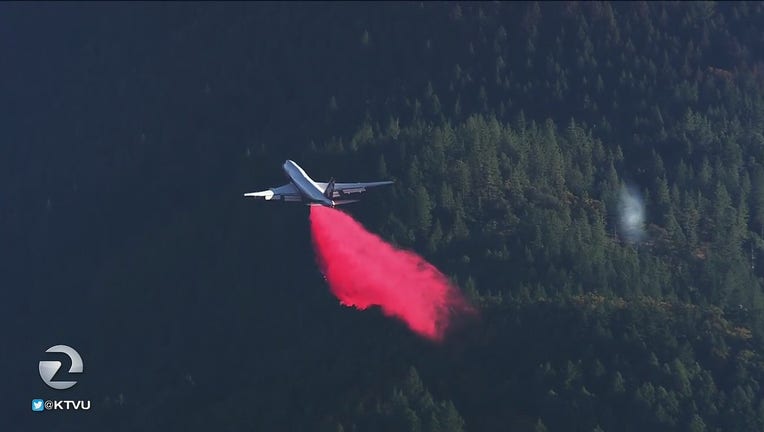 Cal Fire fighting the Kincade Fire from above.

SANTA ROSA, Calif. - The overnight winds were not as bad as predicted and by Wednesday evening Cal Fire crews contained 45% of the Kincade Fire, which began burning a week ago in Geyserville and has now spread to three Northern California counties.

Foxworthy said crews on Wednesday will put a special focus on the eastern front of the fire near Lake County.

"It's hottest there," he said, adding that the heaviest materials are also burning in that area.

Calmer winds, which still reached 67 mph in the high parts of Sonoma County, helped fire crews get a handle on the fire. Last weekend, winds hit 90 to 100 mph in some fire areas.

"Red Flag" warnings for the area expired late Wednesday afternoon. Cal Fire officials said 5,788 residents remain under mandatory evacuation orders. They are primarily in and near burn zones. As many as 6,400 people remain under evacuation warning.

Foxworthy said property and lives were saved because the majority of residents followed evacuation warnings.

"We could focus because civilians weren't in the way,"  he said. "The fact that they weren't there this time, made it easier."

Officials from Cal Fire, Sonoma County, and the National Weather Service joined Wednesday evening at the Kincade Fire command post in Santa Rosa to provide an incident update on the Kincade Fire.