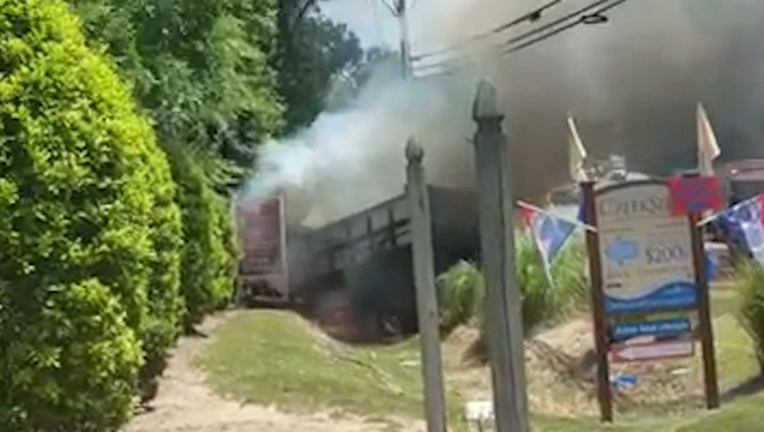 PITTSBURGH (AP) - A Massachusetts man who died saving a waitress from being stabbed by a mentally ill man and a 12-year-old Pennsylvania boy who died trying to save his father from a house fire are among 20 people being honored with Carnegie medals for heroism.

The Carnegie Hero Fund Commission, based in Pittsburgh, announced the winners Wednesday.

George A. Heath, 56, was dining at a Bertucci's restaurant in his hometown of Taunton, Massachusetts, when Arthur DaRosa, who had fatally stabbed an 80-year-old woman at her home earlier that night, walked in and stabbed a waitress. Heath grabbed DaRosa and was stabbed in the head before another restaurant patron, off-duty Plymouth County Deputy Sheriff James Creed, fatally shot DaRosa.

"George selflessly intervened within seconds, without even knowing what was going on," Creed said after the incident on May 10, 2016. "Without George, things would have been very much worse."

Sanford Harling III had escaped a fire at his family's duplex in Norristown, Pennsylvania, on Feb. 6, 2016, when he went back inside to try to save his father. Sanford Harling Jr., 58, was able to drop to the ground from a second-floor window, and his son was later found dead from burns and smoke inhalation.

The Carnegie Hero Fund Commission is named for the late steel magnate and philanthropist Andrew Carnegie, who was inspired by stories of heroism during a coal mine disaster that killed 181 people, including a miner and an engineer, who died trying to rescue others.

The commission investigates stories of heroism and awards medals and cash several times a year. It has given away $38.9 million to 9,934 awardees or their families since 1904.

Other winners announced Wednesday, with rescues taking place in the hometown of each winner unless otherwise noted:

-Krystal Ashley Salazar, 26, of Burleson, Texas, saved a 76-year-old woman from drowning after her car was caught in a flash flood in November 2015.

-Robert Hart Morgan, 18, and Connor William Quick, 18, both of Loveland, Colorado, responded when a woman crashed her car into a lake in freezing temperatures in November 2015. Morgan rescued the driver while Quick searched the vehicle in case there were other victims, but found none.

-Jeromy E. Richardson, 35, of Whitwell, Tennessee, died trying to save a 23-year-old man from drowning after he was swept over a dam and drowned while fishing in July 2015.

-Shane S. Mitchell, 32, and Lisa Missana, 47, of Tampa, Florida, saved a 26-year-old woman from drowning after her car crashed into a retention pond in March 2016.

-Jason Barnes, 36, of Westminster, Maryland, helped save a woman whose car was swept away during a flash flood in Ellicott City, Maryland, in July 2016.

-Steven L. Spurling, 50, of St. Charles, Illinois, rescued a woman who was being assaulted by an armed man and subdued him in May 2016.

-Timothy Carpenter, 48, of Cincinnati, Ohio, attempted to rescue a woman in a wheelchair who was being stabbed. Carpenter subdued the attacker and was wounded, but the victim died in the January 2015 attack.

-Erik Breitweiser, 35, of Manorville, New York, saved a man from burning after his car overturned and caught fire in Southampton, New York, in November 2015.

-Justin Sweet, 23, of San Diego, California, helped save a man from drowning in the surf at Coos Bay, Oregon, in September 2014.

-Richard David Greeno, 40, of Williamsport, Ohio, and Lisa McNairy, 50, of Circleville, Ohio, rescued a man from a burning home in Circleville in October 2015.

-Humberto Sanchez III, 23, of Stockton, California, saved a 4-month-old boy from burning in a vehicle that had been hit by another in August 2015.

-Madison L. Williams, 13, of Dublin, Ohio, saved a 2-year-old boy from drowning after he fell through a septic tank hatch in August 2016.

-Raul Moreno, 44, of Conyers, Georgia, saved a man from burning after his dump truck crashed into a ditch in June 2016.