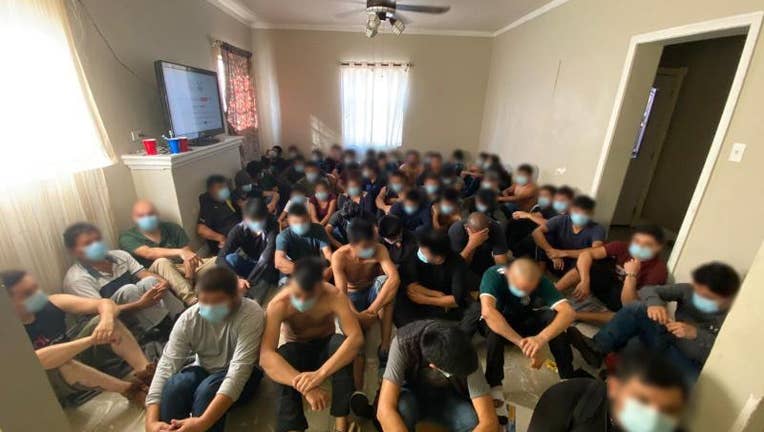 TEXAS - Agents with U.S. Border Patrol in Texas arrested nearly 300 undocumented immigrants in eighteen hours after a series of operations with other law enforcement agencies, officials announced in a news release.

Beginning on the afternoon of October 13, agents from the Laredo South Station found 123 illegal immigrants from the countries of Mexico Guatemala, El Salvador, and Honduras stashed inside of a home. All were taken into custody.

Just a few hours later, agents received information on another possible stash house, and upon a search arrested 13 people who were in the U.S. illegally from Mexico. Numerous U.S. citizens who were also in the home were also taken into custody for being involved with human smuggling.

Later that evening, a Border Patrol dog alerted agents to a truck at a checkpoint, prompting them to search the vehicle. Agents found 84 people from Mexico, Guatemala, El Salvador, and Honduras in the trailer, all in the U.S. without permission. All were taken into custody.

Finally, on the morning of October 14, a Border Patrol dog at another checkpoint alerted agents to another truck, prompting them to search the vehicle. Agents found 74 people inside of a refrigerated trailer from Mexico, El Salvador, Honduras, Guatemala, and Peru, all in the U.S. without permission. The entire group was taken into custody.

The four separate incidents saw a grand total of 294 illegal aliens arrested for trying to sneak into the U.S. Ninety of the people taken into custody were from nations other than Mexico.

“In all of the incidents, none of the individuals were wearing any personal protective equipment,” the CBP said in a statement. “These callous and dangerous acts are several examples of the lack of regard human smugglers have for those they exploit for profit.”

Border Patrol agents in the Laredo sector have stopped several cases of human smuggling in October, including finding a truck with 117 migrants stuffed inside the trailer.