Investigation ramps up after discovery of abducted infant

Police still do not who stole the SUV that 1-year-old Blaise Barnett was in early Wednesday morning or how he ended up in another SUV in front of a Clarkston home on Thursday afternoon. Little Blaise was reunited with his family as investigators try to build a timeline of where he has been for more than 37 hours.

CLARKSTON, Ga. - More than 37 hours after being abducted from in front of his Clarkston apartment, a missing 1-year-old boy has been reunited with his family. The incident prompted a Georgia Amber Alert early Wednesday morning.

"It's a great day in Clarkston because we were able to find Blaise Barnett and we are happy for all the prayers, all the support from the GBI," said Clarkston Mayor Beverly Burks.

Blaise Barnett was found safe Thursday afternoon at a home on Rogers Street, according to investigators 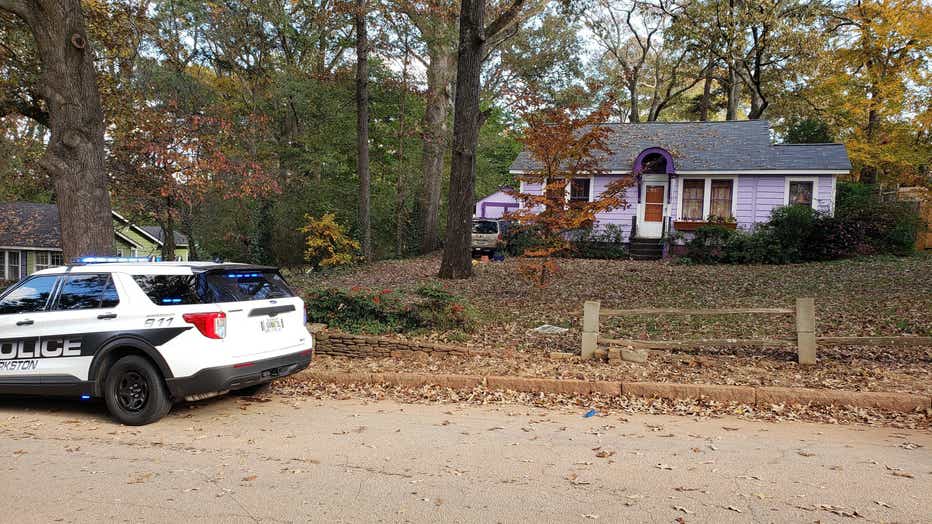 "The baby was found in a car in the driveway. She left her home and found the baby in the car," Sgt. Dustin Belcher, Clarkston Police Department.

Sgt. Belcher said the woman immediately brought the infant into her home and called 911.

After a cursory medical evaluation, little Blaise Barnett was brought back to the Clarkston police headquarters where he was reunited with his family.

Little Blaise is said to be in good condition but was taken to the hospital shortly after the reunion for further evaluation. EMTs brought the young child out on a stretcher, his face was covered, shielding him from the crowd. Cheers and shouts of "prayer works!' as he was brought out of police headquarters.

"He still looks the same, he's safe now, he's home," the boy's mother Deonna Bray told reporters moments after Blaise was loaded into the ambulance. "That's all I wanted that he's home now. Thank you."

Little Blaise could be heard crying inside that ambulance as his mother spoke.

This raw video shows authorities towing away the SUV from in front of a Clarkston home in which 1-year-old Blaise Barnett was found alive after a more than 37 hours search on Thursday afternoon.

FOX 5 was there as the SUV in which little Blaise was found was towed away to be combed over for evidence.

Sgt. Belcher said they will be questioning the woman who found the child and likely will be canvassing the neighborhood for clues.

FOX 5's Brian Hill caught up with the homeowner who found the infant in the SUV in her driveway as she walked back into her home.

The woman who found an abducted infant in an SUV in front of her Clarkston home after being missing for 37 hours said she is glad the child is safe.

"It was right there in my car," the woman showed where the now towed SUV once was parked.

Hill: "And what was his condition?"

Homeowner: 'Good. He was in good shape."

The woman said she did not hear anything outside of her home prior to finding the infant.

It has been an agonizing day and a half for the family. The 1-year-old boy had been taken while sleeping in his family SUV at his apartment complex on 1000 Montreal Road early Wednesday morning. Family members were putting away groceries just after 1 a.m. and were only gone for a moment when someone made off with the 2002 Ford Explorer, police said.

Video of SUV driving away during infant abduction

This video shows the SUV stolen from a Clarkston apartment during the early morning hours of Nov. 10, 2021. The surveillance video was provided to FOX 5 by a store across the street from the complex. Police said 1-year-old Blaise Barnet, who was inside that SUV at the time, was found safe more than 37 hours later.

A new video obtained by FOX 5 shows the moments immediately following the SUV being stolen from that apartment complex. The surveillance video from a store across the street shows the SUV casually making a left turn out of the complex and away from the scene.

That SUV would be found around 10 a.m. about two miles away from the family's apartment. There was no sign of the child or his car seat.

Blaise Barnett was found in a van outside of a home in Clarkston around 39 hours after the baby was reported missing.

James Dent told FOX 5 he was the one who called police to report he had found the vehicle at the Dennon Hills Condominiums in DeKalb County. He said a man who was in the area ran when he approached.

At a vigil Wednesday night, family members gathered at the apartment complex where Barnett had been last seen to beg his abductor to return him safely.

The young boy who spark a statewide Amber alert remains missing. His Clarkston family held a vigil with members of the community to pray for his safety and plead for his safe return.

"Bring him home. He is no harm. He is the sweetest boy in the world and if he is crying it's because he is not with me. He is going to keep crying 'til he gets with me," the Deonna Bray said.

The FBI was also assisting in the investigation, officials confirmed.