It is video that some may find hard to watch. An Atlanta police officer was documenting a traffic accident while on the shoulder of I-75 near 17th Street when a car struck him. Officer Steven Randerson, a nine-year veteran of APD, was seriously injured. Police said a driver was going too fast and too close to the shoulder in wet conditions. APD release body cam video worn by Officer Randerson to remind motorists of Georgia's Move Over Law.

ATLANTA - It is body camera video that the Atlanta Police Department wants all motorists to see. An officer documenting a crash on the shoulder of Interstate 75 is struck by a car. APD said the video underscores the need for drivers to abide by Georgia's Move Over Law.

Some police clichés are true. There is no such thing as a routine traffic stop and "officers put their lives on the line every single day to protect and serve their community." The Atlanta Police Department says most people don’t really understand how true these statements are.

Officer Steven Randerson, a nine-year veteran of the Atlanta Police Department, knows. He is still on leave almost two weeks after being struck by a car. It was his body camera video police released.

APD OFFICER HOSPITALIZED AFTER STRUCK BY CAR ON I-75 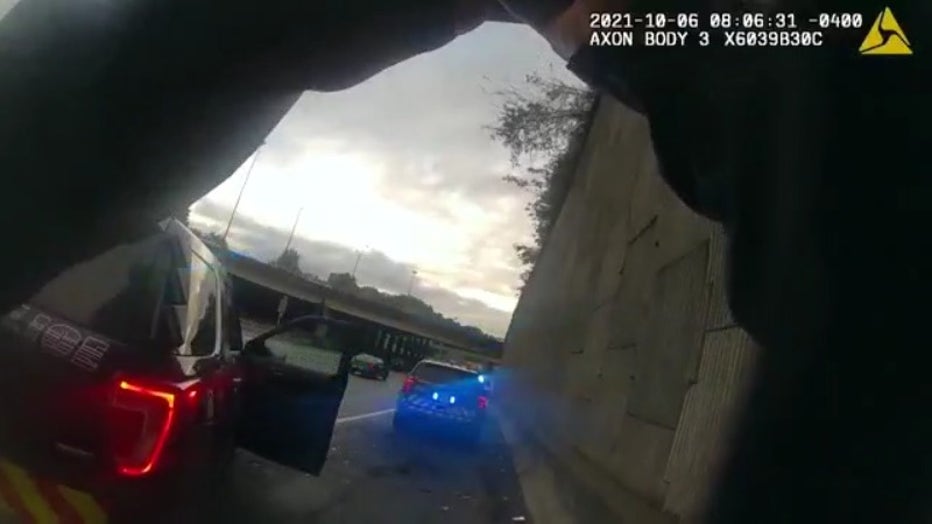 Officer Steven Randerson documents the scene of a crash on the shoulder of I-75 north of 17th Street NW just moments before being hit by a car on Oct. 6, 2021. (Atlanta Police Department)

It was the morning of Oct. 6, just after the morning rush. The video shows Officer Randerson taking pictures documenting a crash scene that was moved to the right-hand shoulder of the busy interstate just north of 17th Street NW.

Two police cruisers can be seen behind the civilian vehicles, their lights flashing. Officer Randerson, who has moved beside his cruiser on the shoulder of the road, points his cellphone back toward the northbound lanes to take a photo of where the crash happened on the interstate. He then turns north to where the cars from the wreck ended up.

As he is about to take a photo, Officer Randerson is hit by a car. The video shows chaos for the next five seconds in quick flashes. The camera focusing on his cruiser, now turned 90 degrees, cut quickly to a view of the shoulder of the road now coated with debris, then Officer Randerson’s badge, then his face, and ending up out of focus pointed towards the pavement.

Yelling can be heard as his fellow first responders run over to assist him.

"Officer down, officer down, please send units right now, right now!" his fellow officer at the scene can be heard telling dispatch. 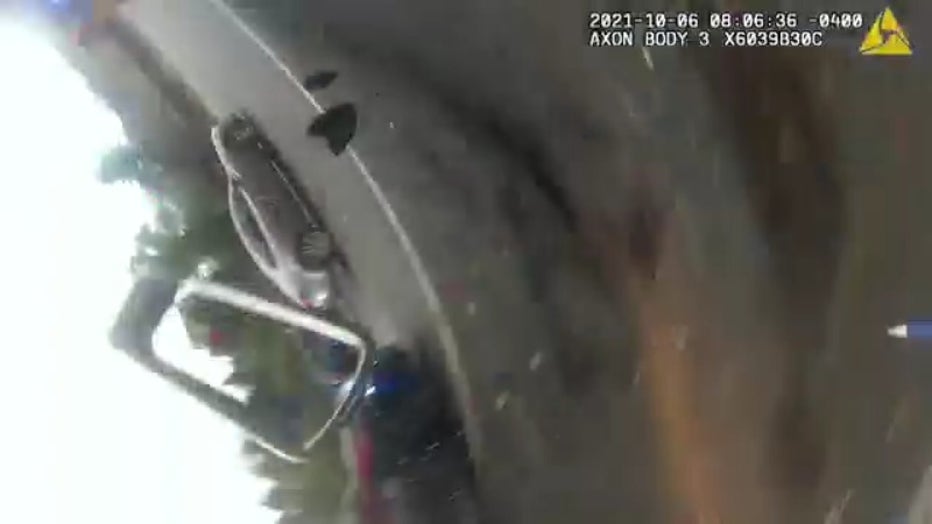 "The oncoming vehicle was traveling too fast for the wet conditions and lost control as it approached the area of the accident," the Atlanta Police Department wrote on their Facebook page about the incident. "The driver who rammed into Randerson was cited for going too fast for conditions."

For how bad the video looks, police said it could have been so much worse.

"We are grateful that Officer Randerson is in the healing process. This could have ended so much worse. This incident is a reminder of the many dangerous situation’s officers can and do encounter each day and how grateful we should all be for their service," Atlanta police wrote. "We are proud of the work our officers do and are mindful of their bravery."

Georgia’s Move Over Law has been in place for more than 18 years.

"We remind motorists of Georgia’s Move Over Law which was put in place to avoid exactly this type of thing from happening. This law states that drivers must move over one lane when emergency vehicles are stopped on the side of the road," APD wrote.

An Atlanta police officers was struck by a car while on the shoulder of Interstate 75 investigating a crash earlier this month.

"We also remind you to slow down during inclement conditions and to always pay attention to the road. When you speed, drive impaired, fail to consider weather, or are otherwise inattentive on the roadway, you put everyone at risk, including officers who are out working to keep the community safe," the post continued.

According to the Officer Down Memorial Page, 50 officers have been killed in traffic crashes, which is up 25 percent from 2020.

"Your focus and consideration while driving can save lives or destroy them. Protect our officers and protect your fellow citizens by making safety your priority," APD’s post concludes.

To learn more about Georgia’s Move Over Law, click here.