Bodycam video in dispute in 2018 case

ATLANTA - A local man has filed a lawsuit against the Atlanta Police Department and an officer after a December 2018 shooting outside of a McDonald's in Atlanta.

The man, Saleem Wilson, claims he was shot in the back of the neck by an officer.

Pierre Ifill, Wilson's attorney, provided FOX 5 with body camera footage from two officers who responded to the incident on December 22, 2018.

In the video, you can see Officer Virigina Pena Barrientos was speaking to Wilson.

Officer Ian Mayfield is speaking with another man. Officers were speaking to both men inside the McDonald's about suspected marijuana use.

Ifill said officer Mayfield took a gun from the man he was talking to. Officer Barrientos found a gun in Wilson's bag.

Then, you can see Wilson take off running out of the door of McDonald's. Officers Mayfield and Barrientos are behind him.

You can then hear a Taser and a gunshot. 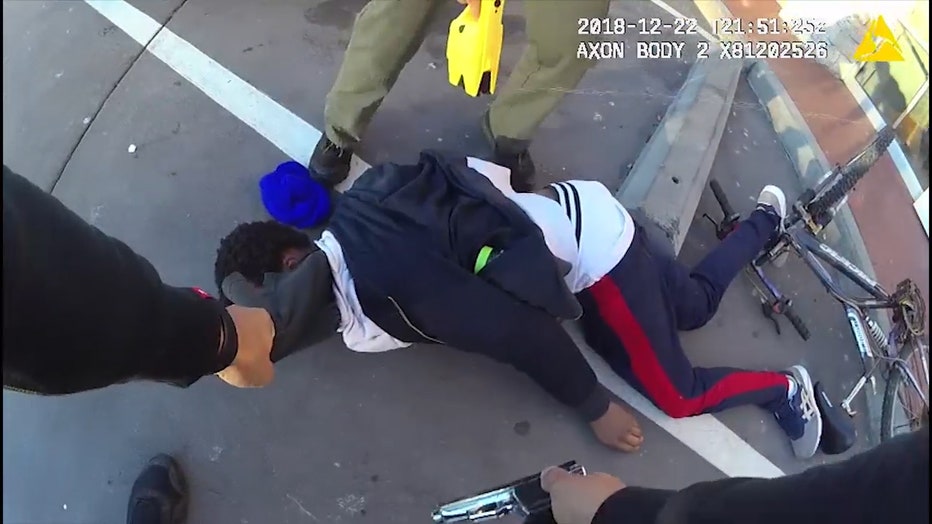 Bodycam video from the arrest of Saleem Wilson by an Atlanta police officer on December 22, 2018. Wilson ened up suffering a gunshot wound during the arrest. (Atlanta Police Department)

Ifil said that gunshot was the sound of Wilson getting shot in the back of the neck.

"When he ran out the door, Ian Mayfield gave chase and as soon as my client exited the McDonald's, officer Ian Mayfield grabbed his hoodie and shot him in the back of the neck with the gun he took off the third party," Ifill said.

Ifil said the video then shows the officer place the gun on the ground while holding on to Wilson's hood.

Several minutes later, Officer Mayfield is heard talking to another officer about what happened.

"I grabbed him with one hand....and then I took this hand and the gun went off. I don't know exactly where he was hit."

The lawsuit names the Atlanta Police Department and Officer Mayfield.

Ifill said initial reports from police stated Wilson shot himself with his own gun.

As of now, Ifill said he hasn't been provided any updates on whether or not Mayfield will face any charges.

"We don't want this swept under the rug. We want justice for Saleem Wilson," Ifill said.

A man being arrested i December 2018 by Atlanta police ended up with a gunshot wound. Now, his lawyer has filed a lawsuit against the city and the department.

The GBI was called in to investigate. A spokesperson told FOX 5 it couldn't comment because the GBI's findings were turned over the DA's office.

The Fulton County District Attorney's Office said their investigation into the case will be completed on September 7 of this year.

FOX 5 reached out to the Atlanta Police Department for comment on this incident but did not hear back.

Ifill said the drug charge against Wilson was dropped but the gun possession charge has not been dropped.

He said Wilson was able to have the bullet removed from his neck but is traumatized from the incident.