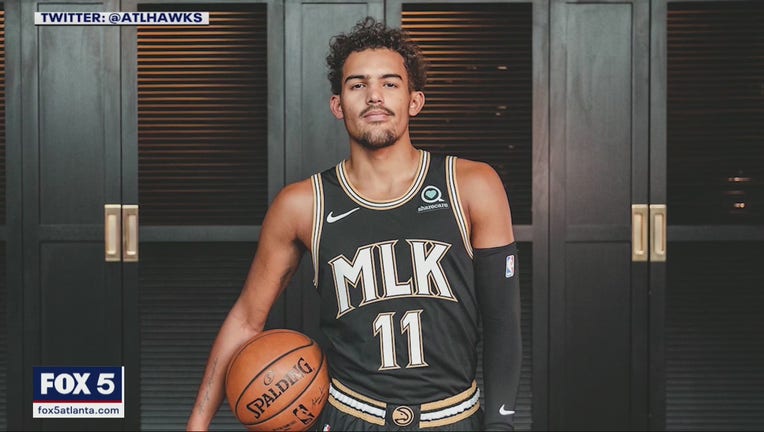 ATLANTA - The Atlanta Hawks paid special tribute to Martin Luther King Jr. at their home game on Monday. The team wore jerseys with MLK written on the front. The Hawks home court also featured the Hawks logo in a mosaic pattern.

Monday's game marks the 26th home game the Atlanta Hawks have played on Martin Luther King Jr. Day. The team said it was extra special to be able to honor him in his home city.

"Being able to come out here and wear those three letters at the front of our chests, represent and get the win is big," said De'Andre Hunter, Hawks guard.

The legacy of Dr. Martin Luther King Jr. was displayed proudly at the Atlanta Hawks game on Monday.

"I think it's a great day of reflection. I think it's an opportunity for our guys to reflect on why they're wearing the jersey," said Lloyd Pierce, Hawks Head Coach.

How the Rev. Dr. Martin Luther King, Jr. Day was marked across America.

Hawks head coach Lloyd Pierce has been an advocate for social and racial justice. Pierce said he wants the conversation to continue after MLK Day.

"I think when you get to reflect and you get to think back and have these conversations what you get is a reminder of how far we still have to go and what we can do about it," said Pierce.

The MLK inspired jerseys have been in the works for a few years. The team also had the support of the King Center who reviewed the designs once they were made. The jersey's colors commemorate Dr. King’s fraternity Alpha Phi Alpha.

The Hawks' involvement in social equality has also caught the attention of the Vatican. Pope Francis received his own MLK jersey. The Hawks posted the video of the Pope blessing and signing the jersey.

"It means a lot to play on MLK Day just knowing the history behind what he stood for," said Trae Young, Hawks point guard.

The Hawks home court also featured MLK's initials and a Hawks logo in a mosaic pattern. The court was also lined with 22 stars signifying the times King was jailed for fighting for racial equality.

The MLK jerseys are available for sale at the Hawks shop. All the money raised from the jersey will go back into the Atlanta community.