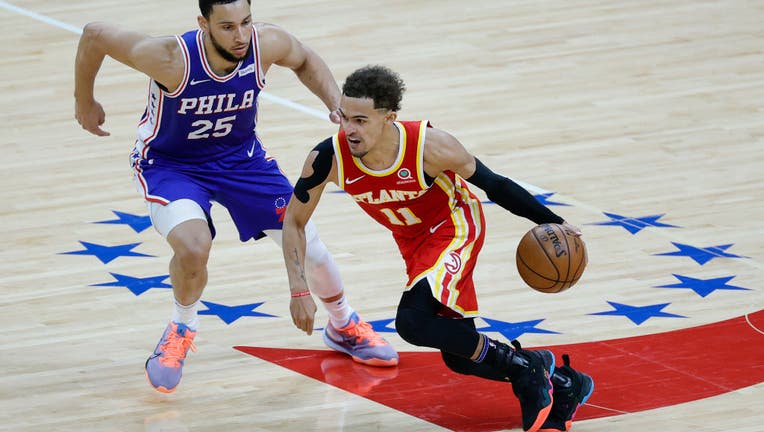 Trae Young of the Atlanta Hawks dribbles past Ben Simmons of the Philadelphia 76ers during the fourth quarter during Game Five of the Eastern Conference Semifinals. (Photo by Tim Nwachukwu/Getty Images)

PHILADELPHIA - Trae Young and the Atlanta Hawks pulled off a playoff comeback for the ages against the Philadelphia 76ers to move within a victory of the Eastern Conference Finals.

Young was fouled on a 3-pointer and hit all three free throws with 1:26 left to cap a 26-point comeback and send Atlanta on its way to a 109-106 victory over the 76ers on Wednesday night in Game 5.

The Hawks won in Philadelphia for the second time in the series and can advance to the conference final for the first time since 2015 with a victory Friday night in Atlanta.

Young scored 39 points and added to a postseason where he has become a breakout star.

Joel Embiid scored 17 points in the first quarter and had the Sixers on their way toward a romp with a 26-point lead in the first half. They still led 87-69 at the end of the third before they collapsed.

Embiid finished with 39 points, and Seth Curry had 36.