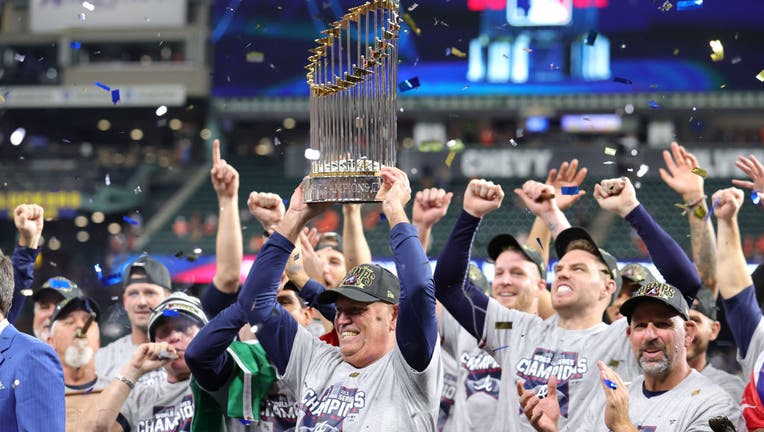 Manager Brian Snitker of the Atlanta Braves hoists the commissioner's trophy following the team's 7-0 victory against the Houston Astros in Game Six to win the 2021 World Series. (Photo by Carmen Mandato/Getty Images)

ATLANTA - Missed the chance to see the Braves' World Series Trophy in person? You'll have over 150 chances to see it again. The Atlanta Braves will be taking the team's trophy on tour with stops throughout Braves Country.

Tour stops will include the opportunity for fans to take photos with the trophy and other programming from the Braves.

The tour begins on Tuesday, Feb. 15 at Colony Square in Midtown. At this stop, fans can also enjoy music with the Atlanta Braves Heavy Hitters and Blooper.

"We felt the tremendous support of Braves Country throughout the season and particularly in the Postseason, and we are taking this Championship on the road to fans across the Southeast so that they can share in the joy and celebration of this historic victory," said Atlanta Braves President and CEO Derek Schiller.

The tour will stop in locations like Mobile, Alabama, the birthplace of Henry "Hank" Aaron, Cairo, Georgia, the birthplace of Jackie Robinson, DeKalb for the Morehouse College baseball season opener, and the stadiums of the Braves' minor league teams.

You can see the full schedule below: