GRANTVILLE, Ga. - Trevor Conkey spent a month in Piedmont Newnan Hospital, more than half of that time in a medically-induced coma, battling complications of a COVID-19 infection.

The Grantville, Georgia, father of 3 was one of the first Georgians to receive the experimental antiviral remdesivir back in March.

He believes it helped him turn a corner.

Conkey talked about his ordeal in a Zoom interview, wearing a t-shirt that reads, “Not today, Satan.”

His youngest daughter gave it to the 54-year-old before he got sick.

Still, Conkey really does feel like he's been through hell and back in the last three months. 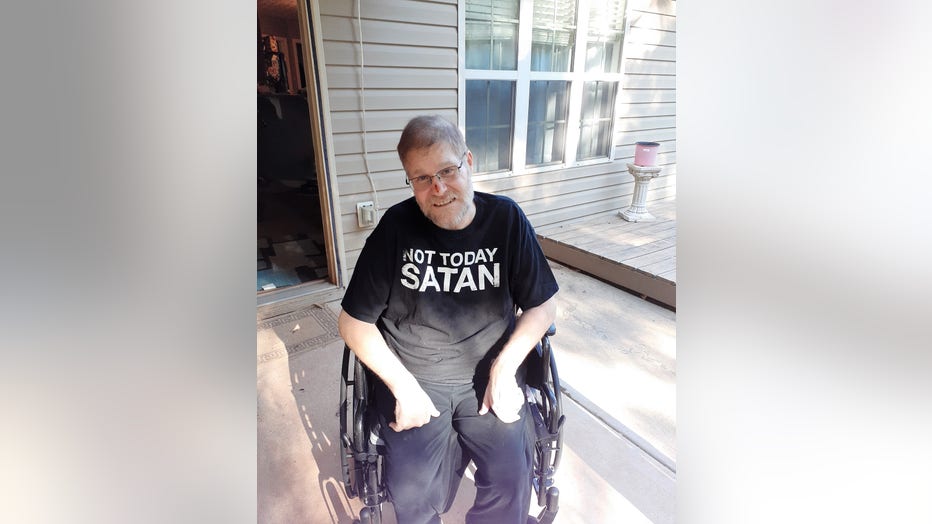 The Grantville, Georgia, 54-year-old was one of the first COVID-19 patients to receive the experimental antiviral remdesivir back in March of 2020 (Source: Trevor Conkey). (Trevor Conkey)

Back in early March, he was driving for Uber, taking passengers to and from the Atlanta airport, when Conkey suddenly developed a bad cough.

"The wife and I thought I was having a bad bronchitis attack,” he remembers.

They went to Piedmont Newnan, where Conkey was kept for a couple of days, swabbed for COVID-19, and then sent home to isolate and wait for his test results.

The next day, he says, he spiked a fever, and learned he had tested positive for the virus.

His wife was keeping an eye of Conkey.

Conkey ended up back at Piedmont Newnan, this time in the ICU, on a mechanical ventilator for 17 days.

After trying one drug that didn't work, doctors asked his wife if they could give him remdesivir, an experimental antiviral drug designed to slow down the virus' ability to reproduce itself in the body.

"The doctors basically told her this is about the last thing we have to try,” he says. "They gave it to me, and, lo and behold, I started getting better."

After a recent study found remdesivir can help ventilated patients recover more quickly, the U.S. Food and Drug Administration issued an emergency use authorization, clearing the way for hospitals to get better access to the drug.

Now, they just have to find it.

Earlier this week, the Georgia Department of Public Health received a shipment of 30 cases of the antiviral, but the agency is still working on a plan to get the drug to hospitals who need it.

"We actually have not heard how that is going to be distributed yet,” Dr. Amy Case says.

Dr. Case is a Piedmont Healthcare pulmonologist and critical care specialist, who is heading up her system’s COVID-19 response.

She says three of Piedmont Healthcare's eleven hospitals currently have access to the antiviral through the manufacturer Gilead Sciences' expanded access program.

But, Case says, they don't know if what they have now will be enough to get them through the months ahead.

"I think what we don't know now, is, what our needs are going to look like in the next weeks and months, as Georgia returns close to normalcy,” Dr. Case says. “There is concern about whether or not we'll see another wave of COVID-19 illnesses."

Two months after his COVID-19 battle, Trevor Conkey is still struggling with lingering effects of the virus, like fatigue and nerve pain.

He says he is grateful for his medical team and  his family who fought for him.

"I believe it was our faith that pulled us through,” Conkey says. “Even though we went through some very hard things, we still came out the other side. We're probably closer than we've ever been."