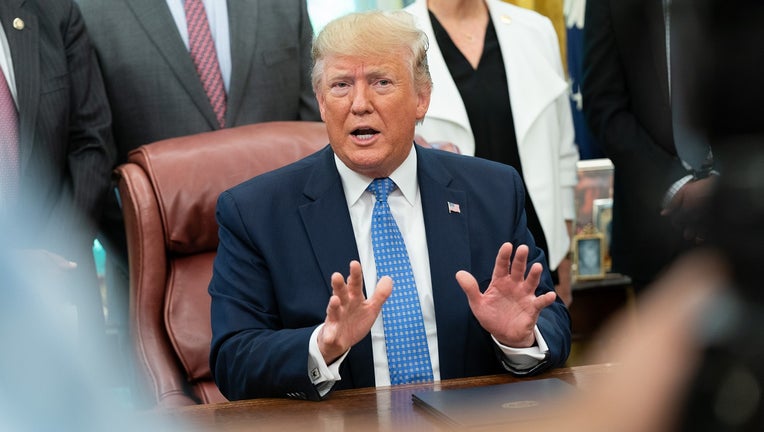 WASHINGTON - House Speaker Nancy Pelosi said Thursday that Democrats will draft articles of impeachment against President Donald Trump, a crucial step toward a vote of the full House.

The articles are likely to mostly encompass Democrats' findings on Trump's dealings with Ukraine. Democrats are still writing them, but the articles could charge Trump with abuse of office, bribery and obstruction.

Lawmakers and staff are expected to finish drafting the articles in the coming days, a process that is being led by Pelosi and the House Judiciary Committee. That panel could approve the articles as early as next week, setting up a vote of the full House in the days before Christmas.

A breakdown of what it means, how the process works and what the articles might say:

WHAT ARE ARTICLES OF IMPEACHMENT?

Articles of impeachment are charges against the president. If the House approves them, they are then sent to the Senate for a trial and eventual vote. There can be as few or as many articles as the House decides.

In a Senate trial, senators are jurors and select House members act as prosecutors, or impeachment managers. The chief justice of the Supreme Court presides. If the Senate approves an article of impeachment with a two-thirds vote of “guilty,” the president is convicted and removed from office. If all the articles are rejected, the president is acquitted.

While the process has the trappings of a criminal trial, the decision is purely political.

This is the fourth time in history Congress has moved to impeach a president. If he were convicted by the Senate, Trump would be the first to be removed. But that is unlikely in the GOP-controlled Senate.

White House says it will not participate in House impeachment proceedings

The White House said Friday that it will not participate in the House Judiciary Committee’s impeachment proceedings in a scathing, two-paragraph letter.

WHAT THE ARTICLES WILL COVER?

The articles of impeachment are likely to encompass two major themes - abuse of office and obstruction. But they could be divvied up into multiple articles.

An impeachment article accusing Trump of abuse of office, or abuse of power, would focus on the findings of the Ukraine investigation and his efforts to persuade the Ukrainian government to investigate Democrats as the U.S. withheld military aid. That conduct is the focus of a House Intelligence Committee report that will be presented to the Judiciary panel for consideration in a Monday hearing.

Some lawmakers have suggested that Democrats could break out “bribery” as a separate article. It would likely center on Trump withholding the aid, and also withholding a White House meeting with Ukrainian President Volodymyr Zelenskiy, in exchange for the political investigations.

The administration's repeated refusals to provide documents and testimony would serve as the basis for an article charging Trump with obstruction of Congress. If Democrats decide to draft an article on obstruction of justice, it could mention the findings of special counsel Robert Mueller's investigation.

There has been an internal debate in the House Democratic caucus about how many articles to write and how much to include - and whether to include matters beyond Ukraine at all.

Some moderate Democrats have argued that the articles should focus solely on Ukraine, as they believe it's a clearer case. Others say they can't ignore Mueller's report, which said that Trump couldn't be exonerated of obstructing the special counsel's investigation. He essentially left the matter up to Congress.

Virginia Rep. Gerry Connolly says it would be a “terrible mistake” to ignore obstruction of justice as laid out by Mueller. But he said Democrats “certainly don't want everything in the kitchen sink" in the articles, either.

“I think we should keep it as simple as possible," said California Rep. Eric Swalwell, a member of the Judiciary and Intelligence panels. “I think it's important that this is digestible for everyday Americans who are understandably busy, but understand what a shakedown is, too.”