The victim of a fatal Oakland freeway shooting on Tuesday was a 28-year-old recruit for the Alameda County Sheriff's Department. CHP is taking the lead in the investigation.

OAKLAND, Calif. - An Alameda County Sheriff's 28-year-old recruit was killed in a freeway shooting in Oakland on Tuesday afternoon by the Bay Bridge toll plaza, sending shock waves through the law enforcement department.

The California Highway Patrol are investigating the death that shut down parts of the interstate at the MacArthur Maze for some time.

The recruit, who was driving home towards San Francisco, was about to graduate in February, the department said.

Officers from the CHP Golden Gate Division said at around 4:30 p.m. they responded to a collision at the westbound I-580 transition to westbound I-80, one of the many approaches to the Bay Bridge Toll Plaza.

Officers saw that the male driver had been shot.

Their preliminary investigation determined after being shot, the recruit then veered into the guardrail, damaging his vehicle.

The young recruit, who has not been named, was transported to a local hospital where he later died from his injuries, according to CHP. His colleagues said he had been driving home from the training facility in Dublin.

The Alameda County Sheriff's Department tweeted they were saddened that the "young ACSO employee" was shot while driving home from work.

Not many details are available. No arrests have been made. There is no suspect information or motive. It's unclear if the recruit was targeted or shot in crossfire.

The CHP remained at the scene to collect evidence before reopening all lanes just before 8 p.m.

Speaking to KTVU late in the evening, Sgt. J.D. Nelson elaborated that the recruit had just left class and was headed home towards San Francisco.

"You see these stories all the time, sadly," Nelson said. "As a guy whose grown up here, it’s hard for me to believe all these acts of violence happen, repeatedly, over and over and over again. And today it hit home. And it’s just awful. Awful."

He described the incident as an awful day for the department, calling the killing a "senseless murder." Nelson said the recruit was in his civilian clothing and in his own unmarked car when he was shot.

In November, the CHP said there had been nearly 80 freeway shootings in the last 12 months in Alameda County, most of them concentrated along the East Bay stretches of I-880 and 580.  One of those shootings involved the death of a 2-year-old driving home to Fremont. Another was a young mother on her way to a job interview.

A video provided by the sheriff's office captured the moment Alameda County sheriff's deputies and CHP officers saluting a flag-draped casket of the recruit as it was loaded into the coroner's van at Oakland's Highland Hospital.

"Our Deputies have just loaded the body of our young police academy recruit for a law enforcement procession from Highland Hospital to our Coroner’s Bureau. We are heartbroken and disturbed by this senseless act of gun violence," sheriff’s officials said on Twitter.

Nelson said the young man's parents were distraught and that his sister and girlfriend were present at the hospital.

Anyone with information is asked to call the CHP investigation tip line at 707-917-4491.

Alameda County Sheriff's Department deputies and California Highway Patrol officers salute a slain sheriff's department recruit after he was shot and killed along an Oakland freeway on Tuesday. 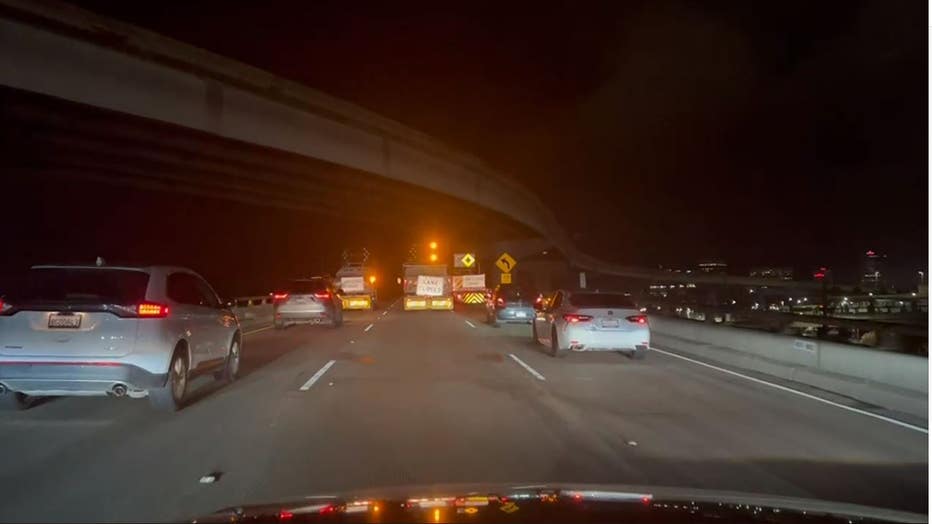 KTVU's Henry Lee and Amber Lee contributed to this story.