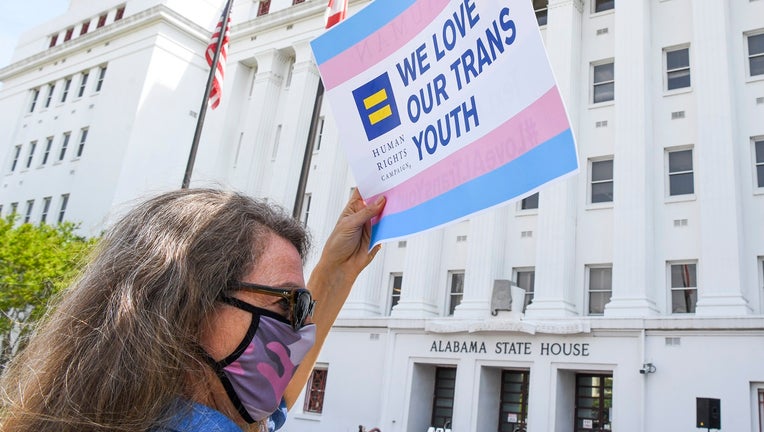 Jodi Womack holds a sign that reads "We Love Our Trans Youth" during a rally at the Alabama State House to draw attention to anti-transgender legislation introduced in Alabama on March 30, 2021 in Montgomery, Alabama. There are so far 192 anti-LGBTQ

MONTGOMERY, Ala. - It’s now a crime in Alabama to administer or prescribe gender-affirming puberty blockers and hormones to transgender people under age 19, as a new law took effect Sunday without intervention from the courts.

Alabama is the first state to enact such a ban on these treatments for transgender youth. A similar measure in Arkansas to halt the treatments was blocked by a federal judge before it took effect. A federal judge has not yet ruled on a preliminary injunction request to block Alabama from enforcing the law while a court challenge goes forward.

"Families are scared. How can you not feel like the floor was pulled out from under you?" Dr. Morissa Ladinsky, a pediatrician who founded a Birmingham medical team that treats children with gender dysphoria, said Sunday. Ladinsky said she remains hopeful that a federal judge will grant an injunction request.

The Vulnerable Child Compassion and Protection Act makes it a felony, punishable by up to 10 years in prison, to prescribe or administer gender-affirming medication to young people under 19 to help affirm their new gender identity. It also requires school counselors, teachers and other school officials to tell parents if a minor discloses that they think they are transgender.

U.S. District Judge Liles Burke had cautioned attorneys on Friday that he might not have a decision on a request for a preliminary injunction by the Alabama law’s May 8 effective date. Burke said he and his staff would do "nothing else" but work on the issue.

Four families with transgender children and others filed a lawsuit that the U.S. Department of Justice joined challenging the law as discriminatory, an unconstitutional violation of equal protection and free speech rights and an intrusion into family medical decisions.

The plaintiffs asked Burke to issue an order blocking enforcement of the statute while the lawsuit goes forward. Twenty-three medical and mental health organizations, including the American Academy of Pediatrics, have also urged the judge to enjoin the law.

Attorneys for Alabama argued the ban should be allowed to go forward.