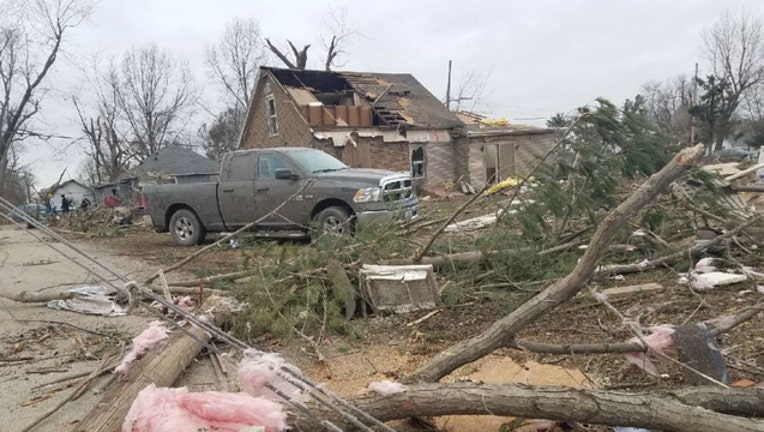 The severe weather in Illinois was part of a line of thunderstorms that raked areas of the central U.S. late Friday and into Saturday, killing one person in Missouri. Tornadoes were also reported in Arkansas and Oklahoma.

Photographs and video from Taylorville showed houses flattened, with residents wading into debris to salvage what they could. Some homes remained standing but with gaping holes in the roofs or with no roofs at all.

Local officials confirmed to Fox 32 News that 34 homes in the Taylorville/Hewittville area were completely destroyed, and 66 have major damage.

A Taylorville Memorial Hospital spokesman said 21 people, from age 9 to 97, arrived for treatment Saturday. Most were discharged within hours.

The National Weather Service has confirmed tornadoes in Oklahoma, Missouri and Illinois and was working to verify reports of tornadoes in Arkansas.

The National Weather Service says peak months for tornadoes in much of the Midwest are April and June.

It wasn't only twisters that were a concern. So were heavy rain and strong winds. A 75 mph wind gust at Springfield's Abraham Lincoln Capital Airport on Saturday evening set a December wind speed record for the Illinois' capital, the State Journal-Register reported.