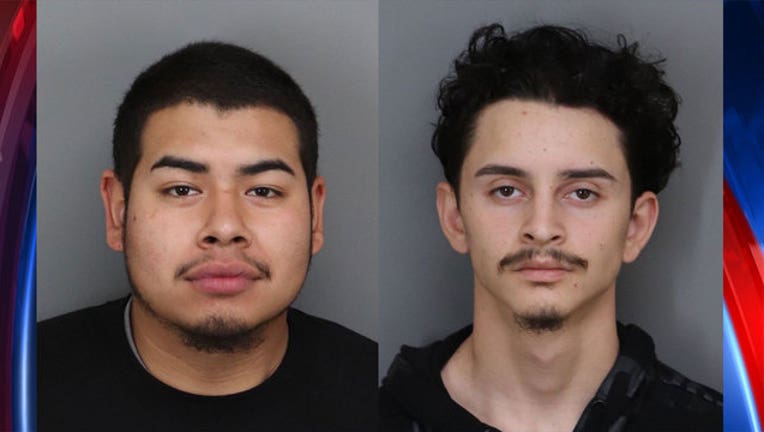 ONTARIO, Calif. (FOX 11) - Authorities arrested two men for allegedly shooting at a boy who caught them trying to steal his bicycle.

Juan Carlos Chavez, 18, and Anthony Sandoval, 18, were arrested and charged with attempted murder, according to the Ontario Police Department.

On Wednesday afternoon, Chavez and Sandoval drove to a store located in the 600 block of East Francis Street when Chavez exited the store and attempted to steal an unattended bicycle, police said.

“The 13-year-old owner of the bicycle confronted Chavez outside the store,” the Ontario Police Department said in a written statement. “As Sandoval and Chavez drove away, they fired a round toward the 13-year-old victim. Fortunately, the victim was not struck by the round.”

Officers in the area witnessed the shooting, according to police, and attempted to stop the suspect's vehicle.

The driver, Sandoval, led officers on a vehicle pursuit. During the pursuit, Chavez exited the vehicle and fled on foot to a residence in the 600 block of East Elm Street. Chavez later exited the residence and submitted to arrest. Sandoval was taken into custody after a brief pursuit.

There were no injuries to the victim or any of the parties involved, police said.

Officers obtained a search warrant and recovered five firearms from the residence. One of the firearms was reported stolen.

Anyone with information on this case is asked to contact the Ontario Police Department at 909-986-6711, or Detective Darryl Lauritzen at 909-408-1989. Information can also be reported anonymously by calling WE-TIP at (800)78-CRIME or online at www.wetipcom.