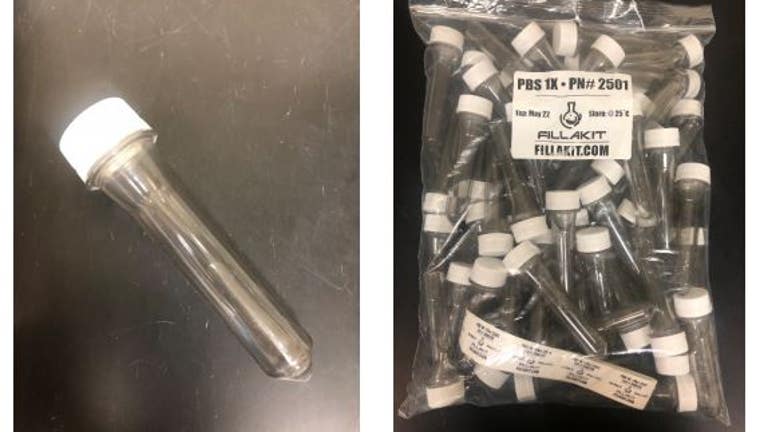 LOS ANGELES - The Federal Emergency Management Agency is reportedly urging states not to use COVID-19 testing supplies that were manufactured by a Texas company known as Fillakit due to the fact that the plastic used to make the kits were produced in “unsanitary conditions.”

ProPublica reported on Friday that the company Fillakit, whose product warehouse is located in Houston, produced coronavirus testing supplies under a $10.2 million contract that have allegedly been rendered “contaminated and unusable.”

The Wall Street Journal reported that the Department of Homeland Security’s inspector general is investigating the contract. According to the Journal, Fillakit LLC was established in Florida in May, nearly a week before being awarded the multi-million dollar contract by FEMA.

According to ProPublica, the Florida-based company made plastic preforms filled with saline, a mixture of salt and water traditionally used to clean wounds, and shoveled them into a warehouse in what workers reportedly described as an unhygienic manner.

ProPublica reported that the plastic preforms are designed to expand  with heat and pressure into 2-litre soda bottles. But they are more commonly used in elementary school science labs and don’t usually meet the same standards for equipment needed in a professional laboratory setting, according to medical experts.

Similar plastic preforms can be purchased on a supply website for teachers.

An advisory memo from FEMA and the U.S. Department of Health and Human Services (HHS) released by Missouri health officials on June 22 requested that testing facilities discontinue using the plastic test tubes produced by Fillakit.

“FEMA/HHS has recently become aware of potential quality issues with FILLAKIT LLC phosphate buffered saline (PBS) transport media that was provided to states and territories for COVID-19 sample collection,” the memo reads. “Out of an abundance of caution, we recommend this media not be used at this time. FEMA/HHS are currently in the process of analyzing the quality of the media in question and will be in touch with MSPHL early this next week to discuss media requirements.”

A spokesperson from the Washington State Department of Health told ProPublica that their department received over 76,000 Fillakit preforms delivered from FEMA, which they said are unusable.

“They were packaged unusually,” said Frank Ameduri, a spokesman for the state Health Department. “Not in a way we’re used to seeing, and they were not labeled. Some of them have been sent to our lab for quality control. None of the vials will be used until we’ve identified what’s in them and that they are safe for use.”

Teresa Green, a retired science teacher who worked at Fillakit’s Houston warehouse, told ProPublica she left the company after working there for two weeks out of frustration because of the unsanitary conditions at the company.

“It wasn’t even clean, let alone sterile,” she said.

A FEMA spokesperson did not immediately reply to a request for comment.