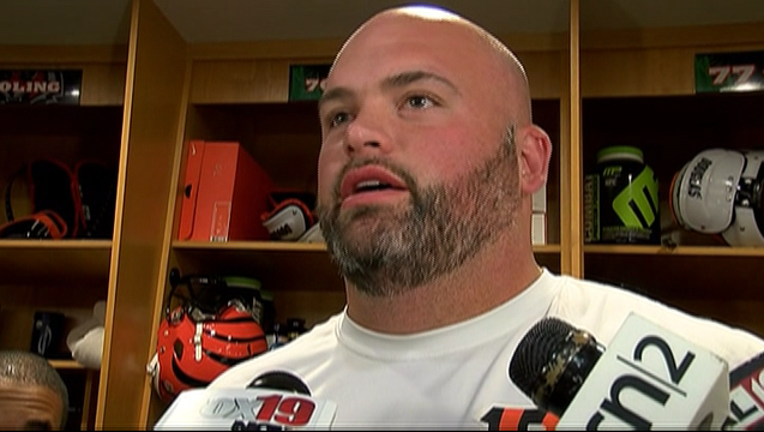 CINCINNATI (AP) — The NFL Network has apologized to Bengals players who were shown naked in the locker room during a postgame interview Sunday in Buffalo.

A network reporter was interviewing cornerback Adam "Pacman" Jones after a 34-21 win, and the videographer's angle included the entrance to the shower area. Several players were shown naked in the background.

NFL Network Executive Vice President Alex Riethmiller said during a conference call on Monday that the crew didn't follow network procedures that would have prevented it.

"It is a regrettable mistake by a production team, and one where we've already done a pretty thorough review of the procedures and processes that were dropped along the way to make sure that it doesn't happen again," Riethmiller said.

Left tackle Andrew Whitworth was one of those shown. Whitworth, who is the team's union representative, said on Monday that the league should restrict media access to prevent it from happening again.

He said the media shouldn't be allowed in the locker room while players are showering and dressing. He has lobbied for the NFL to have a more restrictive policy.

"It's just not right," Whitworth said. "There's no office, there's no other situation in America where you have to do that. It's dated, it's old and it needs to change."

Riethmiller isn't authorized to talk about the league's media access policies. He apologized "to everyone that was affected, to the players to the organization to the viewing public, first and foremost."

"This is a big issue to me," he said. "I've pressed this issue before with our union and the fact I think it's wrong. This is my office space. I shouldn't have to change in it and be in front of people I don't know or really don't have any purpose for being near me other than the fact they are interviewing other people."

Whitworth said there would be more concern if a female athlete was shown undressed.

"If I was a woman, this would be a completely different subject, and it would be a complete firestorm," Whitworth said. "We can't always just serve women and everyone else. Men deserve a right too. We have rights. We have privacy. We deserve all the things we want as well."

Whitworth also noted that a player's children would have to deal with comments at school and on social media about their father being shown undressed on television.