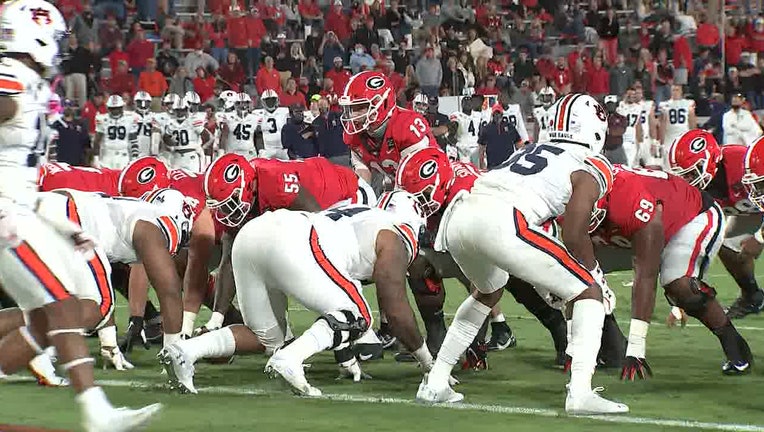 ATHENS, Ga. - Stetson Bennett threw for 240 yards and a touchdown in his first college start, Zamir White ran for a pair of scores and No. 4 Georgia romped to a 27-6 victory over No. 7 Auburn on Saturday night in the first Top 10 matchup of the college football season.

The Bulldogs (2-0) buried Auburn with a 24-0 blitz in the first half, extending their domination of the Deep South's oldest rivalry.

The teams had traditionally played in November, but a revamped Southeastern Conference schedule in this pandemic-affected season moved the game up to Week 2. It was their earliest meeting since the very first game in the series was played in February 1892.

No matter the time of year, Georgia kept the upper hand with a fourth straight victory over Auburn (1-1). The Bulldogs have won 13 of the last 16 meetings.

Bennett, a fourth-year junior known as "The Mailman," sure delivered before a socially distanced crowd of 20,524 at Sanford Stadium. He didn't make any major mistakes while completing an efficient 17 of 28 passes, including a 21-yard touchdown to George Pickens.

Bennett took advantage of a short field to guide a 43-yard touchdown drive on Georgia's second possession. Bennett converted a third-and-10 with a 17-yard pass to Jackson, and White powered in from the 1 to put the Bulldogs ahead 7-0. Jordan Davis, a 320-pound nose tackle, lined up at fullback to provide a key block.

After Jack Podlesny's 21-yard field goal extended the lead, Georgia put together touchdown drives of 84 and 72 yards on its next two possessions.

Pickens made his touchdown grab sliding toward the left corner of the end zone. Bennett hooked up with Jackson on a 49-yard completion that set White for another 1-yard TD run -- with the massive Davis again clearing a path.

Auburn finally got on the board with a field goal late in the first half, but the Tigers' offense simply never got going behind Bo Nix.

The sophomore quarterback completed just 21 of 40 passes for 177 yards. A run of 251 consecutive passes without an interception was snapped with a third-quarter pick by Mark Webb, ending the second-longest active streak in college football behind Clemson's Trevor Lawrence.

The Auburn running game was no help at all, held to 39 yards and a 1.8-yard average per carry.

Bennett initially walked on at Georgia, his parents' alma mater, but left for a junior college after one year when it looked as though he had no chance of ever playing for the Bulldogs.

He then planned to sign with Sun Belt school Louisiana-Lafayette, only to get an offer to return to Georgia after Justin Fields transferred to Ohio State, leaving the Bulldogs without an experienced backup behind Jake Fromm for 2019.

Bennett played sparingly last season, and it looked as though he might fall farther down the depth chart when Jamie Newman and JT Daniels transferred to Georgia to battle as Fromm's successor. But Newman opted out of the season, Daniels needed time to recover from a knee injury, leaving Bennett as the backup to redshirt freshman D'Wan Mathis in the season opener at Arkansas.

When Mathis struggled, Bennett got the call. He threw two TD passes, sparking the Bulldogs from a halftime deficit to a 37-10 victory over the Razorbacks.

Though Daniels was cleared to play against Auburn, the start went to Bennett.

It worked out just fine.

Auburn: Coach Gus Malzahn is sure to face renewed criticism after his offense turned in another miserable performance against the Bulldogs. They have scored a total of 37 points in the last four games in the series.

Georgia: Coach Kirby Smart was willing to play multiple quarterbacks against Auburn, but it wasn't necessary with Bennett's performance. The Mailman likely remains a tenuous starter -- Smart won't hesitate to go to Daniels or Mathis if the offense bogs down -- but Bennett is rapidly becoming one of college football's feel-good stories of 2020.

After rushing for 41 yards on five carries, Georgia running back James Cook left the game in the second quarter with an injured right shoulder.

Auburn faces Arkansas (1-1) to Jordan-Hare Stadium next Saturday. The Razorbacks will be coming in off a 21-14 upset of No. 16 Mississippi State.