DURHAM, N.C. - With a stunning breakaway layup at the overtime buzzer, Stephen F. Austin did what no team outside the ACC had done in nearly 20 years -- knock off Duke at home.

The Lumberjacks and their high-pressure, turnover-forcing defense took over Cameron Indoor Stadium, and Duke lost its grip on everything: The ball, the game, its prized home-court winning streak -- and, of course, the No. 1 ranking.

The Lumberjacks became the first non-Atlantic Coast Conference team to beat Duke at Cameron Indoor Stadium since St. John's in February 2000, and became the second unranked team to upset a No. 1-ranked school on its home floor in two weeks after Evansville went into Rupp Arena and stunned Kentucky 67-64.

"I told our players, `Banners can't beat us tonight,"' Stephen F. Austin coach Kyle Keller said. "The players have to beat us."

Duke had the ball in the closing seconds of overtime, but Tre Jones missed a jumper with about 15 seconds left and Wendell Moore rebounded it.

With the Lumberjacks' defense hounding Duke, the ball kicked away from Matthew Hurt in a scramble with about 3 seconds left and Gavin Kensmil snatched it and passed upcourt -- directly to Bain, who went the length of the floor for a buzzer-beating layup. 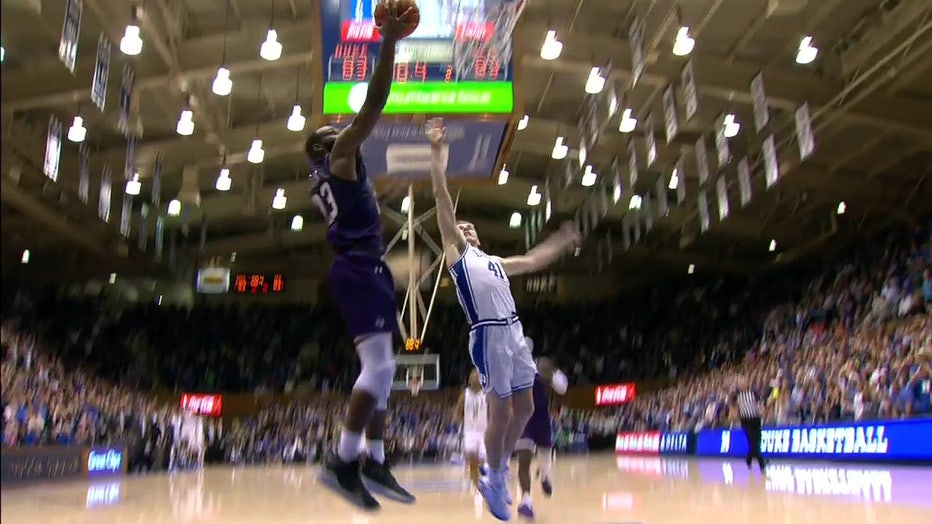 "I looked up at the clock and saw I had 2.6 seconds, just going as fast as I can to lay it up. Like a layup drill. Prayed it would go in," Bain said. "I wasn't sure if the guy was going to foul me or not. Get it on the rim to give us a chance."

"It means the world," Harris said.

Duke coach Mike Krzyzewski "told us at halftime about getting back" on defense, guard Cassius Stanley said. "It's kind of what we deserved. We didn't listen to him, and it hurt us eventually at the end."

Tre Jones had 17 points and 12 assists -- but also eight turnovers against a high-pressure Stephen F. Austin defense that is the nation's best at generating takeaways. The Lumberjacks, who entered at No. 262 in Ken Pomeroy's efficiency rankings, lead Division I by forcing 25.8 turnovers per game -- a huge challenge, it turned out, for a young Duke team that started four freshmen and a sophomore and has had issues taking care of the ball. 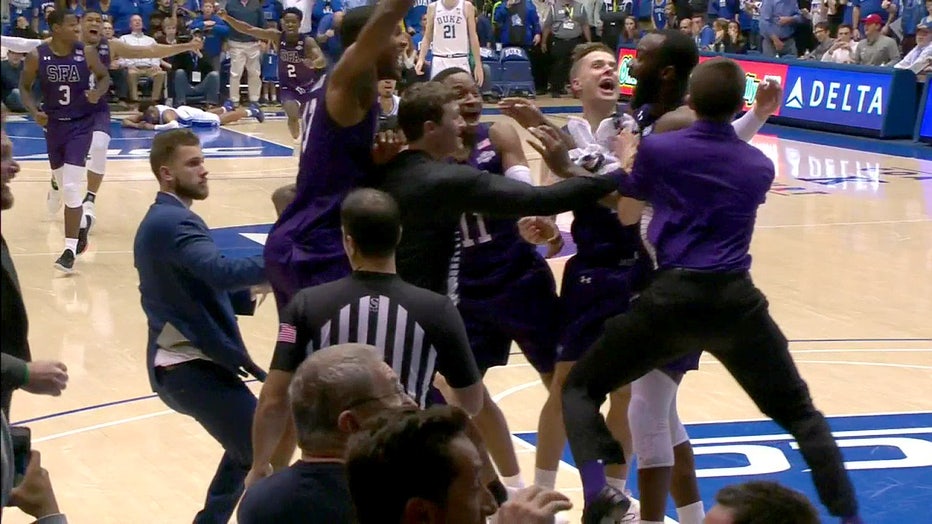 "Deny the ball, pressure teams, turn them over," Bain said. "People don't like pressure. Everyone wants to be comfortable, be able to see the floor. It's a winning formula -- you deny passes, you pressure the ball, make people play one-on-one, and that's hard. You can't do that for 40 minutes. You have to have some great lungs."

There were two ties and a lead change in the final minute of regulation, with Kensmil tying it at 81 with his layup with 19 seconds remaining. That left Duke with the last shot before OT, but after Jones missed a turnaround jumper with about 4 seconds left, the rebound was batted around to Stanley, whose jumper off the glass went off the rim at the buzzer.

Stephen F. Austin: No question the Lumberjacks earned the biggest victory in program history. Bain, a fifth-year senior, was a freshman on the Thomas Walkup-led team that upset eighth-ranked West Virginia as a No. 14 seed in the first round of the 2016 NCAA Tournament.

Duke: This Duke team didn't have the feeling of invincibility that some of its predecessors had, in part because it had at least 16 turnovers in three of its first six games. The Blue Devils' offense was completely flummoxed at times by the Lumberjacks' unrelenting pressure, and as a result, their run at No. 1 will end after two weeks. For the second straight season, they lost at home to an unranked team as the No. 1 team, with the Zion Williamson-led squad falling to Syracuse.

Duke became the third No. 1 team to lose -- and Thanksgiving hasn't even arrived yet -- and this loss is going to cost the Blue Devils at least a few spots in the poll Monday.

Duke fell to 292-9 in nonconference home games under Krzyzewski and this was the first such loss since an 83-82 setback against St. John's on Feb. 26, 2000. The loss means the nation's longest such winning streak now belongs to Butler -- which has 55 straight nonconference wins at Hinkle Fieldhouse.