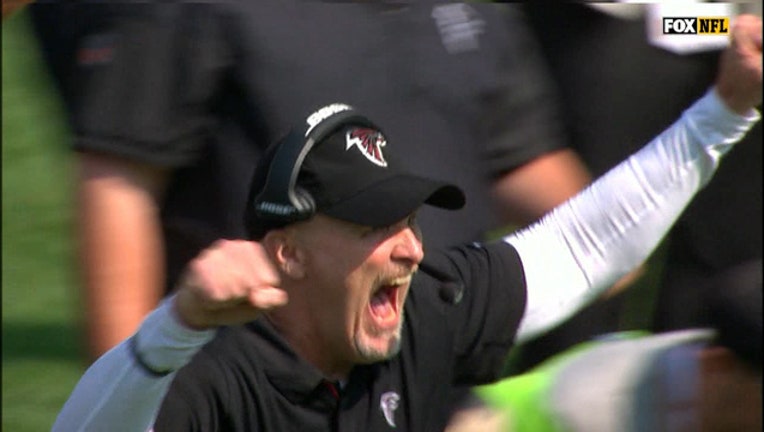 CHICAGO (AP) - Matt Ryan threw an 88-yard touchdown to Austin Hooper and led two fourth-quarter scoring drives, and the NFC champion Atlanta Falcons held on to beat the Chicago Bears 23-17 in the season opener on Sunday.

The butt of jokes following their epic Super Bowl collapse against New England, the Falcons survived as the Bears missed several chances to score a touchdown in the final seconds.

The Bears had a first down at the Atlanta 5 in the closing minute. Glennon's pass to a lunging Josh Bellamy on first down hit off the receiver's hands, and Jordan Howard then dropped a simple catch at the 1.

After another incompletion on third down, Glennon got sacked by Brooks Reed to end the drive.

Atlanta was clinging to a 13-10 lead early in the fourth when a scrambling Ryan fired to a wide-open Hooper near midfield. The second-year tight end from Stanfordraced up the right side and stiff-armed Quintin Demps on the way to the end zone to make it a 10-point game.

The Bears then went 75 yards, with Glennon hitting rookie Tarik Cohen for a 19-yard TD midway through the fourth to cut it to 20-17. Atlanta's Matt Bryant answered with a 37-yard field goal, making it 23-17 with 3:24 left.

In his Bears debut, Glennon didn't silence fans who would rather see No. 2 overall draft pick Mitchell Trubisky. He was 26 of 40 for 213 yards and a TD.

Cohen made an impressive debut with 66 yards rushing and 47 receiving. He reversed field on a 46-yard run, helping set up Howard's 4-yard touchdown near the end of the half.

Receiver Kevin White found himself in a familiar position, walking off the field with an injury. He had two catches for six yards before hurting his shoulder. White was limited to four games in his first two seasons after being drafted seventh overall in 2015.