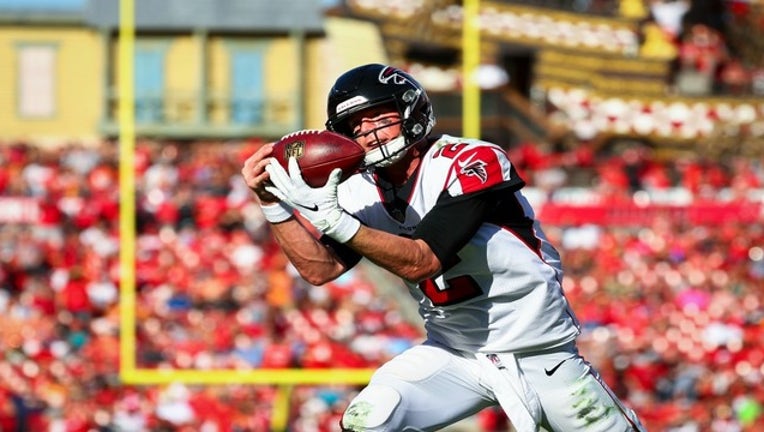 TAMPA, Fla. (AP) - Atlanta's Matt Ryan talked about the margin for error in the NFL being "razor thin."

Dirk Koetter spoke of Tampa Bay being closer to winning than its record suggests, but that "close with no cigar" is not good enough in a results-based league.

"If we make a few plays in some games throughout the course of the year it could have been a very different football team," Ryan said Sunday after his first career reception went for a touchdown and the Falcons quarterback also threw for 373 yards and two TDs to conclude the season with a 34-32 victory over the Buccaneers.

"It's disappointing, but it also leads me to be optimistic for us moving forward that we have the right people and the guys that are capable of contending late into the year," Ryan added, alluding to the team stringing together three consecutive wins down the stretch to finish 7-9.

Koetter fell to 19-29 in three seasons at Tampa Bay's coach. The Bucs (5-11) led the NFL in passing yardage and have the most prolific offense in franchise history, but that didn't save his job.

The club announced the 59-year-old's firing about three hours after the game, which Koetter described as a "microcosm" of Tampa Bay's season.

"Numbers are nice, but this is a winning league," Koetter said. "I've been fired before and I've been hired before. I know this, if you can look yourself in the mirror at end the day and know you did everything you could, then I've no problem holding my head up."

Matt Bryant's second field goal, a 37-yarder as time expired, provided the winning points after Jameis Winston rallied the Bucs (5-11) from a 31-20 deficit to a one-point lead with just over five minutes to go.

The Falcons (7-9) escaped a 17-0 hole with Ryan leading scoring drives on five consecutive possessions from late in the second quarter until early in the fourth. He began the comeback with a 19-yard scoring throw to Julio Jones and also tossed a 7-yarder to Calvin Ridley.

In between, Ryan caught a 5-yard TD pass from receiver Mohamed Sanu, Bryant kicked a 49-yard field goal and Tevin Coleman scored on a 23-yard run.

"My hands are pretty good, my route running is not very good. I had to draw back on playing for the Downingtown Young Whippets in like third and fourth grade when I was playing tight end," Ryan said.

"A great call. I'm glad when it was time to get the job done, we did it," Ryan added. "It was cool to catch my first NFL pass and first NFL touchdown. It took me 11 years. It was a good play and fun to be a part of it."

Ryan finished 31 of 44 with one interception, a fourth-quarter pick that led to Winston's second TD throw to Chris Godwin for Tampa Bay's brief 32-31 lead. Mike Evans also caught of a pair of TD passes from Winston, who was 22 of 35 for 345 yards and four TDs with one interception.

Jones had nine receptions for 138 yards. Sanu had seven catches for 90 yards, in addition to throwing his fourth career touchdown pass.

Godwin had six catches for 114 yards and Evans had six receptions for 106 yards for the Bucs, who finished last in the NFC South for the seventh time in eight years.

The Bucs finished with a four-game losing streak, and also must decide if Winston is their quarterback of the future.

Winston missed the first three games of the season while serving a three-game suspension for violating the NFL's personal contact policy and was benched twice before regaining his starting job down the stretch.

The No. 1 overall pick from the 2015 draft is due to earn $20.92 million next season in the final year of the contract he signed as a rookie; however, the salary is only guaranteed in the event of injury.

Winston said he hasn't been told if he'll be back next year.

"All I can say is, I've got a ton of respect for coach Koetter and what he has done for me and this team since he's been here," Winston said before the firing was announced.

The Falcons won it with a 13-play, 56-yard drive that produced Bryant's 37-yard field goal and burned the last 5:10 off the clock. Ryan's 16-yard completion to Jones on third-and-11 kept the march alive at the Tampa Bay 16 forcing the Bucs to burn their last timeout with 1:47 left.

The Falcons decided they didn't need to get any closer. Ryan took a knee three times, while also strategically using the team's three timeouts to milk the clock to four seconds before Bryant came on to win it.

"Going that direction our cutoff was the 38-yard line. ... It was a really good third down call, great conversion by Julio," Ryan said. "For us to get it down that close, it was a chip shot for Matt, and he's been amazing throughout his career at being clutch."

Buccaneers: WR DeSean Jackson (Achilles) was inactive for the fourth time in five weeks. DE Carl Nassib (shoulder) also did not dress. ... CB Carlton Davis left in the third quarter with an ankle injury and did not return. ... S Isaiah Johnson left with a shoulder injury in the fourth quarter.

Falcons: Just two years removed from appearing in the Super Bowl, they will miss the playoffs for the first time since 2015 when they finished 8-8 in their first season under coach Dan Quinn.

Buccaneers: With Koetter gone, general manager Jason Licht's future could be in jeopardy, too.