While they say pitching wins in the postseason, the Braves also have their defense to thank for getting them out of some tough spots to get here. A big player in developing that infield defense has been none other than Ron Washington.

"It meant a lot to me to know that I made a decision to come to Atlanta and I’m so happy," the Braves third base coach said.

And Atlanta is certainly happy to have third base coach Ron Washington along for this ride. His instruction on infield defense has proven pivotal at multiple points during this postseason.

Even Gold Glover Freddie Freeman has been working more with Washington in this shortened season -- a session that lasts about five minutes every day but ensures his defense has been on point.

"Sometimes our routines are boring but that's baseball. You have to stay in a routine in baseball. You have to come to the ballpark every day and do the same thing over and over, and it can get boring," Washington said. "But it never get boring with these guys, and that's what keeps me energized: being around a group that want to work because I was taught to work and that’s the only way I know about going about things that you have to do so you can maintain in the game of baseball consistency."

"I have gold on my glove because of Ron Washington," Freeman said. "He has so much fun and joy for this game, and it wears off on us. He makes you so much better, and you want to get better because he’s out there working harder than you." 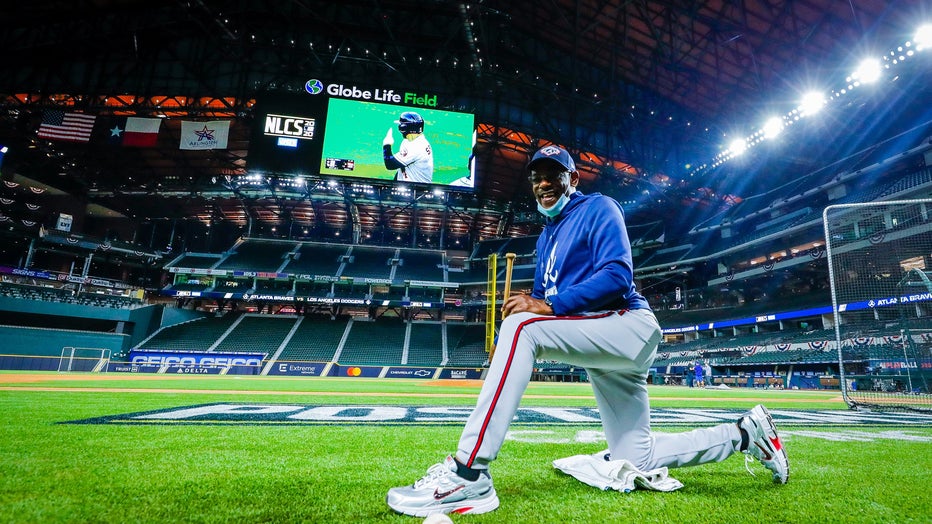 ARLINGTON, TX - OCTOBER 11: Third Base Coach Ron Washington #37 of the Atlanta Brave jokes around during the workout for the NLCS between the Los Angeles Dodgers and Atlanta Braves at Globe Life Field on Sunday, October 12, 2020 in Arlington, Texas.

And even at 68 years old, Washington is still full of energy, and of course wisdom, and you can see how these players feed off his presence.

"I look back in my career, as a player, as a coach, as a manager -- I’ve only made one decision in my life to leave a ball club in my career the baseball player and as a baseball man I’ve always been where I was until I had to leave. The decision I made to come to Atlanta is the best decision of made where I had to make a decision," Washington said. "I got involved with an organization that has a lot of young kids that already have character. They are so humbled and you know it is a joy to be around every single day because they come to the ballpark for one thing: to be the very best that they could possibly be for each other and that's something you have to really build but I found that to already be here with these young kids when I came here."

Of course, the NLCS bubble now is in the very city where Washington managed teams that came close to winning two World Series titles in 2010 and 2011.

"I would have liked to raise those -- that opportunity that you’re talking about here in Texas. Even though we in Arlington, it would be nice to win the championship here, but the flag will be hoisted in Atlanta," Washington said. "I had two opportunities to do it here, and I always look back on those times and I said it wasn't meant to be, you know, it wasn't meant to be."

Washington said he still has aspirations to manage a club again.

He said he's just not ready to stop giving back to the game of baseball.

"This game you know it’s about giving and I think I have a lot of wisdom and a lot of knowledge to give and I just keep giving as much as I possibly can and I try to tell them the day will come that they would have to give and don't hold back just keep giving because that’s what it’s about," Washington said. "That’s why you see so much joy in me about loving the game of baseball because there was a lot of people that influenced my life and I just try to pass the things on that I got in the game of baseball and what I've learned in life and hopefully you know at some point those guys transfer it to help people in the world. The game of baseball just keep on moving and the joys keep coming."