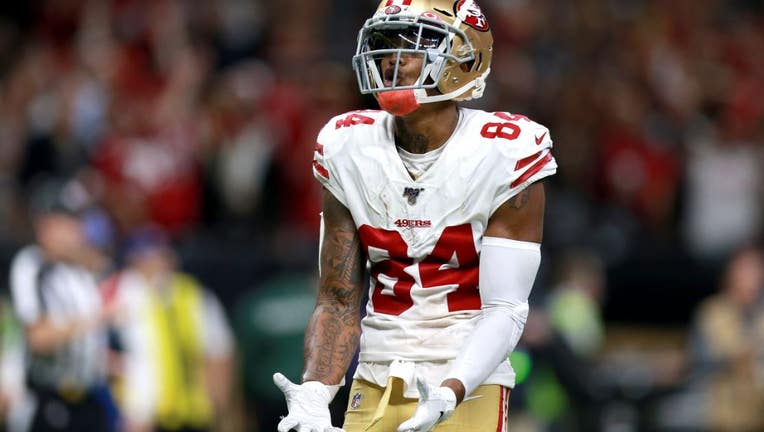 FILE - The San Francisco 49ers have placed Kendrick Bourne on the COVID-19 list after the wide receiver tested positive for the virus. (Photo: Getty Images)

SANTA CLARA, Calif. - A San Francisco 49ers player tested positive for COVID-19 and the facility has been shut down as contact tracing protocol is initiated, the team confirmed Wednesday.

Wide receiver Kendrick Bourne was placed on the team's COVID-19 list and immediately went into self-quarantine, the Niners said. The latest setback comes list just one day before the team is set to host the Green Bay Packers at Levi's Stadium for Thursday Night Football.

In a statement, the 49ers had entered the league's "intensive protocol."

"The San Francisco 49ers were informed today that a player has tested positive for COVID-19 and the individual immediately went into self-quarantine. Our organization has entered the NFL's intensive protocol and we are working with the league on contact tracing to identify high risk individuals," the statement said.

Now at the midway point, the season has been tough for the 4-4 Niners. Injury news has been piling up since the start and they just lost two offensive captains. Quarterback Jimmy Garoppolo and tight end George Kittle both left Sunday's loss to the Seahawks with injuries. They'll each miss extended time, and possibly the rest of the season.

Losing Bourne, who is the team's third-leading receiver, means the 49ers are heading into Thursday's game light on this position. Deebo Samuel is out with a hamstring injury, Richie Thomas is dealing with a sprained ankle and second-round pick Dante Pettis was waived earlier this week. As of Wednesday, rookie Brandon Aiyuk and Trent Taylor are the only active receivers who have caught a pass this season.

Enter the NFL Challenge contest on the FOX Super 6 app for free and you can win the $1 million jackpot. Download now.