The Seattle Seahawks (2-2) will host the Los Angeles Rams (3-1), the first meeting between the division rivals since their Jan. 9 meeting in the Wild Card round. The Rams bested the Seahawks in that one 30-20.

Los Angeles comes into Thursday's game slightly favored. The Rams suffered their first loss of the young season Sunday when they fell to the still-unbeaten Arizona Cardinals.

Quarterback Matthew Stafford has excelled so far in his first season with the Rams. His 1,222 passing yards 117.6 passer rating both place fourth in NFL standings. And his 11 touchdown passes are second-most in the NFL. 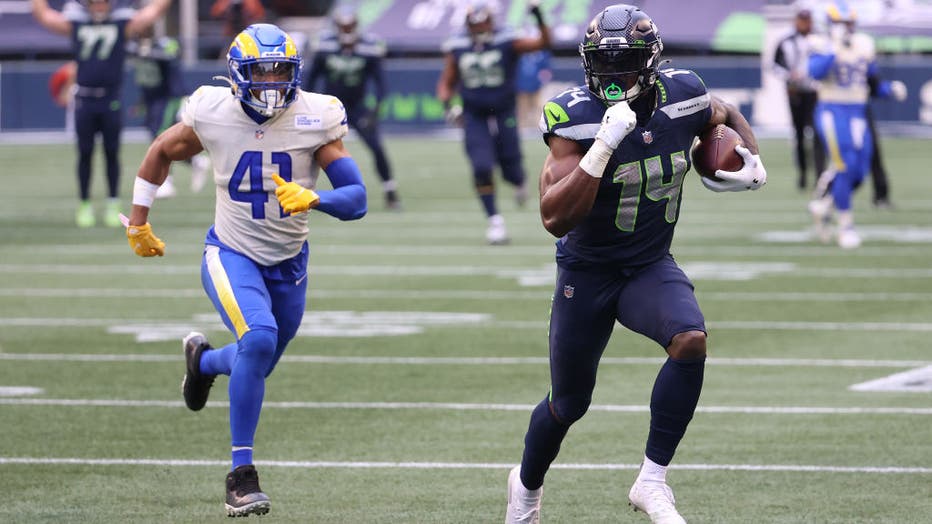 Wide receiver DK Metcalf, No. 14 of the Seattle Seahawks, completes a reception over inside linebacker Kenny Young, No. 41 of the Los Angeles Rams, and carries for a touchdown during the second quarter of the NFC Wild Card Playoff game at Lumen Field

But don’t count out the Seahawks just yet. Their quarterback, Russell Wilson, boasts the best passer rating in the NFL at 129.9. And his completion percentage of 72.5 ranks fourth among NFL quarterbacks.

Wilson will be passing to DK Metcalf, whose 6-foot, 4-inch, 235-pound frame and speed rivaling Olympic sprinters often present a challenge for even the most capable defenders. But the ultra-confident all-pro defensive back Jalen Ramsay will aim to deny him the ball the whole night.