NEW ORLEANS - Georgia freshman receiver George Pickens left behind his regrettable ending to the regular season and put the rest of college football on notice that he will be an exceedingly tough cover in 2020.

Pickens caught 12 passes for 175 yards and a touchdown, and No. 5 Georgia defeated eighth-ranked Baylor 26-14 in the Sugar Bowl on Wednesday night.

“I've still got growing to do, but I can kind of tell myself I'm improving every day,” said the 6-foot-3 Pickens, who was suspended for the first half of Georgia's SEC title game loss to LSU because of his fight with a Georgia Tech player in the Bulldogs' regular-season finale. “It was a great season to me. You win some, you lose some.”

Baylor quarterback Charlie Brewer, coming back from a concussion in the Big 12 title game on Dec. 7, was sidelined again in the fourth quarter when the back of his head appeared to hit the turf hard as he was taken down by two defenders while going out of bounds.

Baylor coach Matt Rhule said Brewer did not appear concussed this time. Medical staff was concerned about possible spinal and neck injuries. Rhule expected Brewer to be monitored overnight, but added that early indications were the injuries were not career threatening.

“It's scary when they were holding his head and stabilize his neck and he's yelling at them to let go of him and let him go back in the game,” Rhule said. “He's a great player whose best football is in front of him." 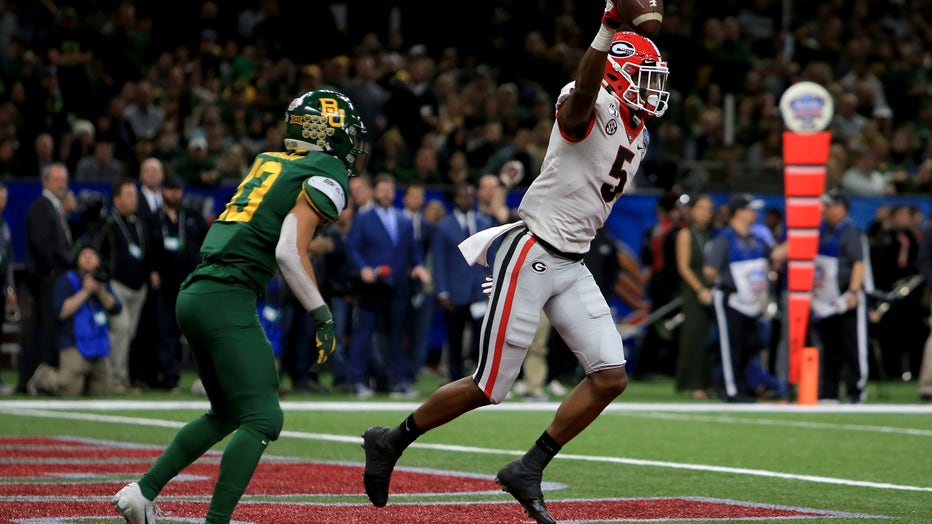 Travon Walker was penalized for a late hit, giving Baylor a first down, but the drive stalled on a sack of backup Jacob Zeno on fourth down with five minutes to go and Baylor down 12.

Jake Fromm completed 20 of 30 passes for 250 yards and two touchdowns without an interception for Georgia (12-2), which lost the Sugar Bowl to Texas last season.

Zamir White carried 18 times for 92 yards and a touchdown, and Matt Landers caught his first career TD on a 16-yard pass.

Pickens was selected the game's most outstanding player.

“Seeing him do something like he did today - no surprise to us,” Fromm said. “He's just going out and playing the game he loves.”

Brewer completed 21 of 41 passes for 211 yards and one touchdown to Denzel Mims.

After Georgia led 19-0 at halftime, Baylor (11-3) showed signs of mounting a comeback on the opening series of the second half with a scoring drive dominated by Mims. He had catches of 40 and 8 yards before his 12-yard touchdown grab trimmed the Bulldogs' lead to 19-7. Mims also surpassed 1,000 yards receiving for the season on the drive.

The Bears quickly forced a Georgia punt and moved back across midfield when momentum suddenly changed. Linebacker Azeez Ojulari sacked and stripped Brewer on fourth-and-4 and Walker recovered on the Baylor 47.

“I really, really regret my decision to go for it on the one fourth down,” Rhule said. “That was a bad coaching moment on my end. It quickly led to points. So that goes against me."

The Bulldogs capitalized with a touchdown drive extended by a fake field goal in which holder Jake Camarda ran off tackle for 6 yards on fourth-and-2. White finished the series with a tackle-breaking 13-yard run to the pylon to make it 26-7.

Pickens' 46-yard catch deep down the middle on a flea flicker set up the first points of the game on Rodrigo Blankenship's field goal.

The Bulldogs widened the lead on Fromm's 27-yard fade pass to the Pickens in the left side of the end zone.

Georgia was without about a dozen regulars, including three starting offensive linemen. Some players were hurt while others sat out to preserve their health for the NFL draft.

Meanwhile, top running back D'Andre Swift saw only limited action because of an ailing shoulder.

“These guys, four-star, five-star guys. They’re more than capable of coming in and doing what they've got to do,” LeCounte said.

Georgia: The Bulldogs demonstrated their depth and motivation to turn in a better Sugar Bowl showing than a year ago. Georgia's running game, which produced 130 yards, was strong enough to give the Bulldogs nearly five minutes more possession.

Baylor: The defense sacked Fromm three times and was solid enough to keep the Bears in the game until the fourth quarter, but Baylor's offense struggled much of the night and had little balance with just 61 yards rushing.

Georgia: The Bulldogs await Fromm's decision on whether he'll turn pro with one season of eligibility left. Georgia will open next season in Atlanta on Labor Day against Virginia. The SEC opener comes 12 days later on Sept. 19 at Alabama.

Baylor: The Bears expect to have prominent players back and once again be among the contenders to win the Big 12. They open on Sept. 5 in Houston against Mississippi and play at Oklahoma in a rematch of the conference title game on Oct. 3.