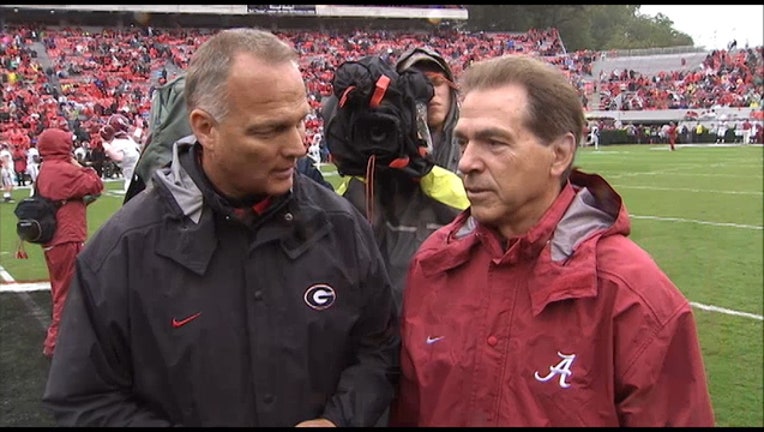 ATHENS, Ga. (AP) - With its season in the balance, No. 13 Alabama had quite a response on Saturday.

The Crimson Tide is still very much a force in the national race.

Jake Coker ran the offense to perfection, the defense turned in a dominating performance, and No. 13 Alabama even got a touchdown from its special teams in a 38-10 rout of No. 8 Georgia.

Alabama (4-1, 1-1 Southeastern Conference) jumped ahead 24-3 at halftime and iced the victory on Georgia's first offensive play of the second half. Eddie Jackson intercepted a pass from the Bulldogs' second quarterback, Brice Ramsey, and returned it 50 yards for a touchdown.

After a discouraging, five-turnover loss to Mississippi in its SEC opener two weeks ago, the Tide looked more like itself on a rainy day between the hedges.

"I told them before the game that the plan we had for them, ordinary men couldn't go out there and get it done," said coach Nick Saban, whose team avoided its first 0-2 start in the SEC since 1990. "We needed them to be extraordinary."

And Saban was about as close to gleeful as he can get.

"I know they've been criticized a lot, but I thought we played an outstanding game today, every part of the game," he said.

Indeed, the Tide scored touchdowns on offense, defense and in the kicking game.

Coker, with an assist from Lane Kiffin's play-calling, completed 11 of 16 for 190 yards, passed for one touchdown, and ran for another. Derrick Henry rushed for 148 yards and scored on a 30-yard run that put Alabama ahead to stay midway through the second quarter.

"Ever since I was little, I've dreamed of beating Georgia and all those good schools," said Coker, a transfer from Florida State in his first season as the Tide's starter. "This is pretty sweet."

Georgia (4-1, 2-1) yanked starting quarterback Greyson Lambert late in the first half, but it didn't matter. He even went back in after Ramsey threw his second interception.

"Their defense made plays and covered our guys well," Lambert said. "This just wasn't our day."

After completing 33 of 35 passes in the previous two games against South Carolina and FCS opponent Southern University, Lambert was 10 of 24 for 86 yards and an interception on his final throw. Ramsey was even worse (1 of 6 for 20 yards), leaving Georgia with a huge question mark at the most prominent position on the field.

"We've got to re-evaluate everything," coach Mark Richt said. "The quarterback play. Everything."

With the game tied at 3, Henry burst untouched through the middle of the line to cap an eight-play, 76-yard drive. Little did the home crowd of more than 91,000 realize, the Tide was just getting warmed up.

Minkah Fitzpatrick darted through the line to block a Georgia punt, the ball bouncing right into his arms at the 1 for an easy touchdown. Then, after Georgia went three-and-out for the sixth time in its first seven possessions, offensive coordinator Kiffin went for the jugular on his team's very next play.

Coker sucked in the defense with play action and launched a 45-yard touchdown to Calvin Ridley, hitting the freshman receiver right in stride down the middle of the field.

For good measure, Coker added a 1-yard run for a touchdown that stretched Alabama's lead to 38-3 less than 5 minutes into the second half.

The steady rain really started coming down after halftime. Midway through the third quarter, Georgia fans were streaming toward the exits on a dreary evening that thoroughly matched the mood of the red-clad crowd.

The game was a virtual repeat of Alabama's last visit to Sanford Stadium in 2008, when a Georgia team that started the season ranked No. 1 came out wearing black jerseys as part of a "blackout," only to fall behind 31-0 at halftime. The 41-30 victory signaled the start of Saban's dominating run in Tuscaloosa, which has resulted in three conference titles and three national championships.

The Bulldogs wore their regular red jerseys against the Crimson Tide this time.

It didn't make any difference.

Georgia added to its reputation of flopping in the biggest games. Even though the Bulldogs have a favorable schedule the rest of the way and still have a reasonable shot at playing in the SEC championship game, it's hard to imagine a team that lost so badly on its home field getting any serious consideration in the national picture.

The only highlight for the home team was Nick Chubb's 83-yard touchdown run in the waning second of the third quarter. That provided the bulk of his 146-yard effort, which extended his streak of 100-yard games to 13 in a row.

Only a smattering of Georgia fans were still around to see it.