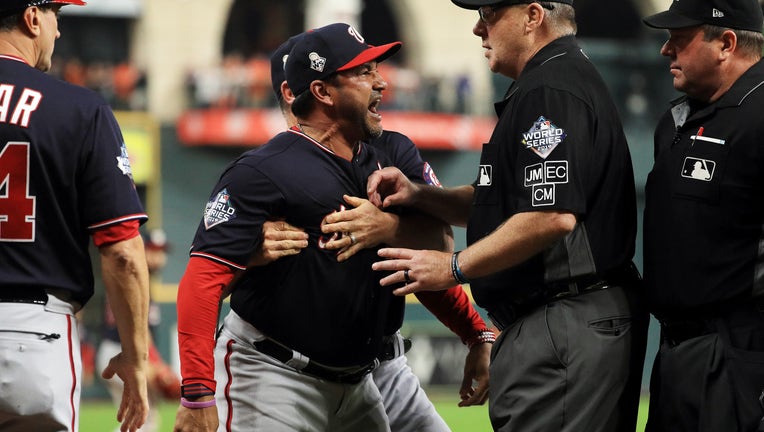 HOUSTON, TEXAS - OCTOBER 29: Dave Martinez #4 of the Washington Nationals argues as he is ejected by the umpire and is held back by Bob Henley #14 against the Houston Astros after the top of the seventh inning in Game Six of the 2019 World Series at (Photo by Mike Ehrmann/Getty Images)

HOUSTON - Major League Baseball executive Joe Torre says the "right call" was made and that a protest was denied after Nationals leadoff hitter Trea Turner was called out for interference during Washington's 7-2 Game 6 victory in the World Series on Tuesday night.

Nationals manager Dave Martinez was ejected for arguing plate umpire Sam Holbrook's ruling in the seventh inning, and Torre said Washington's request to protest the game was denied because it was a judgment call.

Holbrook's signal came after Turner hit a slow roller down the third base line with a runner at first and ran narrowly inside fair territory.

Pitcher Brad Peacock fielded the ball, and his throw pulled first baseman Yuli Gurriel toward the baseline. As Gurriel stretched, Turner ran into his glove, and the ball bounced off Turner's leg and into foul territory. Turner ended up at second, with lead runner Yan Gomes going to third -- except Holbrook quickly signaled for interference.

Turner was called out and Gomes sent back to first base. After some argument from Martinez and the Nationals, umpires went to the headsets for 4 1/2 minutes before upholding the call. The overall delay stretched over 10 minutes.

The Nationals wanted to pursue a protest, and Turner was heard on television pointing to Torre, MLB's chief baseball officer, in the stands and shouting "He's right there!" and "Just ask him!"

"The call was the fact that he interfered with Gurriel trying to catch the ball," Torre said, adding that Holbrook "made the right call at first base."

Turner said he was pointing out Torre because he felt there could have been some clarification then about what had just happened.

"We should do everything we possibly can to get the calls on the field right," Turner said. "If it's in the rules that I did the wrong thing, then so be it, but I think this stage is too big and too important to a lot of people to have every avenue not taken advantage."

Torre said that while MLB and its umpires want to "double and triple-check ourselves" in the World Series, the delay shouldn't have lasted as long as it did.

"I don't know if it was the noise or whatever it was. I know we had a hard line in our box and we had trouble reaching people because we tried to make some calls, we couldn't do it," Torre said. "It should never be that long. That's unfortunate. And certainly we have to take ownership of that."

Martinez stepped onto the field to talk with Holbrook and crew chief Gary Cederstrom after the inning and quickly became animated. Six weeks after having a heart procedure, Martinez was restrained by bench coach Chip Hale -- or at least Hale tried -- as the manager kept shouting and eventually was tossed.

Martinez is the first manager to be ejected from a World Series game since Atlanta's Bobby Cox in 1996.

The Major League Baseball Umpires Association tweeted that the call was correct. The Association's statement said Turner did not run in the three-foot lane located in foul territory. Runners are permitted to exit the running lane to touch first base, which is in fair territory, but they must remain in the lane until moving toward first with a "step, stride, reach or slide."

Two batters after Holbrook's call, Anthony Rendon hit a two-run homer to put Washington ahead 5-2. Rendon added a two-run double for a 7-2 lead in the ninth.

"I didn't think he was out of the line," Rendon said, adding he was happy to take a seat and rest during the delay.

Torre came onto the field a half-inning later and had a conversation with Cederstrom.

Holbrook's call was roundly criticized by other players on social media. Cleveland Indians pitcher Mike Clevinger tweeted it was "just plain ugly," and Chicago Cubs slugger Kyle Schwarber called it "a bad rule," suggesting MLB should adopt a wider "safety bag" like those used in many slow pitch softball leagues.