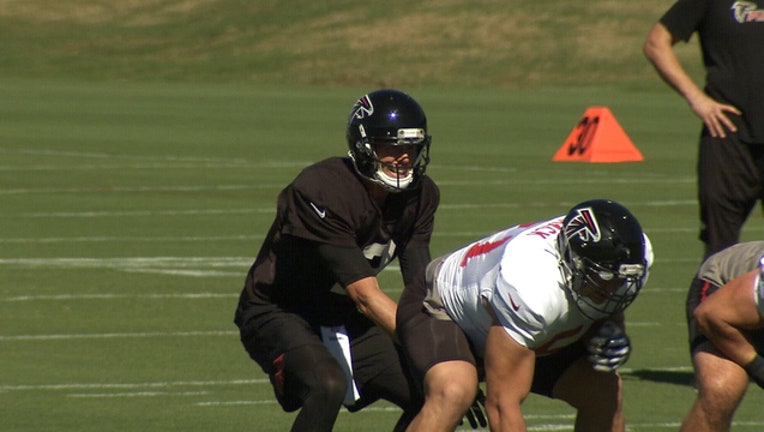 Points are way down. Interceptions are way up.

And now, the NFL's reigning MVP must face the team that dealt the Atlanta Falcons so much heartache.

Not that Ryan needed it, but it's certainly a reminder of how much changed since the fateful second half in Houston.

"We obviously haven't played as well as we're capable of through five games," the Falcons quarterback said after practice Wednesday. "But we're certainly close. We've done a lot of really good things at times."

That's a bit of a stretch.

By just about any standard, Ryan and the Falcons have slipped on the offensive side as they prepare for Sunday night's game in Foxboro against Tom Brady and the New England Patriots, the team that eight months ago overcame a 28-3 deficit in the second half to win the Super Bowl's first overtime game .

Even more troubling, they've been outscored 72-40 in the second half.

"I still have high expectations," Ryan said. "I think everybody does. I think we're closer to playing good ball and winning games."

Positive vibes aside, Ryan's numbers are down in nearly every category.

While the turnovers have drawn much of the attention - Ryan has thrown six picks in the last three games, only one less than he had all of last season, and also coughed up a fumble that was returned for a touchdown - the lack of big plays may be the most perplexing statistic.

A year ago, Ryan connected for a touchdown on 7.1 percent of his pass attempts. He's at 3.5 percent this season.

Stunningly, All-Pro receiver Julio Jones has yet to catch a TD pass. The five-game drought matches the second-longest scoreless stretch of his career.

"There are parts of our game that we're doing better than we did," coach Dan Quinn insisted. "We're not getting as many explosive plays, for sure. That's a number we certainly look to increase."

The Ryan-led offense returned largely intact after the run to the Super Bowl - with one major exception.

Coordinator Kyle Shanahan left to become head coach of the San Francisco 49ers and was replaced by former college head coach Steve Sarkisian , who is calling plays in the NFL for the first time. In a sign that things are a bit out of sync, Sarkisian started the season coaching from the field, only to be sent to the press box by Quinn after a bye week.

Last Sunday, the Falcons turned conservative after building a 17-0 halftime lead on the Miami Dolphins, who rallied for a stunning 20-17 victory . Ryan drove the Falcons into position for a tying field goal, only to throw an interception with less than a minute to go .

Now, it's time for that Super Bowl rematch.

While Ryan and the Falcons have done their best to get escape the shadow of a historic meltdown, there's no getting away from it this week.

"I think it's always going to be a part of you," Ryan acknowledged, grimacing a little.. "There are things throughout your life that motivate you to be the best player that you can be, that get you out of bed in the morning. For sure, from a big-picture standpoint, you use all those things as motivation. But honestly, it's about this 2017 team. Seeing how good we can be. Seeing how good we can be offensively. Seeing how we can be better from last week to this week. That's the mindset you have to have during the regular season, during the postseason. You have to be locked in week to week."

Quinn struck down any suggestion that Sarkisian and Ryan are struggling to mesh.

"I love the connection that they have," the head coach said. "We hit a couple of ice spots and didn't nail it like we need to. But as far as our team, I love where we're headed. We've got good guys. We know how to feature them and know how to use them."

"We're very much on the same page," Ryan insisted. "I think we'll continue to get better, for sure. I think he's got a better understanding now, having been here and gone through game situations and all those type of things. I think he's gotten better as the year's gone on."

Ryan's slow start hasn't cost him any support in the locker room.

He is the unquestioned leader of this team.

His teammates are confident he will turn things around.

"Matt's a great leader and a great, great teammate," left tackle Jake Matthews said. "I'm not really worried about him."