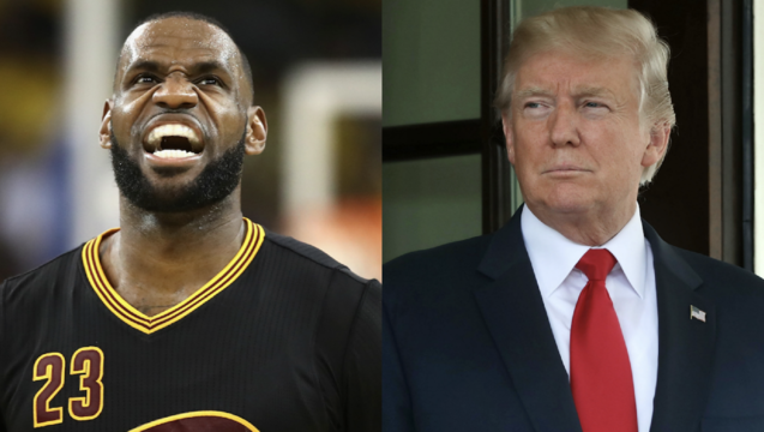 “U bum @StephenCurry30 already said he ain't going! So therefore ain't no invite. Going to White House was a great honor until you showed up!” James tweeted.

“Going to the White House is considered a great honor for a championship team,” the president wrote early Saturday morning. “Stephen Curry is hesitating. Therefore invitation is withdrawn!”

It's unclear if Trump meant just Curry or the entire team.

The Golden State Warrior star, who visited the White House during the Obama presidency, said on Friday that doesn’t want to go to Washington but that the team would decide collectively.

He also suggested that not attending would be part of the resist-Trump movement brewing among athletes, saying it would be an “opportunity to send a statement that hopefully encourages unity, encourages us to appreciate what it means to be American, and stand for something.”

Curry himself has not commented on Trump’s tweet, but other athletes and celebrities have called out the president.

Lesean McCoy, a running back for the Buffalo Bills, tweeted: "It's really sad man ... our president is a asshole."

“Perhaps it's not a great honor while your stench is there,” singer John Legend wrote.

“It's like that little rich spoiled kid saying you can't play with his toys because you beat him at kick ball on the playground! #Dotard,” unsigned NFL star Reggie Bush wrote.

Curry’s wife, Ayesha responded to Trump saying: “🙄Okay… Donate to earthquake relief here!!!” with a link to the UNISEF website.

Actor Jesse Tyler Ferguson wrote: “It’s an honor when the president is honorable.”

ESPN host Jemele Hill, who recently targeted the president when she called him a “white supremacist” welcomed Curry to the club then addressed Trump by saying: “You can’t be uninvited to something you weren’t going to anyway.”