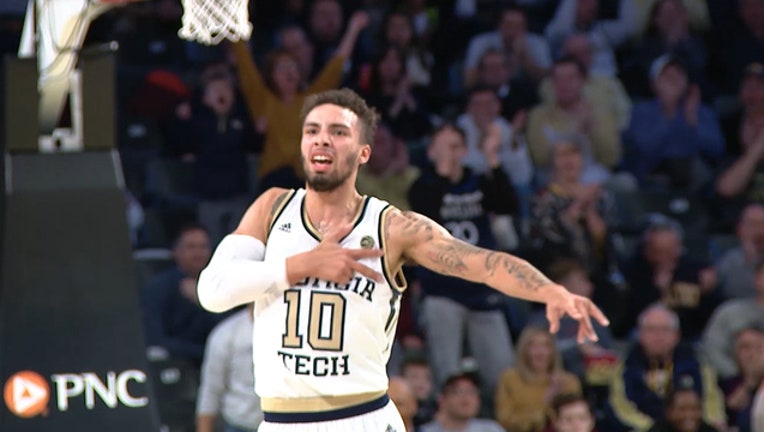 SYRACUSE, N.Y. (AP) - Georgia Tech coach Josh Pastner says the only way for his team to survive is through its defense.

In that case, the Yellow Jackets may do more than survive.

Georgia Tech, who holds opponents to 63.1 points per game, stifled Syracuse all game, limiting the Orange to 18-of-57 shooting from the field and just 7 of 33 from beyond the arc. Syracuse's top three scorers, Tyus Battle, Elijah Hughes and Oshae Brissett were a combined 11 of 34. Brissett's 15 points, all in the second half, led Syracuse. Hughes added 12 points and Battle chipped in with 11.

Curtis Haywood II had 15 for the Yellow Jackets.

"We just mix and match and we do the best we can. Our mentality is through defense and through our defensive mindset."

Syracuse coach Jim Boeheim was impressed with a Georgia Tech team that has held high-powered No. 3 Tennessee and No. 9 Virginia Tech in check.

"Georgia Tech's defense was just too physical for us tonight. We obviously settled for too many 3s but it's a difficult defense to get inside. You have to make some from the perimeter and we didn't."

Georgia Tech had a 27-26 halftime lead but outscored Syracuse 46-33 in the second. The Yellow Jackets started the second half on a 17-5 spurt to build to a 44-31 margin, sparked by two 3s by Alvarado. Two 3s by Buddy Boeheim brought the Orange to within 10 at 51-41 with 10:14 to go, but Syracuse would get no closer. The Yellow Jackets eventually extended their lead to 51-33, their largest of the game, on a layup by Alvarado with 12:13 to go. Alvarado had 13 points in the second half.

"I got some good open shots. I shot them and I made them," said Alvarado, who was 5 of 6 from the field and perfect 3 of 3 from beyond the arc. "We tried to feed the big men and they did a good job but every game for us is defense. We rely on defense. Defense. Defense. Defense."

Meanwhile, it's back to the drawing board for Syracuse, who has the daunting task of playing No. 1 Duke on Monday.

"The last two games we've had 15 turnovers, 19 turnovers. We can't play at that level, make those kind of mistakes," Boeheim said.

"We're dropping it, forgetting about it, (Saturday's game)" Brissett said. "We need to pick ourselves back up starting right now, not tomorrow. Just thinking about them (Duke) should pump everyone up. We want to go there and showcase our skills."

Georgia Tech: The Yellow Jackets defense will keep them in games all year. Prior to Saturday's win, Georgia Tech held high-powered Virginia Tech to just 52 points and their defense is among the leaders nationally.

Syracuse: Things don't get easier with a road game Monday against Duke. The Orange, who had little margin for error entering Saturday's game, has none now, and the team is severely challenged on offense.

Josh Pastner said it was a gut feel and his gut paid off, inserting Haywood and Abdoulaye Gueye into the starting lineup.

Buddy Boeheim made his first two 3s in ACC play. The Orange will need a spark from Jim Boeheim's son off the bench to help its inconsistent offense.

Tyus Battle continues to struggle from beyond the arc. He's now 4 of 21 from 3 in his last six games.

The Orange heads down south for a matchup Monday against No.1 Duke.