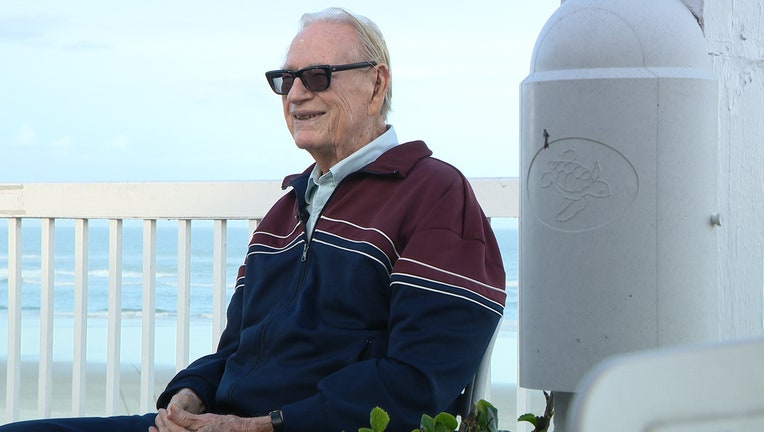 “And it’s been a few years now since I’ve passed the 78 years that the actuarial scientists allotted to me, so I do tend to look back,” he said recently in Daytona, Fla., the native Georgia son’s winter home.

And there’s quite a life to look back on as Pinholster prepares to be inducted into the Atlanta Sports Hall of Fame.

He coached men’s basketball at Oglethorpe University from 1956 to 1966, and in what seems like a short tenure, became a legend.

“He has been the mentor and the icon and the North Star of our Oglethorpe University for so long,” said Director of Men’s and Women’s Golf Jim Owen.

Pinholster’s byline is stamped on books about basketball. That legacy started with a new concept he invented: the wheel offense.

He put Oglethorpe on the map, beating big schools as a university with only a few hundred students.

One of the most notable games was in 1961: a 64-47 win over Rhode Island -- the first integrated basketball game played in Georgia.

“They enjoyed the trip thoroughly except the game,” Pinholster laughed. “He told me that they had a black ball player, and I said, ‘We really do not care. Oglethorpe was founded in 1835, and to my knowledge, no student of any creed, race or color has ever been turned down at this college, if you see that as an oasis of acceptance.’

“I was a Southerner, and some folks looked at them a little skeptical. And I kind of wanted to prove a point that we were open-minded and would measure anybody on their ability and their talent, not any other way other than that.”

Garland Pinholster to be inducted into Atlanta Sports HOF

Next weekend Garland Pinholster will be inducted into the Atlanta Sports Hall of Fame.

In 1963, Pinholster coached the U.S. Olympic basketball team to gold in the Pan Am games in Sao Paulo -- one of his most memorable stints.

“Unbelievable,” he reminisced. “You always hear people say when you see that flag go up, it’s a choking feeling. And it really is.”

He’s already enshrined in the Oglethorpe Athletic Hall of Fame and Georgia Sports Hall of Fame, but this one is extra special, because it has the word “Atlanta” in it.

“I’m going to fly up for the occasion and fly back and finish up my winter down here, so that tells you how much it means to me,” Pinholster said. “I’m really looking forward to seeing some Oglethorpe folks and some friends and gosh, I’m just amazed that they’re putting me in with all these professional athletes that are so talented. I mean, just think about Hank Aaron. I’m going in with Hank Aaron and people like that.”
“He joked about how he didn’t deserve to be in the Hall of Fame with all these great names,” Owen said. “And I kind of jabbed him back and said, ‘I’m not sure all these great names deserve to be in the Hall of Fame with you.’”

Pinholster said his greatest accomplishment is seeing the “boys” from those teams all those decades ago go on to have successful lives, families and careers.

“I thought when I was young and we were doing these things, coaching the Pan Am team and that sort of thing, this was the greatest thing in life,” Pinholster said. “And it was wonderful. But this is pretty good, too. To see these fellas and the families they’ve raised and their achievements in life, built businesses and their professions. You know, I take an awful lot of pride in that.”

This story was reported on from Atlanta.