To the delight of fans young and old, an English bulldog named Uga has been stationed on the sideline at all but one Georgia home football game since 1956.

Charles Seiler, whose family has bred and cared for each of the Ugas all these years, said lots of people have told him they enjoy seeing the dog, adorned in his jersey with the big “G” on front, as much as the games themselves. Thousands of fans have their pictures taken with him.

“He’s so approachable,” Seiler said. “But in this day and age, because of what’s going on, it’s not good to approach.” 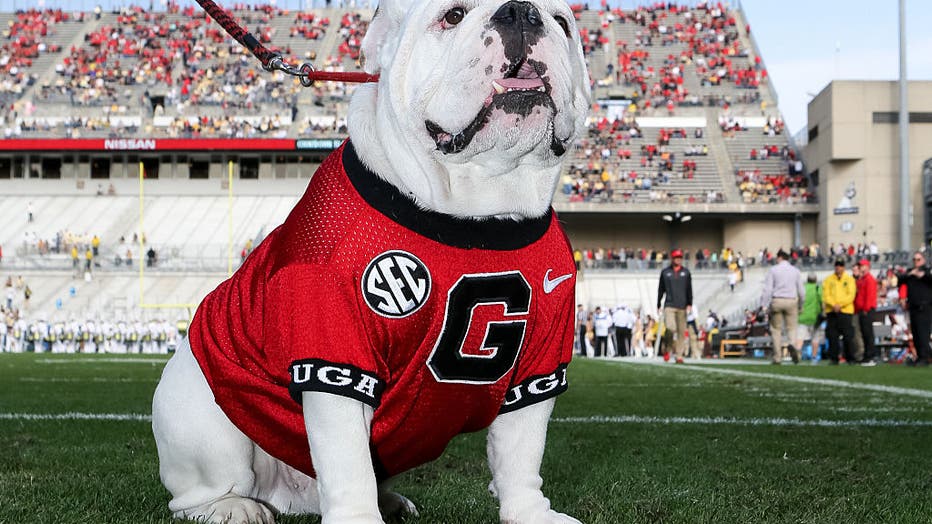 Uga X won’t be on hand for any games this season unless the Southeastern Conference changes its policy not allowing live mascots as part of its coronavirus precautions.

Many other beloved traditions, some dating to the 19th century, also are on hold or taking different forms this year because of the pandemic. The Grove at Mississippi is closed. War Eagle flights are grounded at Auburn. Fans won’t “Gather at the Paw” after games at Clemson.

These traditions and others are extremely meaningful, especially in the South, said Andrew McIlwaine Bell, who wrote “The Origins of Southern College Football: How an Ivy League Game Became a Dixie Tradition.”

“They create community and give people from different walks of life an awareness of their shared history and culture,” Bell said in an email to The Associated Press. “For many of us, game day rituals also bring to mind generations past, including departed friends and relatives who shared our love of college football and would enjoy seeing a modern game if they could somehow be here with us again.”

Some traditions will go on: The Ramblin’ Wreck (1930 Ford Model A) still leads Georgia Tech onto the field, Clemson players still touch Howard’s Rock before running down the hill. The Sooner Schooner is rolling along at Oklahoma.

Georgia, which opens at Arkansas on Saturday, plays its first home game Oct. 3 against Auburn and will allow about 16,000 fans inside Sanford Stadium. Uga, which stands for “University of Georgia,” will spend that day and other game days with Seiler and his family in Savannah, Georgia.

“We’ll have the game on, we’ll put his jersey on, and he’ll be able to listen to it,” Seiler said. “I have a feeling the networks are going to run out of stuff to show, so I wouldn’t be surprised if they don’t try to catch me on a Zoom or maybe a video of him on game day sitting at the house.”

The only time Seiler can recall an Uga missing a home game was in 2009. Uga VII had died two days before the game, and Uga VIII wasn’t in place until the following week.

Diane Roberts, author of the 2016 book “Tribal: College Football and the Secret Heart of America,” said college football “organizes our identity for us” and fans had hoped the season would go ahead so “none of our sacred rituals would be lost.”

The Grove has been the place to be for pregame socializing since the 1950s and is famous for students and older fans dressing to the nines: men in slacks, coats and ties and women in sundresses or cocktail dresses.

Other traditions that won’t be the same this season:

Auburn’s walk down Donahue Drive has been a tradition since the 1960s. LSU’s team and coaches — including an ebullient coach Ed Orgeron — walk down “Victory Hill,” a procession that also involves the band.

Texas A&M’s Midnight Yell practices have moved online. A tradition that dates to 1931, Midnight Yell is held at Kyle Field before home games and is attended by thousands of fans. Smaller versions are also held near the site of away games.

GATHERING AT THE PAW

Clemson fans head to the field shortly after the game and join players and coaches for autographs and photos while the band plays the alma mater.

With no fans in Big Ten stadiums, there’ll be no bouncing up and down between the third and fourth quarters at Camp Randall Stadium in Wisconsin during the song “Jump Around” by House of Pain.

The white horse named Traveler, whose rider is dressed as a Trojan warrior, has appeared at Southern California home games since 1961. He’ll stay in the stable this year unless the Pac-12 decides to play.

At Florida State, the Appaloosa horse Renegade and the rider portraying Chief Osceola will still dash to midfield before each home game to spike a flaming spear into the turf. They aren’t allowed to remain on the sideline, as is custom.

Texas’ pregame entertainment zone is closed, so there is no parade of cheerleaders, the band and Bevo into the stadium. The beloved 1,800-pound longhorn still hangs out in the end zone, but no photo opportunities. Still, “when you are as big as Bevo, social distancing pretty much takes care of itself,” said Ricky Brennes of the sponsoring Silver Spurs Alumni Association.

At Colorado, Ralphie VI’s debut is on hold while the Pac-12 decides what to do this fall. Ralphie V retired after last season. This would be the 54th season a live buffalo has led the team onto the field at the start of games and before the second half kickoff.