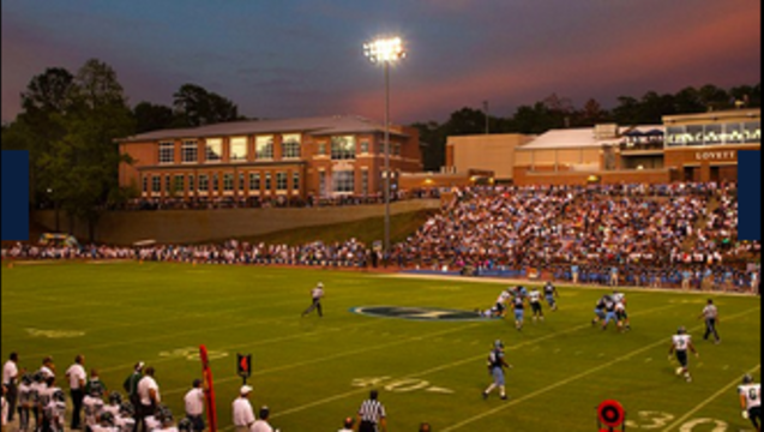 Tonight, the four schools who will make the playoffs at the top of the region are all jockeying for better seeding as Cedar Grove travels to Westminster and Pace Academy makes the short drive to The Lovett School. Lovett is the only one of those teams that hasn't won a state championship recently. Pace and Westminster both won state titles in 2015 when the Knights were still playing in double-a, and Cedar Grove captured their first state championship in 2016 under head coach Jimmy Smith.

When Pace and Lovett meet at Kilpatrick Stadium and Conley-Oakley Field in the High 5 Sports Game of the Week, it will be only the fifth meeting between the schools, but that doesn't mean their brief history together isn't big news on the banks of The Hooch and along West Paces Ferry Road.

"These kids run into each other at the grocery store," said Lovett Sports Information Director, Perry McIntyre. "A lot is at stake because they're playing for seeding in the region. We're expecting this game to be close, more in line with last year's 17-14 game."

The Lions lost that game and eventually ended their season with a second round playoff loss to GAC. This year Lovett (3-4) and Pace (4-3) are running out chances to improve their lots with only two regular season games remaining after Friday night's showdown.

Lovett has a losing record, but their non-region schedule has been especially tough in 2018, losing to ranked teams GAC, Marist and Mary Persons before dropping their first region game to second-ranked Cedar Grove. The Lions have been battle tested which should make them more prepared for a tough visiting Knights team coached by former New England Patriots linebacker Chris Slade. Pace has a signature win under their belt, beating single-a giant, and four-time GHSA state champion Eagle's Landing Christian Academy 17-16 in week two.

McIntyre says the game will likely come down to four or five bigs plays, and whoever makes them will come out on top. The Lions feature one of the top pro-style quarterbacks in the nation in Blaine McAllister. Defensively, they employ the familiar 3-5 scheme of coordinator George Pribish, who's in his last season calling the shots for Muschamp's defense. Lovett features a strong and talented group up front anchored by University of Pennsylvania commit Will Seiler. Sophomore defensive back Collin Goldberg has been a pleasant surprise, leading the team in interceptions after seven games.