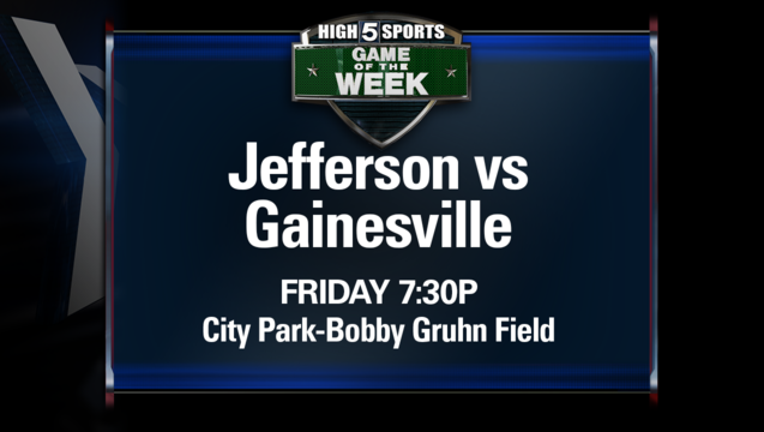 GAINESVILLE, Ga. (FOX 5 Atlanta) - It could be the biggest thing that's happened in Gainesville since favorite son Jesse Jewell started the poultry industry back in the 40s.

Friday night's High 5 Sports Game of the Week is coming to City Park as the Red Elephants host that "other" city school just up the road in Jefferson. Gainesville claims 36 championships across all sports in the school's storied history, while Jefferson says they've won 55.

"Like us, they've got a long tradition of winning," Gainesville Athletic Director Adam Lindsey told us. "They go into every game expecting to win and that's what we have to do too... Jefferson is always a heated rivalry being that it's two city schools that are 18 miles apart and you don't even have to take a turn off the highway to get to either one. You hear stories about back when towns would shut down and go to the game on Friday night, and you're talking about two communities that still do that."

In truth, there really isn't much football history or tradition between the two schools. The young rivalry is only three years old, with Jefferson winning all three contests, most recently a 42-10 victory over the Red Elephants in 2018. Gainesville head coach Heath Webb has his team heading in the right direction, winning two of its first three games including a surprising win over a ranked Mary Persons team on the road to open the season. Friday night the Red Elephants will have their home crowd behind them, but expect plenty of Dragon faithful at Bobby Gruhn Field.

"It's absolutely the most beautiful football stadium in the state without a doubt," said Lindsey. "It starts for us with the Elephant Walk with the band and the cheerleaders lining the walkway of the stadium for the football players whenever they get off the bus. It reminds you very much of a college atmosphere."

Adding to the excitement; it's Gainesville's homecoming, and they're staging a "Gold Out" for childhood cancer awareness during the game.

Gene Cathcart's Jefferson Dragons are 1-1 and ranked in the top 10 in AAA. They suffered an opening week loss to Oconee County before throttling West Hall 62-7 two weeks later. Last week's game with Southside, SC was canceled due to weather.

So, it's a game of chicken in Gainesville Friday night. The only question remaining is which team will yield to the other at City Park. Bill Hartman, the dean of Atlanta high school sports reporting, will provide live coverage on FOX 5 beginning at 5p.m. A full game report will appear on High 5 Sports at 11p.m. and on High5Sports.com.