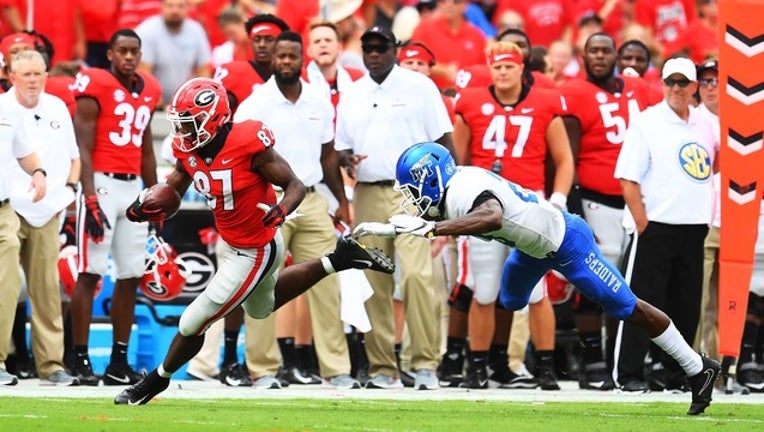 Tyler Simmons #87 of the Georgia Bulldogs carries the ball for a 56-yard touchdown against Desmond Anderson #25 of the Middle Tennessee Blue Raiders on Sep. 15, 2018, at Sanford Stadium in Athens, Georgia. (Photo by Scott Cunningham/Getty Images)

ATHENS, Ga. (AP) - Jake Fromm threw three touchdown passes and Elijah Holyfield ran for 100 yards, each playing only the first half, as No. 3 Georgia overwhelmed Middle Tennessee 49-7 on Saturday.

Georgia led 42-7 at halftime. It was an impressive warmup for the Bulldogs' stretch of seven straight Southeastern Conference games, beginning with next week's visit to Missouri. There were clouds but no rain in the game that was moved up to a noon kickoff due to Tropical Storm Florence. The game originally was scheduled to be played Saturday night.

And the Bulldogs turned it into a rout quickly.

Freshman Justin Fields ran 15 yards for a touchdown last in the first half and threw a touchdowns pass in relief of Fromm. Jeremiah Holloman caught three passes for 90 yards, including an 11-yard scoring pass from Fromm in the first quarter. Holloman was one of five Georgia wide receivers to combine for six touchdowns.

Mecole Hardman had a touchdown catch and a 70-yard punt return touchdown, and Tyler Simmons had a 56-yard touchdown run.

Holyfield became the first player to run for 100 yards this season for Georgia (3-0), which continued to use a committee approach to replace the 2017 senior tandem of Sony Michel and Nick Chubb.

Patrick Smith scored on a 41-yard pass from Brent Stockstill for the Blue Raiders (1-2). Smith had nine catches for 77 yards.

D'Andre Swift started at tailback but didn't return following the Bulldogs' first two possessions. Swift stood on the sideline the remainder of the game, and there was no immediate word on a possible injury.

Fromm was sharp, completing 10 of 12 passes for 128 yards. The sophomore almost committed a costly mistake on Georgia's second possession when he held the ball too long, was almost sacked for a safety and fumbled near the Georgia goal line. Right guard Ben Cleveland recovered the fumble at the 2, setting up a punt.

Following a review, Middle Tennessee linebacker Khalil Brooks was called for targeting and ejected after leading with his helmet on a second-quarter hit that knocked off Fields' helmet. The drive ended when Fields dropped back to pass before keeping the ball on the 15-yard scoring run.

Middle Tennessee: The Blue Raiders committed far too many mistakes to have a chance for their first win in 16 tries against a Top 25 team. Most frustrating was an inability to score after taking possession at the Georgia 36 in the first quarter. Stockstill was sacked by Deandre Baker on third down before his fourth-down pass was picked off by Baker.

Georgia: Georgia showed good focus against an underdog opponent and again showed impressive depth, especially at receiver. Holloman, who had a 65-yard catch, and Simmons showed their big-play potential and Hardman had his third touchdown catch in three games.

The Bulldogs strengthened their hold on their No. 3 spot in the Top 25. Georgia topped 40 points for the third straight game, again proving itself to be worthy of its high ranking.

Middle Tennessee has a week off before playing at home against Florida Atlantic in a Conference USA game on Sept. 29.

Georgia goes to Missouri next week.