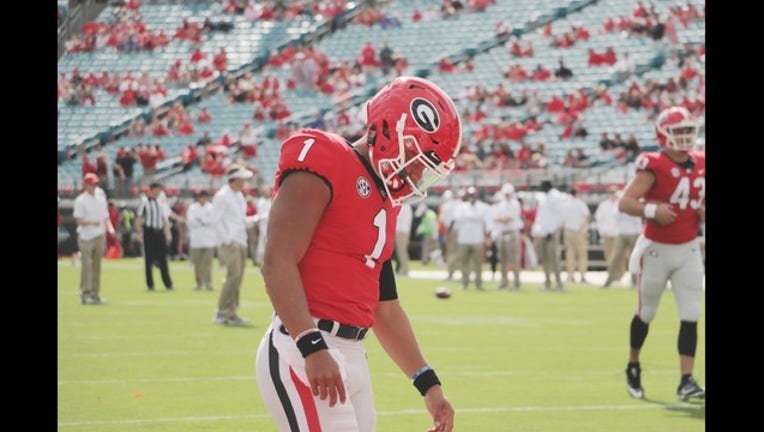 ATHENS, Ga. (AP) - Freshman Justin Fields threw two scoring passes and ran for another touchdown, Tyler Simmons had rushing and receiving scores, and No. 5 Georgia protected its playoff hopes by overwhelming UMass 66-27 on Saturday in one of the biggest offensive games in school history.

Another freshman, James Cook ran for 76 yards on only three carries, including his first two career scoring runs, from 26 and 27 yards.

Georgia gained 701 yards, the second-highest total in school history, including 426 yards on the ground. The Bulldogs never punted.

Fields led the Bulldogs with 100 yards rushing, including a career-long run of 47 yards and a 3-yard scoring run. He completed 5 of 8 passes for 121 yards and two touchdowns, making another step in shedding his reputation as a run-first quarterback.

"I'm glad Justin got a chance to show he can do more than run," said tailback Elijah Holyfield, who ran for 50 yards with a 5-yard touchdown.

Georgia (10-1) leaned on its quick-strike offense on six scoring drives lasting no more than four plays. Starter Jake Fromm and Fields shared time at quarterback as the Bulldogs avoided looking ahead to next week's state rivalry game against Georgia Tech or the Dec. 1 Southeastern Conference championship game against No. 1 Alabama.

Highlights for the Minutemen were Andy Isabella's second-half touchdown catches of 75 and 45 yards from Ross Comis. Isabella, one of the nation's leading receivers, capped his career with 15 catches for 219 yards and two touchdowns.

"I know the score got a little out of hand, but we went out there and kept fighting," Isabella said. "They're big up front and I think it was hard for (Comis). He didn't have much time, and I know he was getting rushed."

Georgia scored touchdowns on seven of its first eight possessions. The one exception was Terry Godwin's lost fumble attempting to field a punt in the first quarter. Joseph Norwood recovered at the Georgia 16 to set up the lone touchdown of the half for the Minutemen, a 5-yard run by Marquis Young.

Finally, with 9:58 remaining in the third quarter, the Georgia offense was stopped short of the end zone when Rodrigo Blankenship kicked a 40-yard field goal.

Otherwise, it was a productive half for Fields, Simmons and the Bulldogs. Simmons' 49-yard run around right end capped Georgia's three-play touchdown drive to open the game. Simmons added a 71-yard scoring catch from Jake Fromm early in the second quarter.

Fields' 47-yard run on his first possession set up his 11-yard touchdown pass to Riley Ridley.

Third-string quarterback Matthew Downing took over for Georgia to open the fourth quarter.

Comis completed 23 of 31 passes for 278 yards with two touchdowns and one interception.

UMass: Isabella, a semifinalist to win the Biletnikoff Award given to the nation's top receiver, left a strong impression on the Bulldogs. Even when matched against Georgia's top cover cornerback, Deandre Baker, Isabella was difficult to defend. The UMass defense, also beaten in a 55-21 loss at Boston College on Sept. 1 in its only other test against a Power Five team, couldn't find a way to slow the Bulldogs.

Georgia: Fields continued to emerge in a more prominent role for Georgia. Known more for his running earlier this season, Fields showed impressive touch on deep passes, including his 57-yarder for a touchdown caught in stride by Mecole Hardman. "He's getting better with his vision down the field," said coach Kirby Smart of Fields, who also threw an 11-yard scoring pass to Riley Ridley.

Linebacker Monty Rice did not play and finally came on the sideline midway through the first quarter on crutches, wearing a boot on his left foot. Smart said Rice was hurt while "planting and driving" during pregame warmups, and he said the severity of the injury was not known.

Favored by 41 points, Georgia delivered the lopsided win needed to likely protect its No. 5 spot in the Top 25.

Georgia: The Bulldogs close their regular season at home with their annual state rivalry game against Georgia Tech on Saturday.