Rechsteiner hopes to pin down a spot in the NFL

WOODSTOCK - Kennesaw State football held their pro day on Wednesday, March 11th. That night, you may remember, was when an NBA player tested positive for coronavirus, setting off a chain of cancelations around the sports world. That meant most college football programs did not get to hold a pro day; though one Owls player is probably especially glad that Kennesaw State did.

The former standout at Kennesaw State put up an impressive performance at the Owls' pro day, putting up 35 reps on the bench press. That mark would have been third best at the NFL Scouting Combine out of all players, and the best of any running back. Rechsteiner was listed as a fullback in college, but was not prototypical of the position: in KSU's option offense, he led the team with 909 rushing yards last season, averaging over 8 yards per carry. 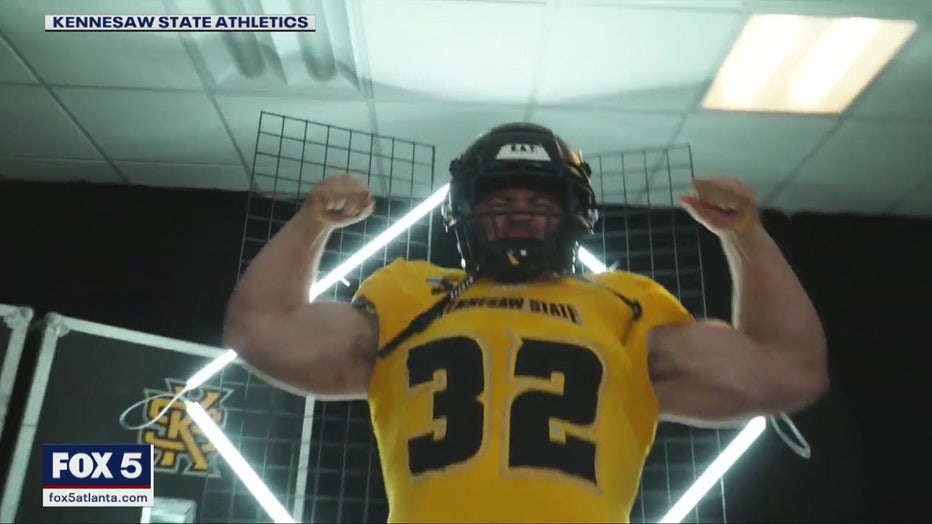 As for championship pedigree, Rechsteiner is all set. He is the son of Rick Steiner, a pro wrestling star with a career spanning three decades, from the 1980s through the 2000s. Together with his brother Scott Steiner, they formed the Steiner Brothers, a former WCW and WWE tag team championship combo.

"My dad and uncle ... the guy you saw on TV was pretty much what was happening at home!" said Rechsteiner.

The Steiner Brothers were known as tough guys in the pro wrestling world -- Rick was a college wrestler, which influenced Bronson to wrestle at Etowah High School. Rechsteiner credits high school wrestling for some of his work ethic, along with his dad. Rechsteiner was a three-sport athlete at Etowah, also playing baseball.

As for his famous father, Rechsteiner says he was never pressured into or away from any particular sport. He did face high expectations in anything he set out to do.

"[My dad is] a very old school, strict guy," said Rechsteiner. "I had to toe the line all the time growing up. No exceptions, you know? Growing up he taught me how to be disciplined about my training, try to give everything I have in whatever I'm doing. He set me up for success for the future to come in high school. When I got to college, he was the best trainer you could get."

So Rechsteiner is looking for a shot at the title; the title of pro football player. But, he says, when that sport is done, he's thinking about pursuing a career in the squared circle, giving pro wrestling a shot, just like his dad.