SCOTTSDALE, Ariz. - Justin Fields and Trevor Lawrence went to high school about 20 miles from each other in the suburbs northwest of Atlanta.

They have worked out since middle school with the same quarterback trainer, a former Pac-12 QB and full-time firefighter who is more well-respected than well-known in the business.

Lawrence and Fields were the Nos. 1 and 1a recruits in the class of 2018, competed at the same Elite 11 camp and have been linked for most of their young lives despite never pla

ying in the same football game. 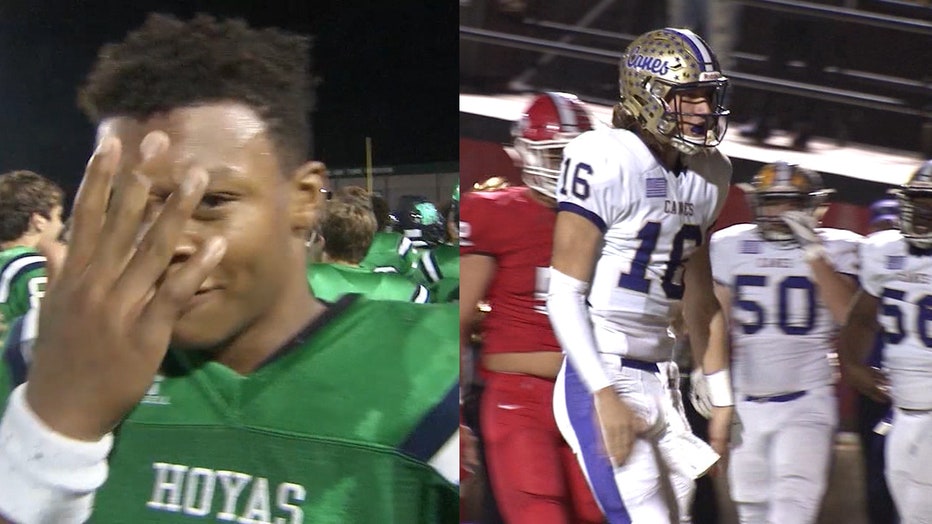 The rivalry becomes real Saturday when Fields and No. 2 Ohio State take on Lawrence and No. 3 Clemson in the College Football Playoff semifinal at the Fiesta Bowl. It could be the start of something big.

"This is the future of the NFL playing in this game," said Ohio State defensive coordinator Jeff Hafley, who spent seven years as an NFL assistant. "For the next 10 years you have, God willing they both stay healthy, you have these two guys leading the way."

Fields, who went to Harrison High School in Kennesaw, Georgia, and Lawrence, who attended Cartersville High School, are more friendly than close friends.

"It's funny we have to come across the country to finally play each other," Lawrence said Thursday at Fiesta Bowl media day.

The first connection between Fields and Lawrence is Ron Veal, who played quarterback at Arizona in the late 1980s and now lives in the Atlanta area.

Veal started working with young quarterbacks in 2002. The personal QB business has boomed since then and created some superstar coaches who attract and seek out players with blue-chip potential. That's not Veal. He is now part of a group of trainers called the Quarterback Collective and he trains up-and-coming passers of all kinds as a side gig to firefighting.

"Some other quarterback coaches, they brand themselves better," Field said. "He doesn't really care about all the glamour. He just wants to see the guys that he trains have success."

That seems to be a perfect match for two prodigies whose priorities were self-improvement, not the spotlight.

Veal began working with Fields when he was in sixth grade and Lawrence when he was in seventh. Mostly, their sessions were one-on-one with Veal, but at least once Lawrence came to Fields' high school for a joint session before both went off to college. It was not particularly eventful for either quarterback. Instead of sizing up each other, they were more interested in going about the business of getting better.

"They work like nobody's business," Veal said. "You know, when they came to a session there was really no talking between me and the kid. It was self-correction and correction. They put in the work to get where they are and then the natural ability and a natural talent surfaced. But they just work at it."

"They wanted to be different," Veal added.

Lawrence was the more advanced of the two heading into high school. Veal attributed that to Fields spending a lot of time playing youth baseball.

Lawrence was a four-year starter at Cartersville, a 3A high school. Clemson quarterback coach Brandon Streeter got his first look at Lawrence after the quarterback's freshman season and could hardly believe what he saw.

"No flaws that I could see," Streeter said. "You knew at that moment that this kid had something special."

While Lawrence was drawing interest from Clemson, Fields' first offers came from North Carolina, Duke and Wake Forest. Fields said going to camps with players like Lawrence motivated him to want more.

"He has an offer. How come I don't have an offer? I think we're the same in talent," Fields said. "I kind of always had a chip on my shoulder."

Fields broke out his junior season at Harrison, a 6A high school in Georgia's second-largest classification.

By the summer heading into their senior seasons, Lawrence and Fields had become the top two quarterback recruits in the country. They were selected for Elite 11, a camp where top prospects train and compete on the field, spend time in the film room and are taught how to become a leader.

Lawrence and Fields weren't just the top two players in their Elite 11 class but two of the most impressive in the 22-year history of the competition.

"When they showed up, they had a factor we hadn't seen very often," said Yogi Roth, an analyst with the Pac-12 Network who has been working with Elite 11 for 12 years. "They were meticulous in their commitment to the craft."

Lawrence committed to Clemson before his junior season and never wavered. Fields committed first to Penn State, then changed his mind and landed at Georgia.

The 6-foot-6, 220-pound Lawrence immediately lived up to his billing, leading Clemson to the national championship as a freshman last year. Meanwhile, the 6-3, 225-pound Fields spent last season backing up Jake Fromm at Georgia.

"Facing that adversity and just going through that I think it just helped me a lot as a person and also as a football player," Fields said.

Fields transferred to Ohio State and this season he, too, has proved worthy of all the hype, throwing 40 touchdown passes and only one interception.

Fields and Lawrence each have at least one more season of college football left, but it's not hard to see where this could lead.

They will head into next season as Heisman Trophy front-runners and then -- if they both skip their senior seasons for the NFL -- into draft season competing to be the first quarterback and maybe even first player selected.

"I think that would be pretty cool to see."

It is not far-fetched to envision Lawrence and Fields leading NFL teams for more than a decade as two of the league's biggest stars.