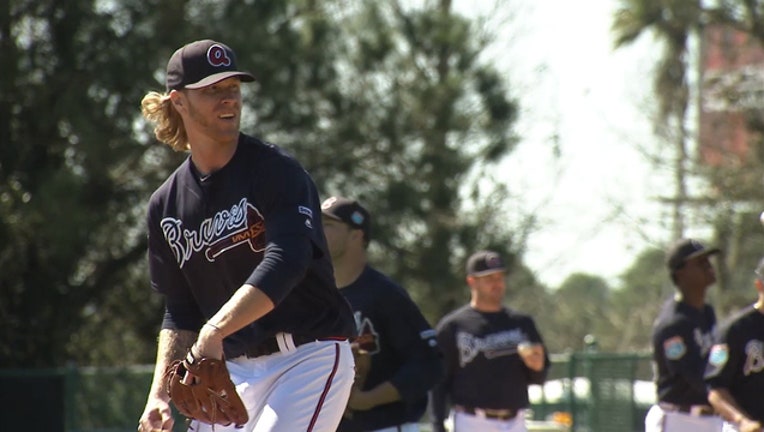 The right-hander worked six strong innings, Nick Markakis and Erick Aybar had two RBIs apiece and the Braves kept the St. Louis Cardinals down at home with a 6-3 victory on Sunday.

Matt Kemp added two hits and an RBI to help the Braves take two of three, outscoring the Cardinals 19-8 the last two games. Atlanta has the worst record in the majors at 41-70, but has won seven of its last 11 overall.

Counting a six-run ninth, they scored 12 runs in three innings.

"The guys are something else, I tell you," interim manager Brian Snitker said.

Adam Wainwright (9-6) had a rare off-day against Atlanta, surrendering three runs in the first and second. He entered 8-2 with a 2.95 ERA against the Braves, who drafted him in the first round in 2000 and traded him to St. Louis in 2003 in a deal for J.D. Drew.

"We needed to win that game," Wainwright said. "I'm sorry we didn't, that was my fault, but the luck was certainly not on my side and sometimes you need it."

"It's pretty dadgum dark, but nobody in this clubhouse is quitting," Wainwright said. "We just need our starting pitcher to go out there and not give up six in the first two innings and give the team a good chance."

Brandon Moss had a sacrifice fly and double and Yadier Molina had three hits and an RBI for St. Louis.

Foltynewicz (5-5) gave up a run and six hits, plus singled and scored his first career run in the second. In his previous three outings, he allowed 14 earned runs in 16 1-3 innings.

"It was awesome to see a lead like that, especially with their ace," Foltynewicz said. "That's what starting pitchers should do — that's your job to get deep into games and give your team the best chance to win."

Jim Johnson earned his eighth save in 11 chances.

Braves third baseman Adonis Garcia made an outstanding stab down the line to turn a double play on Jhonny Peralta in the sixth. Right fielder Nick Markakis made a diving catch on Wainwright's shallow pop fly to end the fourth.

"The defense was amazing," Foltynewicz said. "I was grinding since pitch one."

Atlanta's Ender Inciarte singled and scored in the second and has an 18-game hitting streak, matching his career best set in 2014. He's batting .380 (27 for 71) during the run.

"Kind of the kid we've been waiting to see, I guess," Snitker said.

Aybar had a two-run triple in the second and has hit in 12 straight.

Braves RHP Madison Younginer was put straight to work after his contract was purchased from Triple-A Gwinnett and he had a rough debut, allowing two runs while getting two outs. Atlanta claimed RHP Chaz Roe off waivers from the Orioles and designated OF-IF Brandon Snyder for assignment.

Cardinals: 2B Matt Carpenter was not in the lineup a day after getting removed with apparent side muscle difficulties. He was activated off the DL on Friday after missing 24 games with a strained right oblique.

Braves: Rob Whalen (1-0, 7.20) makes his second career start on Monday, working the opener of a four-game series at Milwaukee.

Cardinals: Michael Wacha (7-7, 4.35) has won his last five decisions heading into the opener of a three-game series against the Reds.