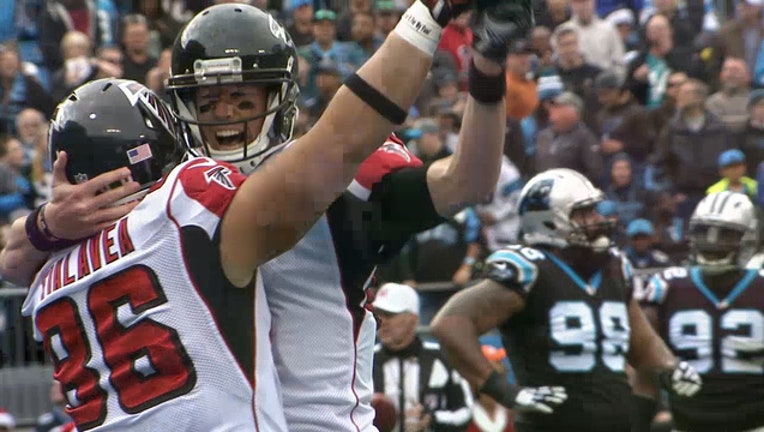 CHARLOTTE, N.C. (AP) - Maybe you too can catch a touchdown pass from Matt Ryan. It's beginning to seem like everyone else has for the NFC South champions.

Five of those players are tight ends, including Joshua Perkins and D.J. Tialavea, who caught TD passes on Saturday in a 33-16 win over Carolina , that helped the Falcons clinch their first division title since 2012.

"I can name all my tight ends," Ryan joked. "It's good to know your teammates."

"It shows he really trusts his training," Falcons coach Dan Quinn said of Ryan, who came into the game with a league-best 114.8 passer rating. "It goes deeper than that, with the personnel staff to keep finding the right answers, the right guys."

NFL sacks leader Vic Beasley didn't need a monster game for the Falcons to return to the playoffs for the first time in four seasons.

Beasley, a second-year player out of Clemson, rolled into town with five sacks in the past three games ��� three against the Rams two weeks ago. The Falcons dialed up the pressure anyway, and forced Cam Newton into two interceptions with Jalen Collins and Brian Poole each getting their first picks of the season.

"We were able to get them to force turnovers, throw it to a couple of our (defensive backs) and make big plays," said Beasley. "It's a great feeling. It's easy when you're competing here and the offense is up by a lot and playing especially well."

Panthers coach Ron Rivera said wide receiver Kelvin Benjamin played one of his best game of the season, catching four passes for 63 yards and touchdown. It's been a trying season for the third-year pro, coming back from a torn ACL that kept him out of last season while also battling shoulder and back injuries.

"This was probably the best week he had," Rivera said. "It really was and that is what he is capable of. I would love to see it every week."

"You can see the genuine excitement they have for one another when they make plays," Falcons coach Dan Quinn said. "Honestly, when either of them are in, the expectation for them making plays and taking care of things. ... Both of them were disappointed they had to put the ball on the ground last week and that was a real part of their intent, you could see how hard they ran today."

CRASHING BACK TO EARTH

Saturday, neither player saw much daylight. Newton threw two interceptions and finished with 198 yards on 18-for-43 passing, his fifth game in the last six with lower than a 50 percent completion percentage. Atlanta held Stewart to 50 yards on the ground.

"It encompasses a lot of things that I have tried to pride myself on," said Olsen, who led the team with 59 yards on 12 receptions, despite wearing a bulky brace on his injured right elbow. "I'm never the flashiest guy or anything like that, but just try to be productive."

Legendary tight ends have just missed the mark. Tony Gonzalez spent 17 years with the Chiefs and Falcons. He had four 1,000-yard seasons overall. The Cowboys' Jason Witten had a chance for three straight, but fell short by 58 yards in 2011.

The Patriots' Rob Gronkowski was on pace this season for his third straight with 1,000 yards. Injuries cut his season short at a total of 540.