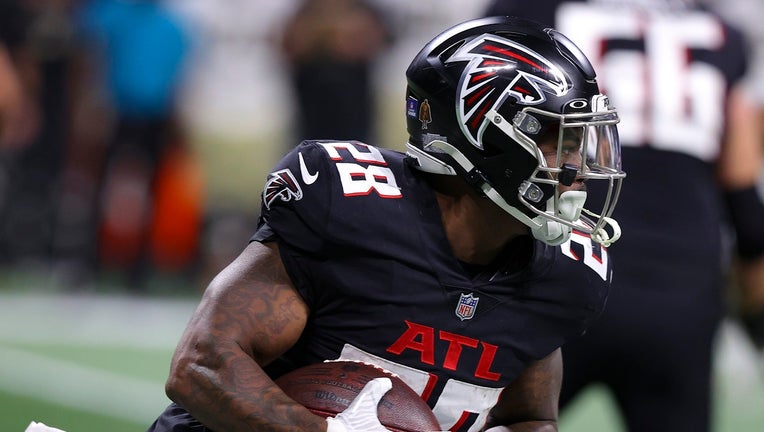 Mike Davis #28 of the Atlanta Falcons rushes during the second half against the New Orleans Saints at Mercedes-Benz Stadium on January 9, 2022 in Atlanta, Georgia. (Photo by Todd Kirkland/Getty Images)

ATLANTA - After a disappointing season with his hometown team, running back Mike Davis was released Monday by the Atlanta Falcons.

The move was not surprising for a team dealing with salary cap woes, especially after the 29-year-old Davis rushed for just 503 yards and three touchdowns last season. He averaged 3.6 yards per carry.

The Falcons signaled they were moving in a different direction during last week’s draft, picking BYU running back Tyler Allgeier in the fifth round.

The team also re-signed Cordarrelle Patterson, who became one of the team’s biggest offensive options lining up at both running back and receiver.

"I appreciate everything the Falcons did for me," Davis, a native of suburban Lithonia, wrote on Twitter "I was able to play for my hometown and impact my community. I appreciate the fans and my family."

Davis was hoping to make a big impact with the Falcons after s igning a $5.5 million, two-year deal ahead of the 2021 season.

He was coming off the best season of his career with Carolina. He led with Panthers with 642 yards rushing and six touchdowns in 2020, while also proving to be an effective option in the passing game with 59 catches for 373 yards and two TDs.

But Davis failed to match those numbers with the Falcons, and his role decreased over the course of the season as Patterson earned a prominent role.

By cutting Davis, the Falcons reduced his $3.5 million cap hit by $2.5 million.

Atlanta is now in a full-fledged rebuilding mode after trading longtime quarterback Matt Ryan to the Indianapolis Colts and learning that receiver Calvin Ridley, who missed most of last season dealing with mental health issues, will be suspended for all of 2022 for betting on NFL games while away from the team.

The Falcons signed Marcus Mariota to take over as the new starting quarterback, selected Southern Cal receiver Drake London at No. 8 overall in the draft, picked Cincinnati QB Desmond Ridder in the third round, and went heavy on offense during the final day of the draft with Allgeier leading the way.

Allgeier set BYU records with 276 carries and 1,601 yards rushing in 2021. He tied for the national lead with 23 touchdowns on the ground.

"We love his yards after contact," coach Arthur Smith said. "The opportunities there in the running backs room are wide open."

The Falcons also signed running back Damien Williams to compete for playing time in the backfield.

Turns out, there was no room for Davis.